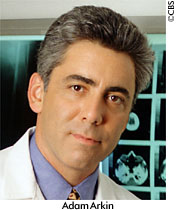 It is important to me that we begin this week's Boyfriend with a disclaimer, to prevent a misunderstanding that I don't want anybody making. The disclaimer is this: I do not watch Chicago Hope. I do not "heart" Adam Arkin because of his role as Dr. Aaron Shutt. I don't even know anything ABOUT Adam and hospitals.

What I know about is Adam and dirt. Adam and gourmet cooking. Adam and sarcastic one-liners. Adam and "Northern Exposure."

Anybody remember that show? It was on waaaaaaaaay back when. Okay, okay, maybe not THAT long ago. But it was one I had my mom tape for me because it was on too late on a school night, if that tells you anything. Now, I loved that show (disclaimer number two: until the last two or three years it was on). It had all the qualities I so value in television programming: quirky characters, witty dialogue, and a certain "literary" quality. I always used to say the episodes ended like e.e.cummings poems -- with a final image that summed up the whole thing so perfectly, you would always remember it.

Of the characters on the show, I was mostly in love with Chris, the philosophical DJ. But that was way back when I was still young and foolish. Now that I'm old and foolish, I can freely admit that my secret favorite character was Adam, played by (guess who!) Adam Arkin.

In the first Adam episode, the town was trying to track down what they thought was a Bigfoot hanging out in their woods (and occasionally coming into town to steal food). But Bigfoot it was not -- what they found in the woods instead was a shabbily dressed, barefoot, sarcastic jerk with a hearty disdain for the world and an incredible talent for cooking.

Gradually, Adam began to make more forays into the town -- taking over the kitchen at the Brick whenever possible and delivering wonderful insults to various characters who needed dressing down ("What, are your synapses not firing?!") He also met and married a hilarious hypochondriac named, aptly, "Eve." While Adam was never anybody's best pal, you kind of got the idea people liked having him around -- there's just something about gourmet chefs with attitude. It doesn't make sense, but who the heck cares?

Now, I'm sure it sounds weird that I would like a guy who was mean to everybody and rarely bathed. But, I gotta tell ya, there's a lot I'll overlook for a good laugh from time to time, and Adam surely made me laugh. He made me laugh a LOT. Plus, you can't go wrong with a gourmet cook. He might irritate the heck out of you, but at least you'll eat well!

As for the real man, Adam Arkin, it's hard to say what I think. I haven't seen him in many other things and I don't know anything about him in real life. Nor do I really want to know, I don't think. There's nothing wrong with being in crush with a fictitious character, people! I keep trying to explain that to you and you just don't get it! In many ways, it's a lot more fun than having a crush on an actual standing-right-before-you kinda person. Absolutely zero stress involved here. Hey, it's my fantasy world and I can do what I want to!

Northern Exposure runs daily on A&E, by the way. It's worth watching (tune in or tape), even if you watched all the episodes back when they were running on REAL television. Especially since you probably didn't realize back then just how darn cute Adam Arkin was with that stringy, greasy hair and big hairy feet.

Yeah, okay, you're right. It IS a pretty weird crush. But it's the unexplainable things like this that make me so damn interesting!

MacGyver Factor Score: 92.7%. Points off for leaving Northern Exposure too soon -- I wasn't ready to see you go! I will refrain from commenting on Chicago Hope.