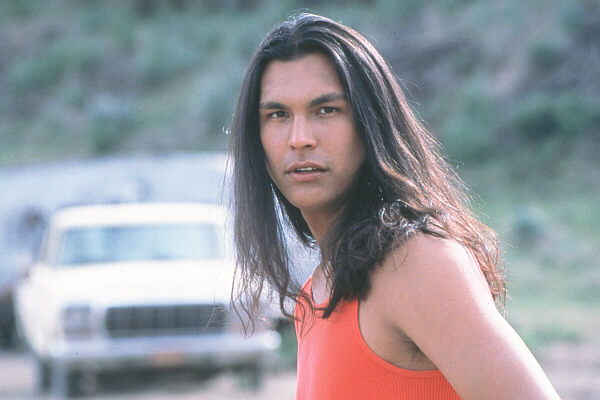 This past weekend, I finally saw a movie I'd wanted to see when it first came out in theaters but never got a chance to. Thank god for VCRs! The movie is Smoke Signals and it's now right on up there on my list of "Movies I Think Deserve To Be Called 'Films.'"

Not only was it intellectually challenging and full of interesting shots, but it starred a really really cute boy! Which was lucky for you guys, because I was having trouble coming up with someone to run this week. Adam Beach plays Victor, a troubled Native American teenager living on a reservation with his mom in Idaho. When his mom gets a call saying his dad is dead (he ran off when Victor was a small child and ended up in Arizona), Victor decides to go down to Phoenix and collect his stuff, even though he has mixed feelings about his father, who was a drunk who used to beat both him and his mother up.

He doesn't have any money, though, and when Thomas (a kid about Victor's age who is kind of a dork) offers to fund the trip, it looks like Victor's got it made. Except for one small caveat -- Thomas won't give him the money unless he gets to go too.

So these two totally different guys head off on the bus down to Arizona. Victor spends a lot of time trying to make Thomas a little cooler and educating him on how to deal with racism and other challenges Native Americans face in modern society and Thomas spends a lot of time telling made-up stories about Victor's father in an attempt, perhaps, to make Victor realize his dad wasn't all that bad. Anyway, eventually they get down to Arizona and Victor has to try to accept his father for who he was, despite the fact he learns something about his dad that changes the way he views his entire childhood.

It's a great look at father-son relationships, as well as what modern life for Native Americans is like. The script was written by Sherman Alexie, whose novels have never impressed me very much, but who has always had an interesting way of presenting the issues Native American people in this country face today. He's good at showing things subtlely -- like racism or the way alcoholism can ruin families, etc. It's a more sobering method than some writers take (instead of beating us over the head with it, he just presents it and lets us work it out for ourselves). He's not confrontational, except that confronting us is exactly what he's doing. Does that make any sense?

Anyway, this is the only thing I've seen Adam Beach in and I was truly impressed. He's gorgeous (I'd kill for that hair!) and very talented and I'm looking forward to seeing him in things to come. If you haven't seen Smoke Signals yet, get yer butt in gear! It's out on video now and it's easily worth the $3 or so bucks it'll cost you. In fact, keep it for two days, pay $6, and watch it twice. Once to see the movie, and once just to see Adam.

MacGvyer Factor Score: 96.8%. Points off for cutting his hair! Nooooo! Not the hair, Adam!!