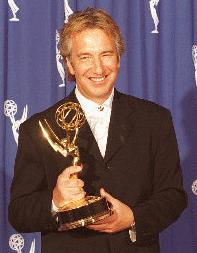 Okay, confession. Kevin never called me and I haven't watched his show in two weeks. But, I swear, these two things are not connected at all. I'm not bitter that none of my boyfriends has EVER called me. Not at all!

And besides, this week will be different. I know this week's boyfriend will call. But here we go again with the crappy pictures! God, do I have to do all the word around here? How come nobody's putting good pictures of people I love on the web anywhere for me to steal? What's up?

You must've recognized him right away by his picture. EVERYBODY knows Alan Rickman. You've probably even entertained the idea of having him as a boyfriend before too. Well you can forget it, babe, he's mine! Memo to Mom: this means you! Alan Rickman is almost as good as they get. He makes me laugh ("The January Man" with ex-boyfriend Kevin Kline), he makes me cry ("Truly, Madly, Deeply") (and, while I'm on the subject, why the HELL is that movie always filed in the comedy section? I've never cried harder in my entire life than I have while watching that movie), AND he makes me swoon ("Sense and Sensibility").

He's even made me kinda mad. I'm thinking specifically of "Robin Hood: Prince of Thieves" and NOT because he played the bad guy. Alan, sweetie, what the heck were you thinking? Yes, bad guys are fun to play sometimes ("Die Hard"), but please, for me, STAY AWAY FROM KEVIN COSTNER MOVIES!

Anyway, Alan Rickman is not just a big cutie. He's smart and you can tell that from how good he is at playing lots of different kinds of characters. I first fell in love with him after about the hundredth time I saw "The January Man" (after a hundred times, I could stop drooling over Kev and notice the rest of the cast). Ed was an absolute delight. But it was really "Truly, Madly, Deeply" that did me in. All it takes is an accent and a cello and I am putty in your hands.

Alan, please please please call me. I just want one date! Nobody else is calling and it just plain stinks! I mean, if YOU made ME the Girlfriend of the Week on YOUR web page, I'd at least call and say "thanks!" Jeez!

MacGyver Factor Score: 95%. Those of you who have noticed the new boyfriend always goes up on Thursdays now may have seen that Alan started out with a MGF score of only 90% because I suspect he may have a bit of a mean streak in him (he can be SO villainous sometimes). But my mom emailed me and told me I'd better bump up the score OR ELSE. Yes, even though I'm 23, I still do what my mother says. Or maybe that's -- NOW that I'm 23, I do what my mother says. Eh, she's right anyway; he's freakin' incredible.