Attention! This week's write-up was written by the great Kim Harmeling, who has graciously offered to contribute the periodical column for the site so that I can goof off more often. If you like her style, be sure to check out the other column she wrote for us a few months ago, on ex-Boyfriend Michael Chiklis. 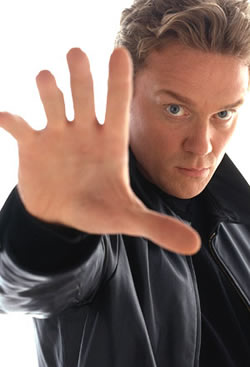 I'm sure that you can imagine my surprise when I tuned into the USA channel several months ago to catch the premiere of "The Dead Zone" and saw this week's Boyfriend. Of course, he hadn't been designated as THIS week's Boyfriend yet, but only because I hadn't seen him in anything for so long his name barely rang a bell anymore. Now, as you know, I've always had a thang for the Underdog, the Geek Boy who just wants you to like him for who he is and is mad about you regardless of how monstrously you treat him and, up until now -- up until I saw "The Dead Zone" -- this is how I always viewed this week's love-of-my-life (wait for it. . .wait for it. . .) Anthony Michael Hall.

At first, I wasn't sure it even WAS Anthony Michael Hall (who just likes to be called "Michael" these days rather than both names, so we'll call him that from now on) and had to look at the credits to be certain. Sure enough, there it was -- his name -- not only in the starring role, but as producer as well! Now, I don't know about you, but my memory holds a nearly indelible picture of Michael as Geek Boy star of a number of very popular John Hughes films from the late 1980's. He was Farmer Ted in "Sixteen Candles," which I just loved because, I mean, who hasn't been at a dance where everything you did or said was emotionally painful or mortifyingly embarrassing? Everyone my age then and now could totally relate to him. And, well, maybe to Molly Ringwald too. But you really had to feel for Ted. Especially during that whole underwear scene. I still have nightmares.

And, to make things even worse for his image, he next showed up as Brian Johnson in "The Breakfast Club" and Garry Wallace in "Weird Science." Both characters were the very definition of "dork" -- highly intelligent but almost unsaveably geeky kids that just couldn't fit in, no matter how hard they tried. These performances connected his name and face with the stereotype for an entire generation, maybe two generations, of filmgoers. In order to fight the typecasting, he turned down roles in "Pretty in Pink" and "Ferris Bueller's Day Off," but did work with Chevy Chase in "National Lampoon's Vacation" (as Rusty, the too skinny, too-80's-haired dorky son of main character Clark Griswold). The "Vacation" role may have led to his next gig -- as the youngest regular cast member to ever appear on the show "Saturday Night Live." Unfortunately, he only lasted one season because he ran into some trouble with substance abuse (considering the company he was keeping it's hardly any wonder -- all the greatest drug addicts got their starts on SNL). To his great credit, he gave up one of the best jobs of his career and checked himself into rehab. Finally, in 1990, he gave up alcohol for good and he's been sober ever since. You've gotta admire a guy who has the strength to do that. That. Just. Rules.

In between his high-visibility roles in the John Hughes movies and the time when he burst back into my consciousness in "The Dead Zone," Michael has had a continual stream of smaller roles in TV and movies where, much to my great surprise, he GREW UP. He had some interesting and varied parts in smaller films -- playing Winona Ryder's mean boyfriend in "Edward Scissorhands;" as a gay man living on the street in the critically-aclaimed "Six Degrees of Separation;" and then a starring part as Microsoft moneybags Bill Gates -- which I personally thought was a casting stretch but which didn't turn out badly at all -- in the Emmy-nominated TNT original movie "The Pirates of Silicon Valley" (opposite ex-Boyfriend Noah Wyle of "ER" fame). Looking at him now, though, you'd never know he was a skinny, pencil-neck, calculator-packin' Geek Boy. He has filled out rah-thah nicely, and who knew he'd have such dazzling blue eyes (jeepers creepers peepers!). Yes, my friends, he has grown up very, very nicely. Very, very nicely indeed.

Now for a little biographical background on our Boy. He was born Michael Anthony Thomas Charles Hall (what, his Mom couldn't make up her mind? I can hear his agent now -- "Just pick two and go with it, kid!") on April 14, 1968 in Boston, Massachusetts. His mother, Mercedes Hall, is an actress-singer and his stepfather is a theatrical agent. His sister is also a performer. Though he briefly dated Molly Ringwald during their Brat Pack days, he's been with his soulmate, Teresa DeSaint, since 1990. You gotta admire loyalty like that in a man, don't you? Twelve years they've been together without feeling the need to get hitched, and they're still goin' strong. That's eons longer than most Hollywood types who actually DO head to the alter. What this says about marriage, I prefer not to consider. Ahem.

But anyway, see, girls? Those Geek Boys that everyone laughed at in school really DO turn out to be great guys. Know why? 'Cuz they know a good thing when they see it, appreciate what they have, and are willing to work really hard at hanging on. In addition, if Michael is any indication, the fact that they looked goofy in their teenage years appears to have very little correlation with how they will look as grown men. None at all. Yup, noooooo correlation whatsoever. For evidence of this, you need only look at the side-by-side photo below. To the left: the dork days. To the right: [insert Hallelujah Chorus here].

The other passion in Michael's life, by the way, is his music. He composes, plays drums, and sings for his band "Hall of Mirrors," who recently released an album on RAM Records. His music has been featured in the movie "Freddy Got Fingered" (probably that film's only redeeming social value) and on TV in an episode of "The Crow -- Stairway to Heaven" in which he also guest starred.

His current project, "The Dead Zone," showing on the USA and SciFi networks, debuted to rave reviews and the highest ratings for any cable show EVER (right about the time ex-Boyfriend Tony Shalhoub's show "Monk" did the same thing (it was a very good summer for cable television, that's for sure!)). Michael's character, John Smith, is a guy you just want to get to know, in every sense of the word. I mean, how can you not find this guy fascinating? He gets in a horrific car wreck and ends up in a coma for six years, only to awaken and find that his mother died, his fiancee got married to the town sheriff and, as if that wasn't enough, he's got a psychic whammy that kicks in whenever he touches another person. It's a lot to take in. And there's just something about the way John Smith carries himself, and his Cassandric burden, that makes a gal wanna reach out and offer whatever help he could possibly need. Even if all he needs is something simple. Like, say, an occasional smooch on the cheek. Though, I suppose it could be a little disconcerting if that gal has anything in her past or future that she doesn't want him to know. But I know I certainly have nothing to hide. So, quick, somebody get me John Smith's numbah!

Anyway, before I get too carried away, let me get back to my point. I highly recommend that you check the show out. If only to see how well the former Farmer Ted turned out (which turns out to be very well indeed). The extra bonus, of course, is that the show is pretty well-written and absorbing fiction. Sunday nights at 10pm on USA. I'll be watchin', Mikey.