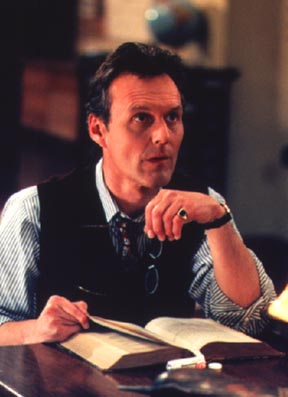 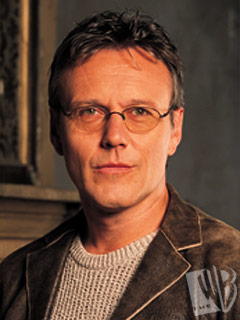 Well, okay, so it's been a long time comin'. But I had my reasons for delaying this final installment of the "Buffy the Vampire Slayer" Boyfriend series (see also Oz, Xander, Spike, and Angel). The main reason was this: I REALLY didn't want to screw this one up. Because this man IS COOL. And if I get one, I say ONE, single word in the wrong place, I'll never forgive myself.

I finally got over this problem when I realized that A: it is very unlikely that Anthony Stewart Head will actually see this and B: even if he ever does, it's not like I REALLY want to pursue a romantic relationship with him. Cheap fling? Sure! But you don't have to come off sounding like the Queen of Witty Prose in order to score a cheap fling with a MAN, after all. Men are easy!

So, here we are, finally, and all the pressure is off. Anthony Stewart Head, of course, is the actor who plays Rupert "Ripper" Giles, Buffy's watcher, mentor, father figure, and, most importantly, her intrepid LIBRARIAN. And I think that with that one word ("librarian," not "intrepid"), I've really managed to say all there really is to know about what makes Giles so impossible to resist. Because what could possibly be sexier than a tall, smart, quiet, shy, cute LIBRARIAN? Just ask my husband -- we rule!

Librarians are cool for a variety of reasons, but the main one, in my humble opinion, is that they don't ever actually pretend that they know everything. Most professionals strut around acting like they wrote The Book on their field. But not librarians. Instead, we just chill out amongst our stacks, looking totally comfortable in our own skins. Why? Because we didn't HAVE to write The Book on anything -- we just have to know where it is, should we ever have a need for it later. My own personal mantra? "I don't know. But I bet I can find out."

That's clearly Giles' mantra too, judging from the size of his own personal collection of reference materials. But, even though Anthony Stewart Head isn't actually Giles OR a librarian in real life, I have this feeling that he's got a lot in common with us MLIS's. I sense the same comfortable intelligence, relatively quiet manner (which is not the same thing as a PASSIVE manner, mind you), and uncanny ability to answer questions. And, what's more, he's got all this AND he looks great in tweed. If he wasn't already an incredibly talented actor, I just know he'd be a librarian. If there's any justice in the world, that is.

But, librarian vibes aside, Tony's got a lot more to offer us all. For one thing, did I mention he's absolutely gorgeous? In fact, let me tell you a little something -- I don't often use the word "handsome" to describe men I see who are really gorgeous. It just doesn't fit. For example, Cary Grant is handsome. But Keanu Reeves is just cute. Sean Connery? Handsome. But Brad Pitt? Merely gorgeous. Anthony Stewart Head, though, is about as handsome as handsome can get. He's got one of those faces that just makes you relax, know what I mean? It doesn't make you get all goofy on the inside, all silly and excitable -- it makes you calm. Like looking at a masterful piece of art. Or reading a novel by Faulkner. Like, ah, nice. Like, deep sigh. Like, mellow sunshiney afternoon. Does this make sense? Or am I just weird?

Handsome. Smart. And did I mention talented? We Americans have really gotten cheated, by the way, when it comes to Anthony Stewart Head exposure. He's been in tons of other productions and shows over there in his homeland, not to mention a veritable feast of theatrical performances. I think England is even getting his latest series, a spin-off of Buffy called "Ripper" before we North American feebs are. And where, I ask you, is the justice in that? No offense to the Brits, but they already HAD their chance with the all the good stuff and they blew it. Time and time again. Because every time something good develops in England, what happens to it? That's right, it gives up on that country and flees to mine. The Beatles? Fled. Hugh Grant? Fled. Heck, we can even get really good Earl Grey over here now. In fact, I dare say the only thing England has left that I still want is Prince William. And I have faith that as soon as he's old enough to take some solo trips to Washington State, he'll immediately see the light, become a librarian, and move into my apartment.

After all, can you name one famous cataloging system that came out of England? Yeah, me neither. Go, Melville Dewey, go!

Oh, stop. I'm just teasing. I mean, obviously this is all coming out now because I'm bitter about the fact we Americans had Tony in our clutches and somehow let him escape back to the Isles. Dag nabbit! But you mates could do me a big favor, if you wouldn't mind -- if you DO get "Ripper" first, make it the biggest hit the BBC has ever seen, okay? That will more than nail our chances for getting it shipped over here for reruns which is all it's going to take to cheer me up on this point. And prevent any further colonial rumblings on my part (long live the Queen!).

Okay, a little biography on Tony: He was born in the summer of his 27th year, comin' home to a place he'd never been before. No, no, wait, that was John Denver, "Rocky Mountain High." Not even British. Sorry, sorry, I'll start over. A little biography on Tony: he was born in the WINTER of 1954 (February 20th, to be exact) in Camden Town, North London, England. He grew up in Hampton, near London, and made his acting debut at age 6 when his mother and some of her friends put together a production of "The Emperor's New Clothes." Tony says that it was his role as the Emperor, and the applause it garnered, that gave him the acting bug. And that ant's been in his pants ever since (my words, not Tony's). (Tony would never say anything quite so ridiculous -- he is a gentleman, sir.)

After graduating from high school, he worked for a year as an assistant editor for his father's documentary production company. He was then accepted at the famous London Academy of Music and Dramatic Arts, where he studied for the next several years. In 1976, he left the Academy to see what he could make of himself. His first major show biz break came quickly with the musical "Godspell," where he performed in Saturday matinees, alternating between three different parts. The practice, and patience, finally paid off a year later when the show was bought for a limited run in the West End and he ended up in the starring role.

Since then, he's been in several television shows in England, including a number of BBC productions. But possibly his most famous role aside from Giles was his part in a series of Taster's Choice commercials that started in England and eventually (fled!) to the United States. You remember these, right? He played a sort of shy fellow with a lopsided smile and a bit of a twinkle in his eyes, who is charmed by a cute chick and later attempts to woo her by serving her instant coffee in china cups? Yes, the ONLY reason those commercials weren't laughed out of the country, despite the fact there isn't a women alive who would actually DRINK that stuff, was because every girl in England and America knew that no female on the planet would ever be able to resist that accent, those eyes, and that sweet, sweet smile, even if it DID come bearing the worst drink ever to be packaged and sold in regular grocery stores. Am I a fan of instant coffee? Don't ask me that. Would I drink watered down shoe polish if Anthony Stewart Head was handing it to me in a china cup? You know that I would. And you know that you would too.

You liar. YOU WOULD TOO. Who do you think you're fooling?

Anyway, in case you've forgotten, "Buffy" wasn't actually Anthony's first American television show. The actual first was a sci-fi series called "VR5" starring Lori Singer and Michael Easton. Yeah, I never saw it either. But there's a reason for that -- it barely lasted a season. Lucky for Anthony (and us), someone had the brains to hand him the script for the pilot episode of "Buffy," which he read in a single sitting at a restaurant one afternoon. When he couldn't stop laughing, despite the frowny glances of other diners, he knew the part was for him. And the show became a huge success all over the world in only a few short years.

The bad news is that Giles left the show last year and is only popping up every now and then from now until the show dies a terrible, premature death (Buffy leaves at the end of this season, and I suspect most fans will leave with her, especially if Dawn becomes the next Slayer -- she makes me insane and I know I'm not alone). But in the meantime, he's hard at work at his spin-off, "Ripper," which I gather will feature Giles back on his home turf (England) doing all kinds of watcher-y type stuff over there. Will it be good? Who cares? All I want is to see my librarian icon back at work in the stacks. And I have to give him back to Her Royal Highness in order to get it, I'll do it.

Favorite song: "Adadio for Strings" by Samuel Barber (but not in the movie "Platoon").

Favorite TV show: "Seven Up" (a documentary in the 80's that followed seven kids and did an update on them every seven years)

Favorite girl: Sarah Fisher, his girlfriend of the last 15 years, with whom he's had two daughters.

There. That's everything you need to know about Anthony Stewart Head. He's cool, he's handsome, and he's my favorite Boyfriend in the world (this week). And if you've managed to get this far along without ever seeing a single episode of "Buffy the Vampire Slayer," there is something very, very wrong with you. FX channel, 6-8pm nightly. Or Tuesday nights on UPN at 8. Hit it!