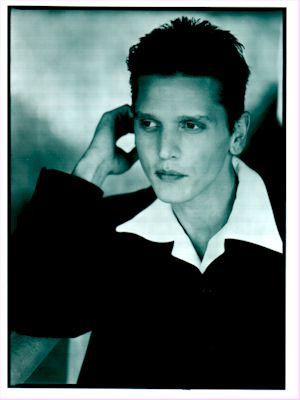 First of all, an annoucement: Rodney Brooks' MacGyver Factor Score has been raised to 99.999999%, an infinitesimally small step away from absolute perfection. Click here to find out why!

Now, let's get into this week's Boy. If you haven't been to any movies this year, you probably won't recognize Barry Pepper. Prior to this year, he'd been in a couple of very obscure movies and had a few guest shots on television. I sure didn't recognize him from anything the first time I saw him, but he definitely made a mighty fine impression on me. That film was Saving Private Ryan, and while I have a very unpopular opinion about it, I will say one good thing: it was chock-full of some extremely attractive young men.

Which has pretty much been my experience with the military anyway.

Barry played the bible-quoting sharpshooter Private Jackson. He's actually one of the least developed characters in the movie, but that didn't bother me one bit, which I think has something to do with the fact that whenever the camera was on him, it was hard for me to concentrate on anything but his absolutely spectacular nose. It's got the same cute little flair on it that Judd Nelson's nose had (which is what helped get Judd to Boyfriend status as well). I'm not sure what my Thing for flaired noses is all about, but instead of analyzing it, let's just run with it.

The second time I saw Barry Pepper (not counting my second screening of Private Ryan, which was a big mistake anyway) was in the action-packed Enemy of the State, starring future Boyfriends Will Smith and Gene Hackman. Unfortunately, he's got a pretty small role. In fact, even though he's in a lot of scenes, I'm not sure he had any speaking parts. Which is unfortunate because he's got a nice voice (which, coincidentally, emerges from a spot just under his wonderful nose). Anyway, it was a nice surprise seeing him again and after I was done watching (by the way, I think the NSA is after ME now -- my cash card wouldn't work in ANY ATM machines yesterday!!), I went to the IMDB to see if he was in anything else. The bad news is, he's not really in anything before Private Ryan. The good news is, he's going to be in two more movies coming out fairly soon. One is the movie based on the Stephen King serial novel "The Green Mile," which could be really really good as long as King stays away from the whole project. The other is something with John Travolta and I don't know anything about it.

Now, the absolute BEST part about Barry Pepper is this: he's Canadian! This means that at any time he could easily change careers and become a Mountie. The bad news is that he's married, though his wife looks like a pretty sweet lady. Besides, I kind of like the married ones -- it says a lot about their character.

Anyway, I think everybody should see "Saving Private Ryan" at least once. I'm not even going to tell you what I really think about it, though, because I just can't handle the controversy my opinion keeps stirring up. It IS full of cute guys who can really act, though, so even if you end up with an opinion like mine, you'll still come away with SOMETHING. And keep an eye open for Barry in films coming soon -- I suspect he's got a good career ahead of him. And the nose knows.

MacGyver Factor Score: 98.6%. He's getting a high score for a couple of reasons: first, because he's writing a screenplay and that's cool; and second, because he called the creator of the biggest Barry Pepper fan site (click here) on her birthday and then sent her a letter to put on her site for all the fans to see. You know what? That's just a really really nice thing to do. Good job, Barry!