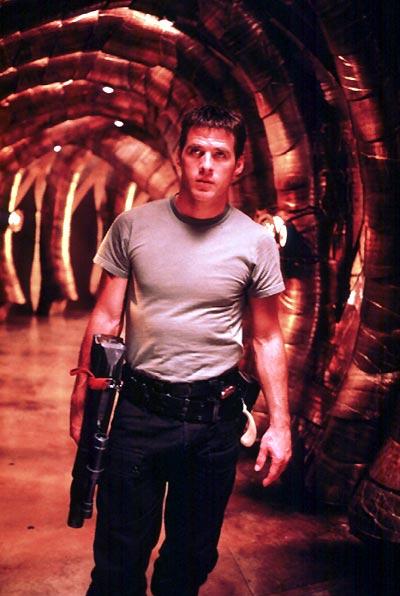 This week's Boyfriend is someone I'd never even heard of until about 10 days ago. I had gone down to Salem with my brother to hang out with our parents for the weekend and Friday night, my brother talked us into watching a television show on the SciFi channel called "Farscape." I'd heard of it, but had never watched it. And had seen enough bad SciFi channel programming to know I ought to be wary. But boy was I wrong! It's fantastic! Great aliens! Great plot! And great-looking lead actor, Ben Browder!

Ben plays John Crichton, an Earth guy who accidentally flew his spaceship into a wormhole and ended up in an unknown (to him, anyway) other part of universe. As if that weren't bad enough, the first thing he did when he popped out of the wormhole was plow into another spaceship, accidentally killing the pilot. As if THAT weren't bad enough, the pilot who died was the brother of a really mean dude who then became extremely angry with Crichton.

Somehow (and I've only seen two episodes so I don't know exactly what's happened), Crichton ends up on a ship with a bunch of escaped prisoners. Not just any old ship, though -- a ship that is actually a living entity itself. And the escaped prisoners are pretty weird too. But the coolest part about the prisoners he's teamed up with is that they don't, for the most part, look at all human (in fact, one of them is a plant, though not of the green, leafy variety), which is where I always thought Star Trek kind of goofed; it doesn't actually make any sense that aliens would be bipeds who looked just like us except with weird skin or weird bumps on their heads. So, points for creativity and special effects (by the way, Farscape's creatures are made by the Jim Henson people -- just like Yoda!).

Also on the prison ship is a woman who was ousted by her own people, people I will collectively refer to as "The Bad Guys" because I can't remember what they are really called. She was a Bad Guy once herself, but spent too much time with these prisoners and was considered "tainted" by the exposure and kicked out. So, instead of beating them, she's joined them. She's human-looking, by the way, and therefore an obvious major plot-point involves the phrase "sexual tension." I can't decide where I want that to go, though, having just seen the episode of "Moonlighting" where everything goes to hell because David and Maddie jump into the sack together. But I'll withhold deciding until I see an official kissing scene.

Anyway, enough about the plot and stuff. Let's talk about Ben. He's cute, don't you think? And he's also funny (this is the only show I have ever seen where a character drops a reference to Monty Python -- in one scene, they are about to take Crichton to the torture chair again and he mutters something about "the comfy chair" -- I almost fell outta my seat when I heard that). The writers are obviously about my age and no strangers to the cool parts of popular culture. Excellent!

Something about Ben reminds me a little of Cary Elwes, though I have yet to find anybody who agrees with me. I spent the whole two hours I was watching him last week thinking, "Who does that guy look like?" and then an hour after I went to bed, the phrase, "Rodents of Unusual Size? I don't think they exist," wafted through my head and I sat up and shouted "Wesley!" (talk about references to cool popular culture. . .). I think it's the eyes and mouth. My brother thinks I've lost my mind. But I swear -- I am right! Just watch the show and tell me you don't agree!

By the way, I did a little research on Ben to see what else he's done. The weird news is that he used to be Julia's boyfriend on "Party of Five." I have NO recollection of this, even though I think it must've been before I quit watching, since Farscape's been on for a year and that's about how long it's been since I declared I was giving up on the Salingers (long overdue). If anybody reading this remembers him and can think of any plot details that might shake my brain loose, please email me. Otherwise I'm going to have to start watching the reruns again and I just don't know if I have the strength to deal with the whole Justin/Griffin thing again.

Oh hey, wait. Did Ben play the guy Charlie hired to fix the roof? The guy that Julia sort of drools over and then talks into painting her room or something like that? I keep hearing his role described as "Julia's boyfriend," but don't remember them really officially dating each other. You guys will have to let me know.

A little biographical information: Ben was born in Tennessee in about 1962. His family moved to North Carolina a few years later and Ben was mostly raised there. He went to college (forget where, but in NC too) and got a degree in Psychology, which definitely suggests something about his mental state -- I have yet to meet a Psych major who isn't totally nuts. Decided not to pursue Psychology (whew!) and went to theater school in London instead. He's been in a few movies (like "Memphis Belle") and was also in a production of "Merchant of Venice" on Broadway (with Dustin Hoffman). He's married with two kids (shucks) and is currently living in North Carolina and commuting to Australia for the show. And I thought 45 minutes on the bus every morning was a pain in the arse. . .

A little non-biographical information: he's cute and sweet and nice and funny and talented and very very easy on the eyes. I like it when his biceps are bulging and I like it when there are kissing scenes (or even near-kissing scenes). Tune in to "Farscape" on the SciFi channel Fridays at 8pm. You will not be disappointed!

MacGyver Factor Score: 92.1%. Points off for being married. Yes, I respect marriage a lot and am always happy to hear when sweeties are wedded. But when they are NOT wedded, they definitely make better Boyfriends. There's really no arguing with that.

Addendum: I watched the two episodes from this past Friday and they were fabulous too! I'm totally hooked. You are missing the best show on television!! What are you thinking?!