You have reached the home-page of
Meg "Meggie Five Fingers" Wood.
Your call is important to us; please stay on the line. 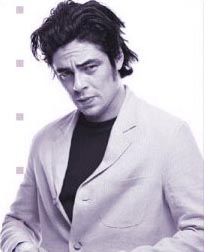 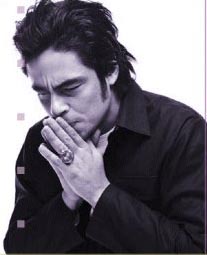 This week's Boyfriend ought to get a couple thousand of you off my backs for awhile. You've been begging, pleading, and crying for me to feature Benicio Del Toro for roughly thirty-six-billion years now (you know, give or take). So, here! Here he is! Take him!

Wait, no, scratch that last part. Just leave him here. For me. Because I love Benicio and you can't have him. For one week, anyway, he belongs to me and me alone. However, because I'm so nice, I'll share. You guys deserve it, after all, just as much as I do. But let's just make sure we all keep in mind who's in charge around here, got it?

As I told most of you who emailed me, I was waiting to feature Benicio until I had a chance to see at least ONE of the three movies he has out in theaters at the moment. And, I got my chance, finally, and saw "Traffic" the weekend before last. I knew "Traffic" was about the war on drugs and I knew Benicio was in it and that he played a cop. But what nobody had bothered to mention to me was that he spoke entirely in Espanol during the movie (there are subtitles, though, so don't worry). Holy cow, compadres, Benicio with his pudgy little "I Ate Too Many of Whatever the Mexican Equivalent to Doughnuts Is" cop-belly was torture enough (I love men with little bellies), throw in a foreign language, and I'm a goner for sure.

Plus, I speak a little Spanish myself (started learning it in grade school and studied it all through junior high and high school). So, it's always nice to listen to it and see how much I can still remember and figure out on my own. Which, unfortunately, is not actually much, as it turns out. That's what happens when you study one romance language for years and then add another one on top of it later (I added French). The two languages become all twisted in your head and pretty soon, you're saying things like, "Hola, amigos! Ca va?"

The natives of either country aren't sure what to do with you then. Though, obviously, the French probably mind it a lot less than the Spanish, since the French had nothing but scorn for you before you even opened your mouth, you stewpid Americain. And anything stupid you do after that is just more fuel for their self-righteous loathing, and therefore, they're probably actually semi-grateful to you for it.

Not that I have anything against the French. Ahem.

Anyway, how'd we get started talking about the Frogs? Oh yeah, Benicio was speaking Spanish in "Traffic." I liked "Traffic," for the most part, though I was a little disappointed in the Michael Douglas Drug-Czar plotline (it's point was made a little too heavy-handedly, though I loved the scene when all the drug war bigwigs were standing around talking about locking up drug users while they sipped at a steady flow of brandy). Before I can really say more about it than that, I'll have to watch it again. It's a pretty complex film and I'm not entirely sure I was following the Benicio plotline carefully enough. Of course, this fact had more to do with than just the complexity. There was also the little tiny fact that the main feature of the Benicio plotline was, in fact, Benicio himself (go figger). And I kept getting kind of distracted, slipping off into daydreamland as Benny nibbled on my ear and whispered, "Yo te amo, mon amour. J'adore tes ojos y tu pelo bonita. . ." (you see what I mean about the problem with the Spench? Or the Frenish? Or whatever the heck I'm talking about?).

I've also recently seen the movie "Snatch," another one of the three Benicio flicks out at the moment. In this one, Benicio has a relatively small part, but one that is well worth the time spent. And, in fact, despite the fact he doesn't last too long, the rest of the movie is such a hoot, I heartily recommend it. It's probably the first and last time, in any case, that you'll get to see Benicio Del Toro all dressed up like an Orthodox Jew. I should also warn a few of you that after seeing this and "Fight Club," my resolve against featuring Brad Pitt is starting to weaken. I'll keep trying to hold it down, but I make no more promises.

But let's go backwards in time a bit now, and I'll tell you all about my past experiences with Benicio. To be honest, it's been only recently that I've discovered Benicio Del Toro is actually an absolute babe. My first two BDT experiences were "The Usual Suspects," a part for which he had shaved his brows and hairline and practiced speaking completely incoherently, and "Fear and Loathing in Las Vegas," a part for which he gained about 45 pounds by, as he says, "eating chairs, tables, buildings, and bridges. But what really pushed the balance was donuts." In neither part could BDT fairly and accurately be described as "pretty." Being hilarious counts for a fair bit in my book, so there was always a little something about Benicio that intrigued me. But something about him as Oscar Zeta Acosta kind of kept the fire from fully igniting.

Since then, though, I've seen him in a heap of other movies, including (unfortunately) his debut movie, "Big Top Pee-Wee" (he played Duke the Dog-Faced Boy). Most of them have been pretty decent movies and where they were only borderline, the presence of Benicio definitely kept them from tumbling over into the abyss. I'm thinking specifically of "Excess Baggage" right now -- a movie in which Benicio plays a sort of reluctant kidnapper and in which he is almost unbearably cute. It is, in fact, that movie that elicited the "hey, that guy's actually kinda cute" reaction from me, at long last (even though I wasn't all that impressed with the movie itself). And after that, everything I've seen Benicio in has made me all goopy on the inside.

A little background on the Boyfriend: he was born on February 19, 1967 in Santurce, PR. When he was 9, his mother died after a lengthy battle against hepatitis. Benicio says his first "role" as an actor was back when he used to spend time with his ailing mother, trying to make her laugh to keep her spirits up. He says he took her death surprisingly well, probably because he was so young when it happened, it just seemed like it was a part of "the tree of life." But he has also said the only movie she ever took him to was "Papillon," and ever since, it's been his favorite movie of all time.

Benicio was a troublemaker in school, probably to call attention to himself. He rebelled against his father as well and this conflict got even worse after his father remarried. Because they could not get along (the new wife, the father, and Benicio), Benny's father allowed him to travel to Pennsylvania to go to a boarding school. He threw himself into sports, the one language both he and his American classmates could communicate in, but it didn't take him long to learn English. He made friends quickly because of his athletic abilities, love for rock and roll, and talent for pulling pranks (a few of which were so cruel he says he has never stopped regretting them).

Despite the fact that Benny's father and godmother very heavily attempted to pressure him into becoming a lawyer, the family tradition, Benicio knew that just wasn't for him. When he was in college, he heard that a student play was taking auditions and decided to try out. Only, it turned out, you couldn't audition unless you were a drama major and/or a senior. As he was only a freshman, he immediately changed majors, tried out, and got the part. Shortly after that, he quit school altogether, moved to New York, and started working on a career as an actor. Then, he ended up in Los Angeles, taking acting classes at Stella Adler and building a theater at the Conservatory to help cover expenses. Two years later, he landed his first part -- a guest role on "Miami Vice."

After a few more television parts, he slowly started to edge his way into film. He did some bad movies ("Christopher Columbus: The Discovery") and some good ones ("The Indian Runner" and "Fearless"), and finally, his persistence was rewarded in 1995, when he landed a role alongside Kevin Spacey in "Swimming with Sharks." The two of them reteamed for "The Usual Suspects" and faster than you could say, "Freddy Fenster," he was famous.

Del Toro now lives in Los Angeles, where he maintains a pretty low profile between movies and hasn't engaged in any serious Hollywood romances (yay!). He's written and directed a short film, which starred a pre-famous Matthew McConaughey, and has said he'd like to do more of that in the future. But first, he's got at least one more movie on its way. This one is called "Basic" and is about a DEA agent investigating the disappearance of a legendary Army ranger drill instructor and several of his cadets after a training exercise goes seriously awry. Be nice to see Benny play a cop again. Hope he keeps the pot belly. Mrrrrrow!

Whoops, I just realized that while I've gone on longer than usual talking about the amazing skills and talents of this week's Boyfriend, I forgot to tell you what REALLY attracted me to him. Man, is that not great hair, or what? Sigh. I could look at that hair all. day. long. And, since there are about 5 or 6 Benicio Del Toro movies I'm ready to see again sometime soon, I should be able to get my wish. In the meantime, make sure you head to the theaters soon and catch at least ONE of the three BDT movies out there at the moment. Pay full price for 'em. The Boy deserves it.
Boyfriend-Related Links