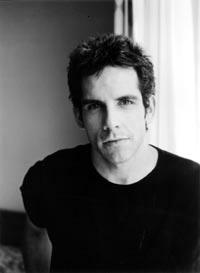 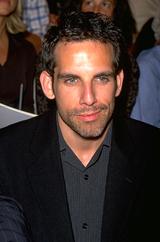 Okay, fans, here he is! *GASP* Can it be true? Is it really him? Yes! Believe your eyes! I finally got around to running Ben Stiller, the Boyfriend I have gotten at least one request for every week for the past 8 months!

See, didn't I tell you I would? And here I have. But it's not like you really had to do any serious arm-twisting; it was only a matter of time. Because I love Ben Stiller! (You suckers! You sent all that bribe money for nothing! Hah!)

Now, for the rest of you who are currently asking, "Why all the hoopla over Ben Stiller?" -- let's get down to it. Ben is one of the funniest comedic actors out there today. And he's not just plain ol' funny, either. He's also crafty, intelligent, and extremely cool. The perfect balance of brains and black humor, and to top it all off, he's also a go-getter. Well, sort of anyway.

See, Ben Stiller used to have this show back in the 80's called "The Ben Stiller Show." As you may or may not remember, it was a huge flop, despite the fact he got an Emmy for his work (writing). Now any ordinary Hollywood brat (both his parents are famous comedic actors themselves) would've started whining and shooting up heroin. Not Ben Stiller, though. He signed himself up for some little movies and waited until he got a little more recognition. Eventually, in the mid-90's, Fox offered to buy and broadcast his show again. Yay! Ben said. He grabbed a couple of new talents (like Andy Dick and Janeane Garofalo) and started to make some new episodes. And what do you think happened to our intrepid hero THIS time around?

Lucky for Ben, though, he had gotten into directing and made a couple of movies that were big hits ("Reality Bites" and "The Cable Guy"). Then he got a couple of acting gigs that amounted to a little MORE recognition ("Flirting with Disaster" and "There's Something About Mary"). And now, today, Ben Stiller is a household name. Well, sorta. It is, at least, for the eighty-six gazillion of you readers who have sent messages that started with "Why haven't you run Ben Stiller yet? What's WRONG with you?"

I have seen several Ben Stiller movies, by the way, including one that I just saw for the first time last night ("Mystery Men" -- he plays Mr. Furious, a superhero whose superpower is throwing temper tantrums on cue). I can honestly say I've liked them all, which is no small compliment. However, one thing has consistently surprised me as I've been surfing around the web reading sites and articles about Ben. That thing is this: nobody ever mentions my favorite Ben Stiller movie! They say, "Ben Stiller, star of X and Y. . ." and X and Y are never "The Zero Effect!" Why is that? Didn't anybody else think that movie was hilarious? It was such a terrific spoof of detectives (especially Nero Wolfe) and the whole detective genre ("There aren't evil guys and innocent guys. It's just... It's just... It's just a bunch of guys!"). Plus, Bill Pullman is a cutie and Benny got to be sarcastic and mad a lot (he was like a mini Mr. Furious). I loved it! In fact, if I wasn't at work right now (um, I mean, on my lunch break), I'd run right out and rent it this very minute!

So, what's the deal, Stiller Fans? Did I miss something? Fill me in.

A quick check of Ben's IMDB page tells me that he is soon to appear in not one, not two, not three, but FOUR major motion pictures. Can't wait. In the meantime, I'll have to go back and rent some of the ones he did that I missed (I heard "Permanent Midnight" was pretty good). The rest of you need to go rent "The Zero Effect" and watch it until you love it. I don't care if that means you have to watch it so many times you can play it backwards in your heads. (Hey, that could eventually come in handy -- you might even thank me for it some day!) When you're done, go back to your little "Unofficial Ben Stiller Fan Site" web pages and substitute it for either X or Y (or X + Y). Until then, I do not want to hear ONE WORD from you! Not one!

MacGyver Factor Score: 99.3%. Hey, any ex-boyfriend of Janeane's can be a boyfriend of mine ANYTIME. Ben's IMDB page.