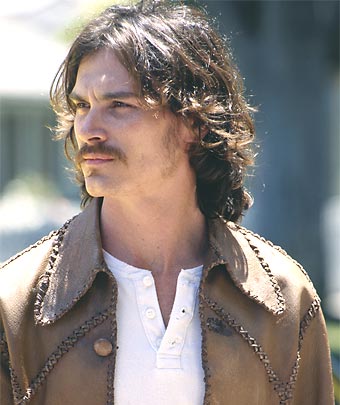 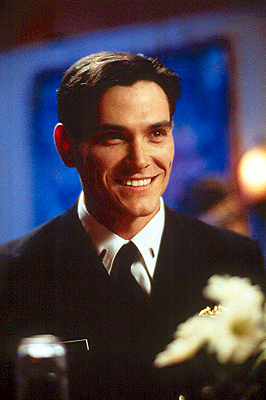 This week's Boyfriend is of my favorite variety -- the newly discovered. Until about a month ago, when people wrote to me and requested Billy Crudup I didn't have a clue who they were talking about. The name was familiar, yeah, but no face was attached. And then I rented "Almost Famous," took one look at his character Russell, and the crazy mixed-up love affair began [insert swooping crescendo here].

Actually, the weird thing is, that's a lie. I watched that entire movie without looking twice at Russell. It wasn't until the last scene that I really noticed him. I mean, noticed him in that special way. Was it the scene itself? His character's act of kindness? The shirt he had on? I don't know. The only thing I'm sure of is this: that totally cute dimple in his chin did not hurt matters one bit.

I love chin dimples. I think I even love them more than I love crinkly eyes and crooked smiles. In my family, a dimpled chin is referred to as a "butt chin," but that seems all wrong on Billy Crudup. Though it's not like he is afraid of crudeness -- some of his best roles have been of characters who were very much not strangers to crudeness. And that's what I love about Billy Crudup. He plays the good, the bad, AND the ugly -- sometimes all three at the same time! Now, that's acting! But anyway, as I was saying, Billy's chin dimple is different. It's no ordinary butt chin. It's an extraordinary butt chin!

Before I get too carried away on the dimple, though, allow me to get back on track. Okay, so, after I saw "Almost Famous," my affections for Billy were ignited. I quickly remembered that I had seen a preview for a movie called "Waking the Dead" that had looked good and knew Billy was in it because a fan had written to me recently about him and recommended the film as part of her plea. So, a few weekends ago, I went out and rented it. Talk about turnaround -- Billy goes from playing a drug-doin' rock star in "AF" to playing a wanna-be politician in "WD"! Craziness! And I loved "Waking the Dead" -- it's a beautiful movie about two lovers who are totally wrong for each other. When the female half of the couple, a political activist, is killed, the male half (Billy) is devastated. But he's finally free to pursue his dreams of becoming a senator without having to worry about what his girlfriend will say at the next bigwig political function. Ten years later, though, just as his first big election race is coming to climax, he starts seeing her places. He even gets phone calls from her. The confusion caused by this is double-fold -- first of all, what is he seeing? A ghost? Or was her death faked for political reasons (it had, after all, sparked a controversy that increased awareness of the struggles of the Chilean people)? Second of all, why is she back (either in ghost or human form)? Is it because she heard he was running for office and has come back to tell him not to sell out in that way?

Anyway, it's a lot better than I just made it sound. And Billy is amazing. You can actually feel him struggling with this -- feel his heart being twisted every time he sees her. Feel his agony over his attempts to paddle through the whirlpool of emotions churning all around him. It's wonderful. And as soon as it was over, it made me want to rush right out and rent "Almost Famous" again. Just because the dichotomy between the two movies was so immense, I honestly couldn't believe Billy Crudup was in both of them.

(Oops, I forgot to say that I also really, really loved "Almost Famous," a film which contains hands-down one of the best lines from a movie ever: "The only real currency in this bankrupt world is what you say to someone else when you're uncool." p.s. Y'all can expect to see Philip Seymour Hoffman show up on this page sometime in the near future as well.)

Anyway, since I'm planning a wedding, I can't afford to rent the same movie twice. I mean, honestly. What a waste of dough. So, instead, I rented "Jesus' Son," a movie based on a book I really loved when I read it about 5 years ago. And here we go again -- from rock star to politician to a combination -- a smart junkie trying to put his life back together after addiction takes his lover from him. While I was disappointed by the movie (solely because I had so loved the book), I'm happy to admit that Billy was again absolutely phenomenal in it.

Acting talents aside, there's more to this man than his job. I mentioned, for example, his wonderful chin. But did I also mention his totally cute, broad smile? What about his eyebrows? His cheekbones? And, woo baby, that voice. I loooooove that voice. After doing a lot of reading about Billy on the web, I can also attest to the fact that off-screen, he shares many of the endearing qualities some of his characters had. He's smart, funny, and honest. And tall. And cute. And all that jazz.

In short, there is nothing not to love. And I love it when that happens.

A little biography on Billy Crudup: he was born on July 8, 1968 (Happy birthday, Billy!) in Manhasset, New York. He has two brothers, Thomas and Brooks. He also has two parents, Mom and Dad. Billy got his start in acting when he was in second grade, playing Uncle Sam in a "Fourth of July spectacular." He says of the event, "I just wore a mask and said the Pledge of Allegiance. But I dug that everybody was looking at me. . .There was an ease with which performing in front of people came to me, and also an excitement. When it came time to pick a profession, I didn't know what else to do."

So, he went off to the University of North Carolina at Chapel Hill and then transferred to the Tisch School of the Arts at NYU. A week after graduating (with an MFA in acting), he won the role of Eddie in the movie "Grind." He had already been in three other movies by this point, "Sleepers," "Everyone Says I Love You," and "Inventing the Abbotts," but it was really his role as the secretive car racer Eddie that got filmmakers to sit up and pay attention. His performance was a mesmerizing mix of boyish charm and sly, sudden, intense silences. A year later, Billy was cast as the lead in "Without Limits," a movie produced by Tom Cruise and directed by Robert Towne ("Chinatown"). His role as the famous runner Steve "Pre" Prefontaine truly decided Billy's future in Hollywood. He could pretty much play anybody, even someone so drastically different from himself (as you may or may not know, Pre was a notoriously "difficult" athlete who challenged the system while shamelessly promoting himself in order to become a star. Billy's take on stardom is radically different -- he says "I just feel that there are other priorities in my life that I find more interesting. So, to embrace that aspect of it is to neglect other parts of what I think is really interesting about acting.").

Okay, sure, so just about EVERY star says he really isn't interested in being a star. But it's hard not to believe someone like Billy. It's the chin, I swear to god. Nobody with a chin that great could tell a lie to sweet, wonderful moi. Nobody.

The bad news is, Billy Crudup isn't actually available. For dating me, I mean. He's been sweethearts with Mary Louise Parker since 1996. And he's totally smitten with her, as near as I can tell. (Can't blame him for that, either. I'm smitten with her myself.) Still, that's okay. Truly. I don't mind. Because the good news is, he's also got two new movies coming out this year -- two more chances for us to spend some quality time with him. The first is called "Charlotte Gray" and is about a young Scottish woman (played by Cate Blanchett) who joins the French Resistance during WWII to rescue her Royal Air Force boyfriend (Billy) who is lost in France. The second movie, "World Traveler," is about a man who "hits the road" and encounters characters that make him realize the importance of his family. It's written and directed by Bart Freundlich who also wrote and directed "The Myth of Fingerprints," another movie I really liked (starring ex-Boyfriend Noah Wyle).

Two movies, two hours apiece, that's four more hours this year of serious big-screen Billy Crudup drooling. Can't wait. And in the meantime, there are a few more of this movies I'm in the line for at the video store. If you have any favorites from his list that I haven't mentioned yet, be sure to let me know. In the meantime, make sure you catch "Waking the Dead" and "Almost Famous," if you haven't already. Pay close attention to that chin dimple. You'll see immediately what I mean when I say, "hubba hubba."