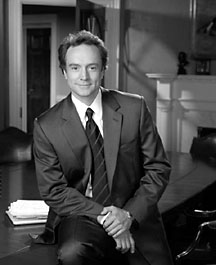 The thing is, the first week of January, NBC reran the two-part "West Wing" episode that came after Bradley Whitford's character Josh Lyman gets shot. And, right before they ran these two eppys, they ran a present-day one in which Josh is forced to confront his post-traumatic stress disorder. That was the episode, actually, that alerted me to the fact he'd been shot at all -- if you'll remember, I only started watching "The West Wing" a couple of months ago, so I never got the skinny on the shooting. I only got the buzz.

Now, put these three (brilliant) episodes together and what you get is Meg falling head-over-heels in love with Josh Lyman, AKA Bradley Whitford. Why? Because (and I've actually felt this way since I started watching it, these three eppys just strengthened it) when I see Josh Lyman come on the screen, I have this overwhelming urge to protect him. He's so sweet -- even his face is sweet -- and so totally screwed up. Know what I mean?

Incidentally, I feel the same way about Robert Downey Jr., though for entirely different reasons.

After the prez (see Bartlet's write-up), Josh is my favorite character on the show. He is, to me, one of the most emotionally interesting characters, one of the most realistic and, well, certainly one of the cutest. I mean, just look at him! Receding hairlines are so sweet, first of all, because they just seem so underdoggy. But, now take a peek below that hairline -- look at Brad's eyes. They just scream intelligent, funny, and kind, don't they? And I believe the dimples kind of speak for themselves ("I am adorable!" is what I believe they are saying to me right now).

So, back to my original train of thought (choo choo!), when the second of the two parter finally finished, I was crying my eyes out on the couch telling my cat Lucky that Bradley was going to have to be made a Boyfriend ASAP. It was obvious to me that the guy needed a little boost after all that trauma, and here I am -- right in the perfect position to help him! But then that nasty inner voice kicked in. "But what about Hugh Jackman?! The girls are expecting an Aussie and there's just noooooo way you can fool them into believing Bradley Whitford was born in Sydney. Besides, just three days ago you were crying on the couch swearing your undying love and loyalty to Hugh. Getta grip, wouldja?" So I was stuck. I'll admit this to you, though, I started work on this write-up the moment I was done with Hugh's. That's the confession -- I'm not even waiting a week to dump and rehitch anymore. Boyfriends are now lucky if they get a full 24 hours of my steady attention! I feel kind of badly about that and hereby do solemnly swear to do better next time. I mean, it's one thing to date 'em and dump 'em after only 7 days. But this feels more like adultery. I haven't even officially given Hugh the boot yet and here I am drooling and weeping over Another Man!

The problem is, "The West Wing" is such an amazing show that it's virtually impossible for me not to love every single character on it (I even have a girl-crush on CJ) and every time I see it, I'm totally mesmerized by one or another of them. I can honestly say that "The West Wing" is the only show I've ever seen that has consistently brought the word "brilliant" to mind. Now, I've just spent five minutes trying to come up with a better adjective than that, since I've already used the word "brilliant" in this write-up and don't want to overdo it so much that it starts to sound false, but that's really the word, people. The show is so well-written and complex that it just blows my mind every week. I have yet to see a weak episode, which, to be honest, I can't say about either of my two all-time favorites, MacGyver and Due South. And though "The West Wing" consistently scores below another of my favorites, ER (can you say "Goran Visnjic"? Me neither -- but isn't he cute?), in the ratings each week, I wouldn't hesitate for a second if asked which one I thought was the better show. (Incidentally, that's actually not true -- it looks like West Wing actually does do better in the ratings than ER (who knew?). But that "Goran Visnjic" bit up there is pretty funny and I can't think of another way to get it in, so I'm just leaving the whole untruthful passage. For the sake of comedy.)

In case you aren't a watcher (and remember, you are still under my shazam spell from last week, so I expect you to start tuning in regularly now), Josh Lyman is the assistant to the prez who pretty much won him the election. He's kind of intense and his personality also inspires the adjective "difficult," but he's also got that little glimmer in his eye that makes all the crankiness worth it. And that smile, whew! It knocks me over (figuratively). Josh's character is also one of the more sarcastic and witty ones on the show. I love wit. Wit is my middle name, as a matter of fact. Put a cute face over a witty mind behind a receding hairline and a charming set of dimples and you have just won my affections for life. That's how easy I truly am. He's not Canadian and he doesn't have a foreign accent, but I'm finding him pretty hard to resist nonetheless.

Now, the problem with Bradley Whitford is that while he's got a degree in acting from Julliard and has been in a bazillion theater productions, it wasn't until "The West Wing" that anybody really started to pay attention. And even then, the vast majority of young women (usually the ones who make all the fan sites, based on my experience) are far too taken with Rob Lowe to notice how cute and charming his co-star is. Hey, it's okay, I understand. And you can expect Rob to show up here at some point too (basically, as I said earlier, you can expect the entire cast). But this has made it pretty hard for me to dredge up anything interesting to tell you (aside from this: man, he is so cute).

I can tell you a few things, though. He was born on October 10th, 1959 and is the youngest of five (you see? the baby of the family is always the cutest and funniest. it's the only way we can get attention!). His mom says Brad was a "ham" from about age 3 on. And in about sixth grade, he transmogrified from "ham" to "actor" when he starred in an anti-smoking skit at school. His co-star was his dog Dory, and even though Bradley says, "The dog was brilliant. He upstaged me a bit," I have a hard time believing that's true. A sixth grade Bradley Whitford must've been almost unbearably cute. I don't see how a dog could take anything away from that.

Bradley graduated from Madison East High School in Wisconsin in 1977 and studied english and theater at Wesleyan University. He then went on to Julliard to get a Master's in theater, for all the good it's done him (sorry, but it's true). He was married in 1992 to actress Jane Kaczmarek (the mom on the show "Malcolm in the Middle") and has two kids (a son and a daughter, ages one and three respectively).

Bradley has done a ton of theater, including the Broadway production of "A Few Good Men," and he's also had a bazillion guest spots on TV shows like "ER," "The X-Files," and "NYPD Blue." He's been in a few movies as well, most notably "The Muse" and least notably "Bicentenial Man." You might've seen him pop up in a few smaller parts as well (like in "Scent of a Woman," "Red Corner" (which was actually pretty good), and "Presumed Innocent").

But that's all I know, folks. Nothing about his hobbies, likes and dislikes, favorite books, role models, family life, etc. None of the truly important stuff either (like his phone number). There just aren't enough gossipy web sites up about this guy! Y'all are falling WAY down on the job out there!

The good news is, once this write-up debuts, he'll suddenly be the most famous man in America, so we have half a chance of finding out some personal goodies about him in the future. In the meantime, you'll just have to tune into "The West Wing" every Wednesday night at 9pm and allow yourself to be mesmerized by Josh Lyman's charms. And/or his twisted sense of humor.