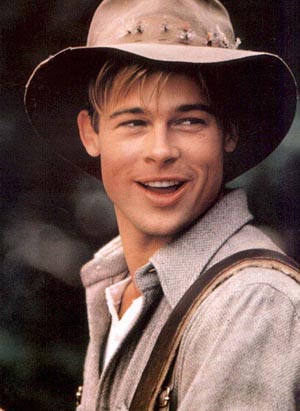 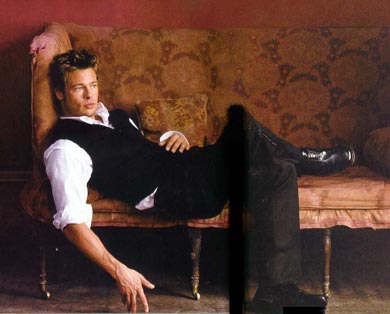 Oh man, I have this feeling that at least half of my readers are at this very moment swearing they'll never read my stupid site again. But, yes, it's true. Hell has frozen over, pigs have flown, I have eaten my shoe. And Brad Pitt has become a Boyfriend of the Week.

It's disgusting and horrible and losery and everything, I know. It's worse than Keanu Reeves (though, I must remind you, not nearly as bad as Leonardo DiCaprio -- I still have SOME shame). It's BRAD PITT, people. That icky ultra-popular and excessively adored guy from "Thelma & Louise." That totally gorgeous in a completely standard and unoriginal way actor guy who married the equally completely standard and unoriginal gal from "Friends" (that show I never watch). Oh my god, has it truly come to this? Have I gone down THIS FAR?

But, the thing is, I recently saw Brad in the movie "Snatch" and he was just so amazingly great in that movie. And, in the past year or so, I've also seen him in "Fight Club," which was terrific, and reseen him in some old favorites, "Seven," "A River Runs Through It," and "Twelve Monkeys." I've also seen him in "Legends of the Fall" this year, but let's not talk about that horrible dog from heck.

Brad Pitt is, much to my considerable surprise, turning out to be one talented dude. He can play anything from a hick cowboy who gives hickeys to a complete madman to a somewhat-misguided gypsy sucked into a whole heap of trouble by a group of Brits and their squeeky-toy-eating dog. The more I think about his growth in film, the more I am truly impressed by his skills as an actor.

Holy freakin' holiness. Can you believe I just said that? No, wait, it gets even worse. Oh my HELL is that guy sexy. He's got a mop of hair (love the messy look) and those incredible eyes, and let's not even get started with talk about his biceps, back, chest, etc. etc. etc. I've now seen Brad Pitt with his shirt off roughly as many times as I've seen a Tom Hanks movie get nominated for an Oscar (it seems like a lot, anyway), and it never fails to impress me. And "impress" is the gentle, couth word for what it actually does to me when it shows up on-screen.

Oh, Jennifer Aniston. I never thought the day would EVER come that I'd hear myself say this: I envy you!

No, no, this is horrible. Horrible, I tell you! I'm disgusted with myself! It's so trite to be in love with Brad Pitt! So completely cliche! So boring! Ack! This site has sunk into the seventh circle this week, people. I'm more ashamed than you will ever know. In fact, so ashamed that I'm not even going to bother checking fan sites or the IMDB or anything like that for information. You want to know about Brad Pitt's life, you go find out. I'm afraid I'm too busy stitching up a nice uncomfy hairshirt for me to wear for the rest of the week. And then there's that bed of nails I'll need to put together.

Please forgive me for I know not what I do. And don't give up on me just because I have sunk so low. I promise to make it up to you next week by featuring someone relatively obscure and not featured on the covers of Vanity Fair, Tiger Beat, or GQ.

Because I don't hate myself badly enough to truly let you down, I will still give you one link this week so you can do your own Brad investigation. The best one I found (though I tried to spend as little time looking in case someone saw me reading Brad Pitt sites -- the shame! Oh, the humiliation!) was:
The 100% Brad Pitt site.