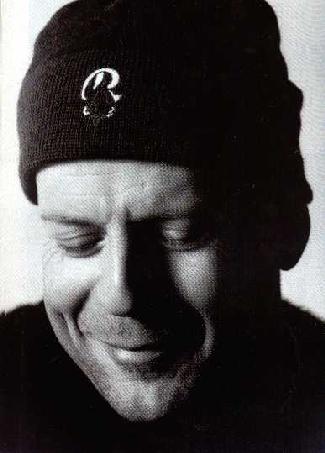 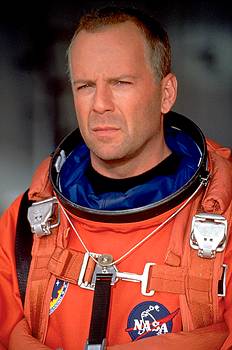 Okay, okay, I'm pretty sure at least 65% of you are freaking out right now. I mean, next to Leonardo DiCaprio, who would be the last person you'd expect to see featured on this web page. Exactly! Bruce Willis! And yet, horror of horrors, look what I've gone and done. You trusted me, you put your faith in me, and I've gone and betrayed you.

Hey, I'm just as aghast about the whole thing as you are. I sure can't explain what's happening here. No wait, yes I can. And, as a matter of fact, I can explain it with one 7-word sentence:

'Nuff said. Because you've all forgotten, see? You've forgotten that before Bruce Willis was in "Mercury Rising" and "Hudson Hawk," he was David Addison! And David Addison was great!

I've been taping all the episodes (shown at 9am, 4pm, and 11pm here on the West Coast) for my mom, but watching them myself when I get home from work everyday. And it's been great! I always loved that show -- it's got great characters (really, for me, David Addison is actually just tied for first with Miss DiPesto) and terrifically funny chase scenes. Oh, the chase scenes. They are the best. Remember the one with the lady in the black veil? The scene where everybody is disguised as her and the carpet is all soapy and they're running after each other and then whooooooosh? Plus, everything that comes out of David's mouth makes me chuckle and I've always liked Cybill Shepherd too. So, how can you lose?

Well, okay, you can lose when you get to the last season. You remember -- the season when Maddie and David sleep together and she gets pregnant and doesn't know who the father is. Lord a'Mighty, we will not be watching those episodes EVER AGAIN.

In the meantime, though, if you ask me if I love Bruce Willis, I won't be able to resist answering with a corny expression on my face and a very loud "Do bears bear?! Do bees be?!"

But I can't honestly say the only reason I'm putting Bruce up here is because of Moonlighting. I'm also a big fan of the first "Die Hard" movie and "Pulp Fiction." I liked "Twelve Monkeys," "The Fifth Element," and "The Sixth Sense," too. (Hey, wait, notice anything similar about those titles?) Now, there are a few Bruce Willis movies I rue the day I ever stumbled across ("Mercury Rising" -- great balls of fire!), but on the whole, I gotta admit I kind of like him. He's got a great sense of humor and a pretty cute grin to go with it. And, of course, he's single, though he does have three kids, all who have names that seem particularly cruel (Rumer, Scout, and Tallulah -- Rumer makes me think of "rumen," which is the first part of a cow's stomach. You know, the part that makes it spit back up its food for a second pass through the choppers? Scout is a name taken from a book I adore, but the use of it for naming one's own kid kind of annoys me -- much in the same way I am annoyed whenever somebody tells me their favorite book is "The Catcher in the Rye." If you need more explanation on this one, email me. As for Tallulah -- well, actually, I kind of like Tallulah, because it's the name of the singer in that Scott Baio kid movie about the splurge guns, "Bugsy Malone." But I will admit that I am pretty grateful I'm not named Tallulah myself.)

Well, crud. Now I've lost my train of thought (choo choo!). Oh wait, yes, Bruce Willis is single -- everybody knows he and Demi broke up awhile ago, right? But what I'm saying is, he's not really someone I would want to actually get too involved with. I could see us as pals, though. I'm not bad with the one-liners myself.

Have I explained Bruce Willis' presence on this page to everybody's satisfaction? Want to hear something else about him? Did you know he got into acting when he discovered his stutter went away if he was speaking on stage? See, so, he may be a huge star right now, but he USED to be an underdog. In fact, I'd say that having a stutter would be even harder on a kid than being named Tallulah, and that's saying quite a bit, my friends.

MacGyver Factor Score: 85.4%. Lots of points off just so your faith in me is restored a bit. Yes, I am aware of the fact he's an action hero. I saw "Armageddon" too, you know. But a long, long time ago, he was in a television show that is currently bringing me a lot of joy. If you've seen the "Taming of the Shrew" episode, you'll understand just what I mean.