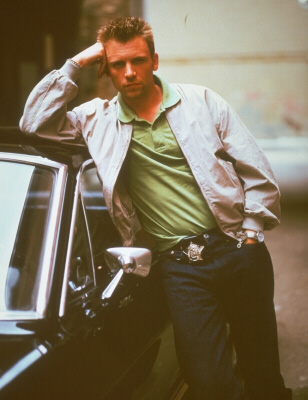 Yeah, yeah, whatever. So I said "fortnightly" and it ended up taking a whole month for me to get here. So, sue me, whydoncha? I neglected you and I'm sorry, okay? But, look, I just spent the last two weeks on narcotics for pain and I wanted to wait to tell you all about Callum Keith Rennie until I was sober enough to be able to speak eloquently again.

So let me start by stating the obvious: CKR is a BABE. (When I say "eloquence," I don't really mean it the way you might think.) I'm sure, however, that most of you have absolutely NO idea who the heck he is. So read on and I'll get to it.

Begin by examining that photograph. Man, I love that car. In fact, it was just in an episode of Due South, I believe, which is no coincidence since that's the show Callum co-stars on with ex-boyfriend Paul Gross (AKA Constable Fraser). CKR plays Chicago cop Ray Vecchio; bad cop to Fraser's good cop, I guess, though, really, they're both the good guys. By the way, why aren't you people watching this show? What is wrong with you? Would you LOOK at this man? He's gorgeous! Why else watch television if not to drool incessantly over fictitious heroes you will never ever get to smooch? THAT'S entertainment!

In fact, the whole Ray story is an excellent example of its smart quirkiness. I'm not going to detail the story here, because if you don't watch, it won't make sense to you, but suffice it to say that Callum is not the first Ray Vecchio. He's not just a new castmember playing the old role either. Nor is he playing a new character who just happens to have the same name as the old character. In fact, his character's real name is Stanley Kowalski. If you're intrigued, email me and I'll fill you in or even loan you the episode during which the whole weird mess is finally explained to Fraser. It's a classic episode. Ca-lassic.

It actually took me awhile to like the new Ray. But now I think I like him even better than the old Ray. This Ray has real heart, folks. He even cried in one episode because he fell in love with a girl and it just didn't work out. It was a touching moment for me, possibly because it meant I still have a chance, but also because men who can cry on television are obviously REAL men, not macho show-pigs like, say, Tommy Lee Jones. Oh wait, I like those kinds of men too.

Well, anyway, you know what I mean. This Ray is cool, smart, funny, charming (in a Chicago cop kinda way), and REAL (in a completely fictious-character kinda way). I just love him to death. Not as much as I love Fraser, maybe. But pretty darn close. MacGyver Factor Score: 98.9999%. Close to Fraser's score, you'll notice, but losing one point for not being able to tell how long it's been since the bad guy walked across a particular street merely by licking the pavement. MacGyver had a pocket knife; Fraser's got taste buds. Callum Keith Rennie just has a really cool car.

I was going to say "cute butt" instead, but my mom's reading.