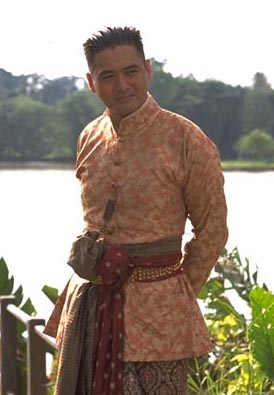 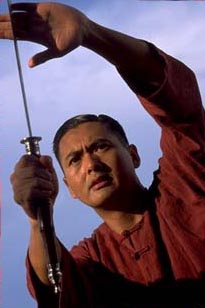 This week's Boyfriend will probably interest many of you. After all, it's been a good solid year or two since I last featured an Asian Boyfriend. Not to mention one who is globally known as a guy who can no-kidding kick your butt.

But Chow Yun-Fat has recently made the Hong-Kong/Hollywood transition, so even if you aren't a big fan of "Ying Hsiung Pen Se," you can still catch a couple of really good flicks at your local video store. And if you haven't, you ought to. Why? Four words: "Cuz Chow Yun-Fat Rules!"

As a matter of fact, I "met" Chow Yun-Fat right about the time I met Jackie Chan, my other Asian-Boyfriend-Who-Rules. There was a year or two in my life where I hung out with a lot of people who liked to watch Hong Kong cop movies, and Chow and Jackie were two guys who showed up a lot. I didn't take a lot of notice of Chow in those days, though, because he was in the really serious and often pretty violent movies (although one web site I was reading said he's actually well-known in Hong Kong for doing comedies)(believe it or not). Jackie was blindingly fun -- I have never seen a Jackie Chan movie I didn't absolutely love! Even the lamest Jackie Chan movie makes me hysterical with laughter and glee.

However, I didn't put Chow Yun-Fat up here to talk about Jackie Chan. And, before I get started, let me clear up a little confusion you may be feeling: Chow is Yun-Fat's last name. But I'm using it here to refer to him because think saying "Chow" is a lot more fun than saying "Yun-Fat" (not to mention it conserves syllables). So, first name is Yun-Fat. Last name is Chow. Boyfriend name is "My Sweetie, Chow."

If you've never seen a Chow Yun-Fat movie, and you aren't a big fan of subtitles, you're in luck! Because the director Chow Yun-Fat is most often associated with in Hong Kong is John Woo. Why does that make you lucky? Because John Woo has ALSO made the Hong Kong/Hollywood transition. And in "The Replacement Killers," the two of them teamed up together again for a good old-fashioned shoot-'em-up (what John Woo is famous for -- lots of guns and bullet wounds).

"The Replacement Killers," which I just saw last weekend, is about a guy who is a hit man. But it's against his will. He owes some pretty bad dudes and is having to repay them by shooting the people they want dead. If he doesn't do it, they'll kill his family. Chow is this hit man, and boy, when Chow Yun-Fat comes at you with a gun, you better run. He never misses, mostly because he shoots about 35,000 bullets at you. The odds of missing are greatly reduced when you are spitting out bullets faster than kids can spit out brussels sprouts. Anyway, the last hit Chow is told to carry out is one he just can't bring himself to do. So, he tries to get a forged passport so he can flee to China and scoop up his family before the bad guys notice he's skipped town. Only while he's hooking up with the forger, played by Mira Sorvino, the bad guys find him there and the shootin' match begins. The shootin' match pretty much continues on from there until the end of the movie, actually. Was this a good movie? Eh, not really (brave the subtitles and rent "Hard Boiled" instead). Was I entertained? You bet!

Now, if you truly want to experience Chow Yun-Fat, most people will argue that you've GOT to see him in the shoot 'em ups. It's what he's known for. It's what he's done the most of. These people think "Chow Yun-Fat" and it immediately brings the co-phrase "John Woo" with it. I disagree, however. In fact, if I had it my way, I would erase my memory of all those old John Woo movies (not that they were bad movies -- they weren't) and replace them with one single movie memory: that of "Anna and the King." [Insert silly girlish sigh here.]

When "Anna" came out, I remember being pretty curious about it. For one thing, it looked like the cinematography was going to be breathtaking. And for another, I was curious about the selection of Chow to play the role I had only seen Yul Brenner in. And I love Yul Brenner, though even as a child I was confused about why he was the King of Siam even though he was quite obviously not of Asian heritage. Chow was a big step in the right direction. At least he looked the part, right? But I had heard that the new version of the King was not the same as the Yul Brenner one. He was apparently going to be a little softer around the edges. And a lot more complex emotionally.

Hence the confusion. Chow Yun-Fat is an old softie? I'll believe it when I see it!

And that's exactly what I did. I saw it and from minute one, I totally believed it. Chow was an absolutely wonderful king. He carried with him just the right amount of regal haughtiness and human tenderness. The complexity fueled by his affection and respect of Anna was so much more meaningful and interesting in the new version. Instead of Anna just traipsing around complaining about how things are done and occasionally breaking into corny song, Anna was thoughtful. Twisted by the realities she saw around her. Unsure how best to respond to certain situations. And, best of all, Anna was Jodie Foster. And she never sang a single note.

A prime example of the complexity I'm talking about was the scene in which the King is made aware of the fact Tuptin (the woman who was torn from her peasant lover and given to the King by her family to serve as a concubine) runs away from the palace to try to rejoin her true love. In Siam, the punishment for this kind of "traitorous" action is death. But, when Anna hears Tuptin is about to be executed for this, she is horrified. She dashes into the King's chambers and demands that he stop this horror from taking place.

The King's reaction truly brought home the fact that this movie was about a hundred levels deeper that the old musical. Instead of just yelling "NO!" and making Anna flatten out on the floor to keep her head below his (while he struts around saying "Et cetera, et cetera, et cetera"), the King is suddenly in anguish. He had been trying to figure out how he could intervene to stop the execution himself -- an act he was sure he could do and still appear to be in charge and intolerant of such behavior -- he was now forced to let it go on as planned. Why? Because now that Anna had make a fuss, there was no way for him to stop the execution without appearing to be a weak man. And that he could not do. Not because of pride, but because he knew that perception could lead to a series of events that would destroy his country.

This truth torments him -- we see him as Tuptin is being executed praying like crazy and we can tell from his face that it's killing him to let this continue. But because of the politics of the time, he is simply unable to do anything to stop it without risking the stability of his reign.

Okay! Spoiler is over!

Argh! You see what I mean? There was nothing like that in the musical. And for good reason, too. It really wasn't the musical's goal to portray the story as realistically as possible (hence Yul Brenner, I imagine). The musical simply wanted to entertain, with possibly a teeny little anti-enslavement morality lesson tucked away inside somewhere. But take away the songs, go back to the truth, and then get Chow Yun-Fat and Jodie Foster at the helm, and you've got one heck of a movie.

Now, I am already aware that many many many people will not agree with me on this. "Anna and the King" didn't get terrific reviews (can't remember why, don't care either). But go ahead! Disagree with me! See if I care! It's not going to change the fact that "Anna and the King" is what made me fall in love with Chow Yun-Fat. All the bullets and brussels sprouts in the world couldn't do what that dance scene did for me!

A little biographical information on Our Sweetie Chow: Chow Yun-Fat was born in Lamma, a small island off of Hong Kong, on May 18, 1955. When Chow was 10, he and his family packed up their stuff and moved to Hong Kong, where Chow spent most of his formative years. Formative is truly the right word, too, as it was there that he discovered the two things he says most influenced him: the Cantonese Opera and American movies.

When Chow was 18, he landed his first role as an actor. Was it in a cop film? Did it involve lots of gunfights and gore? Was John Woo involved? Answer to all: nope. It was, and you'll never believe this, a SOAP OPERA. Yep, Chow answered a newspaper ad that announced a search for young actors. He interviewed and auditioned and was quickly accepted and enrolled in the tv station's training program. Soon after, he hit the soaps. In fact, one web site I read said he was in multiple soap operas, and even has some photos, which were absolutely hilarious (see "God of Actors" web site link, below).

Chow also made a few movies in those early years, though they had titles like "Massage Girls," and weren't, uh, huge critical successes. The first movie he did that got him some recognition was a film called "The Story of Woo Viet." It came out in 1981 and was quickly followed by a series of bombs and a few personal problems that kept Chow from hitting stardom. It wasn't until 1986, when he made his first John Woo movie ("A Better Tomorrow") that people really started to sit up and take notice of Our Sweetie Chow. But, as proven from the test of time, the Chow-Woo combination is a good one. Chow is a believable gangster/cop/etc. and John Woo is a good storyteller. Put them together and what have you got? Bippity-boppity boo.

Chow's next movie is coming from critically acclaimed ex-Boyfriend Ang Lee. It's call "Crouching Tiger, Hidden Dragon" and is about a magical jade sword that disappears, spurring a quest for the missing treasure. It's being described as a really beautifully filmed epic and has gotten great reviews ever since it played at the Toronto Film Festival.

Never fear, though. After this arty movie, Chow's going right back to John Woo for "King's Ransom," which is supposedly about two thief brothers caught in a love triangle. John Woo has also said it's going to be an homage to "The Thomas Crowne Affair," but I'm assuming he doesn't mean the Pierce Brosnan version. Anyway, Chow Yun Fat will play one of the brothers and the object of the brothers' affections will be played by. . ME!