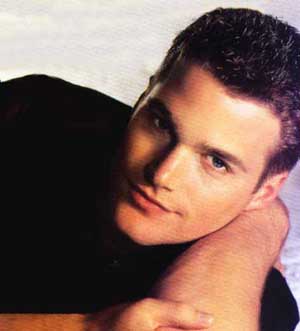 This week's Boyfriend comes as the direct result of his latest movie, not as the direct result of years and years of pining away for him, followed by a wake-up call from a reader. A nice change of pace, since that's how the last few Boys have come about, right? Not that I haven't always thought Chris O'Donnell was a supreme cutie-pie, but I probably wouldn't have thought to make him a Boyfriend if I hadn't just spent two nail-biting hours watching him look totally gorgeous digging around in the snow on the set of "Vertical Limit," which just recently hit the video stores and ought to even more recently hit your rental list.

I should say up front, though, that "Vertical Limit" is by no sense of the term a "film." It is, indeed, one of the most wholly unbelievable movies I've ever seen (and I've seen a LOT of these kinds of movies). But just because everything that could go wrong did, is no reason to slam the flick. I still loved every totally unrealistic, suspenseful moment of it -- and a great part of that enjoyment stemmed directly from the charm exuded in mass, intoxicating quantities by Mr. Chris O'Donnell. Now, Chris O'Donnell is kind of an old teenaged heart-throb, though to me that phrase usually conjures up images of pre-teens, not real teens, and Chris was a guy I thought was super-cute when I was in high school (even though I was far too cool to admit that to anyone). It was then, after all, that I first saw him in "Men Don't Leave" (his first feature film), "Fried Green Tomatoes," and "Scent of a Woman." When I hit college, I pretty much stopped going to movies (too poor!), so my flame for Chris kind of sputtered out. When I finally got back into watching movies, I managed to sort of accidentally stumble across some of his mid-to-late 1990's ones and was charmed all over again. In specific, I'm referring to "Circle of Friends," a movie in which he plays a supremely adorable Irish lad who falls in love with Minnie Driver, playing a slightly overweight and totally low-self-esteemed cutie herself. That he fell so hard for a girl who didn't live up to Hollywood's typical standards of beauty was very inspiring to me (a la Bridget Jones, I suppose). Even though shortly after the film, Minnie lost all her curves and turned herself into just another skinny actress in the crowd (a la Kate Winslet, much to my great dismay on both their accounts). That's neither here nor there, however, so let's just pretend I didn't say it at all.

About that time, Chris also showed up as D'Artagnan in "The Three Musketeers," another role to swoon over (not to mention one in a movie that also starred two ex-Boyfriends, Kiefer Sutherland and Oliver Platt). Yet for some reason, despite all this, I do have to admit that while I thought Chris was cute, I didn't really have a crush on him to the same degree I did on some of the other Boyfriends I've featured.

I think the problem is that Chris always plays Mr. Niceypants. Not that I mind that he's a sweetheart, but jeez, does the boy have a dark side at all? He's even married to a kindergarten teacher! "Vertical Limit" is, of course, no exception to this rule, as he plays a brother who risks everything to save his sister's life. And nice guys are great. Truly. But without a little emotional contrast, they can get to be pretty dull at times. I'm telling you this for a good reason, by the way -- I'm not trying to say that this write-up is only being created half-heartedly. I AM totally in crush with Chris O'Donnell. I'm just being honest with you guys about one teeny little problem I have with him. It's like this: if he always holds the door open for me, when will I ever get a chance to check out his butt? That's kind of the logic I'm working with here, follow?

Oh, just ignore me. You guys must've noticed that I've been a little more busy than usual the last few weeks. I can't be expected to function at top speed now, either. You'll have to give me another week or so before I'm better at hiding my TRUE feelings the way a nice young woman ought to. Ahem.

Anyway, a little background on our supremely sweet and charming Boy this week: Chris O'Donnell (nee Christopher Eugene O'Donnell) was born on June 27, 1970 in Winnetka, Illinois. He grew up in a conservative Catholic family and thus, as one fan site says, "does not smoke, has never been arrested, and never dated a supermodel." Happily, Chris says he doesn't go to hookers either, because they "ain't [his] cup of tea" (did you guys ask him that or did he just volunteer the information one day? Sheesh!).

Chris's acting career began with commercials, like the one in the 80's which featured him selling MacD's hamburgers to Michael Jordan (an ad I actually remember, though I never connected the faces until I read about this on a fan site). At age 17, he made his first feature film, "Men Don't Leave," in which he played the 14 year-old son of Jessica Lange, as well as the object of Joan Cusack's grown-up seductions. The role seemed to establish him as a master of "wholesome" parts, a stereotype he hasn't been able to shake since, much to my previously stated dismay. Chris worked pretty steadily in film over the next few years, but it wasn't until he starred opposite Al Pacino in "Scent of a Woman," that the critics really sat up and noticed.

Probably Chris's most famous role was that of Robin to ex-Boyfriend Val Kilmer's Batman in 1995's "Batman Forever," a role he reprised in 1997 with "Batman & Robin." Yet despite Chris's critical kudos, cute face, and talent for playing sweetie-pies, I am rather surprised to note that he hasn't really made that many movies. After a career spanning about 12 years, Chris has made a mere 16 movies, something that's pretty unusual for an actor of his teen heart-throb caliber. Again, I suspect this has something to do with his niceness problem, but it's early Monday morning and I'm still working on my first two shots of espresso for the day, so I'm not going to bother delving into the issue now. Suffice it to say, while I'm not entirely convinced that Chris could play a villain, as his Girlfriend this week, it's my job to point out that it might enliven his career somewhat. "Vertical Limit" will do that too, to some extent (because who doesn't like seeing totally gorgeous fellas risking their lives to save their sisters?), but not in the same way a good old fashioned Bad Guy would.

Before we go, here's a little trivia about Chris: he's 5' 9" tall (my height, which is maybe a slight problem for our relationship, since I generally like taller guys better than shorter ones -- but he can wear lifts in his shoes or something; that'll be fine). He attended Loyola Academy in Chicago, went to UCLA for a few years, and then finally graduated from Boston College in 1995 with a BA in marketing (kind of ironic, given the fact here we all are, talking about how badly he's been marketing himself over the years). In 1996, he was chosen by People Magazine as one of the 50 most beautiful people in the world (for obvious reasons, namely his smile, eyes, hair, and upper-body strength). His favorite movie, true to character, is "It's a Wonderful Life" (groan). Wait, wait, it gets even worse -- his favorite hobby is COLLECTING BASEBALL CARDS. Could the boy get ANY more all-American Boy Scout-like? What's next? He likes to spend his free time rescuing puppies and helping little old ladies cross the street?? Okay, okay, I have to stop now. And remind myself (and you) that nice guys don't always have to finish last. Nice is good. Nice is. . .nice. And also, at least this week, nice is Chris O'Donnell, which also means nice is totally and incredibly adorable. Also, there's hope for us -- I notice that his next movie, "29 Palms" is coming out soon and in the IMDB listing for it, Chris's role is described as "The Hitman." Never met a hitman who was a sweetheart. Well, except for "The Professional," but there were extenuating circumstances involved there, so it doesn't really count, right? So, let's all take a deep breath (take a step forward, take a step back, and then we'll cha-cha!) (sorry) -- things may finally be coming around. We'll get Chris in a bad-guy role and suddenly all our hesitations will fall away. I may have to feature him as a Boyfriend again if that happens, since I realized just now that this write-up is the only one I can think of during which I spend 95% of the time telling you what's WRONG with Chris O'Donnell instead of what's right with him.

I'm turning into one of those girlfriends who constantly puts down her sweetheart in an attempt to change him. He's from Mars and I'm from Planet Destructive Criticism. Yeesh. It's no wonder they only stick around for a week or two, you know? What kind of partner am I? Just ignore me, ladies. It's been a long few weeks for me lately -- I'm not myself. And I humbly apologize both to Chris and to you. Come back next week for a much more supportive forum. Promise.