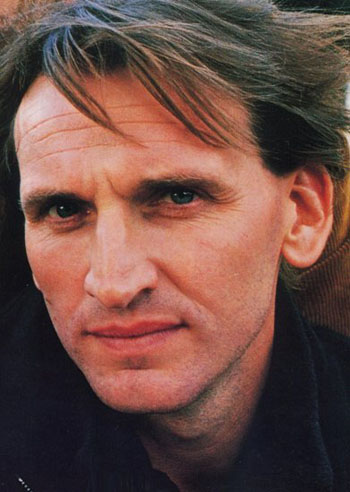 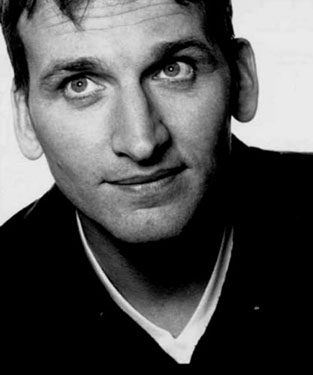 If you are a fan of this week's Boyfriend, you have only one person to thank for his debut here, and that person, oddly enough, is not me. It's another fine reader, like you, who, unlike you, recently brought my attention to Mr. Christopher Eccleston when she recommended that I watch the movie "Jude."

Now, if you know who Christopher Eccleston is and you are also a regular reader of this site, then you must also be aware of the fact that I have known Christopher myself for at least 2 years. You are aware of this because I've already raved about one of his old tv shows, "Cracker," which starred ex-Boyfriend Robbie Coltrane. Yet, I have to admit to you [insert image of me hanging head in shame] that while I was very fond of Chris's character in "Cracker" (he played DCI Bilborough, if you'll remember), I really didn't take much notice of him in the series until it was too late (without giving anything much away, those of you who have seen the whole series know just what I mean when I say "too late" -- and while I'm here, I might as well add this, "I CAN'T BELIEVE THEY DID THAT!"). I suppose I was too busy noticing Robbie Coltrane's character, Fitz, that hunka hunka burnin' sarcasm and cynicism, and somehow, lord knows what happened, but Christopher's crinkly smile and amazing bone structure totally passed me by.

I hate it when that happens. In fact, I hate it so much that I've had to reserve the whole "Cracker" series at the library just so I can rewatch them all now and pay more attention to Christopher's character. Otherwise, I'll never be able to rest about this. The guilt, you guys. You wouldn't believe the guilt! So, if you need me over the course of the next week or two, you'll know where to find me -- smack dab in front of my pitiful 13" television screen, alternately drooling over Chris and cursing myself for being so dang obtuse.

But enough about me.

The reader who sent me the message suggesting the movie has a fantastic web page herself that you'll all have to check out (you can start with her own Eccleston page, which is linked below (see the Cozzi Fan Tutti link)). I love getting reader e-mail that is full of suggestions for things I should watch or read and I usually take it pretty seriously (though I'm sure many of you think I'm lying about this since I keep promising to rent, say, "Valmont," and when you check to see if I've done it, I always say, "Not yet." But I'm not lying. I'm just pathetic. So sue me.). Anyway, since last weekend was a rainy one, dreary and cold, I thought it was probably a pretty good weekend for a movie based on a Thomas Hardy novel (dreary and cold, you see?).

"Jude" is based on Hardy's novel "Jude the Obscure," which I'm sure many of us read when we were in high school (or earlier, if you're like me and went through a 14 year-old girl "tragic romantic literature" phase -- I still get weepy when I think about "Jane Eyre," for example). But, when you're 14, I realized as I was watching "Jude," certain things really impact you more than others. I remembered "Jude" as being a romance of the most tragic nature (even worse than unrequited love, which is really a singular problem, the romantic tragedy in "Jude" involves both halves of the couple equally horribly). I completely forgot that it's a movie that people who have kids or want kids probably ought to think twice about seeing.

However, I have to admit that despite my horror at suddenly remembering the parts I'd previously forgotten, "Jude" is one of the best movies I've seen in quite awhile. It's simply gorgeous from head to toe (and here I refer not only to the film itself, but to its entire cast as well). Beautifully edited, costumed, and cast. I can't remember how I pictured Jude when I was a kid reading the book, but I'm sure it was as someone who looked an awful lot like Christopher Eccleston (and not like, say, River Phoenix or Johnny Depp, who were the men I most often pictured as the romantic leads in books I read while I was a pre-teen).

Anyway, if you've never seen "Jude" and you're up for a downer (?), it's definitely worth your while. Wait for a rainy, sad kind of day, though. That's my advice.

Of course, getting us back on track, I'll say again, this movie made me fall completely in love with Christopher Eccleston. And, of course, now that I love him, I realize I've seen him in all kinds of things. Things I've even seen more than once, like "Existenz," though I never really noticed him in them. So, it's a dang good thing you people are paying attention out there. Otherwise, all the good ones would be getting away. Well, maybe not ALL of them. I do still get to gloat over "discovering" Heath Ledger before he really hit the big leagues. (Though I also have to admit he's not turning out to be as great as I once predicted. But that's a story for another time.)

I'd be willing to bet my (nonexistent, metaphorical) fortune on the fact that many of you are looking at the pictures of Christopher Eccleston up there and thinking "But he's so dorky-looking!" Philistines! Dorks rule! Yes, Christopher Eccleston trims his bangs too short. But it just adds to the overall geek thing that I love so well. Plus, when you have cheek and chin bones like that, you can get away with quite a bit in the hair department. Add to that a terrific voice (avec accent!) and one of those oddly attractive string-bean bodies, and what you end up with is . . .well, Christopher Eccleston. But you know what I mean, right?

A little background: Christopher was born on February 16, 1964 in Salford, England. While in school, he was an avid runner and football player, but at age 19, he decided to give acting a try. He enrolled in the Central School of Speech and Drama and by age 25 was making his professional debut in "A Streetcar Named Desire." Not long after, he became a regular figure in British television, showing up in shows such as "Our Friends in the North" and, my favorite, "Cracker."

In 1994, he made the film "Shallow Grave," which first brought him to my attention. I vividly remember Eccleston in that movie, though I didn't really take much note of him at the time, because I still have nightmares about most of the scenes from that incredibly gruesome and terrifying film. If I never see it again as long as I live, it'll be too soon. Oy veh. In fact, let's quit talking about it.

"Jude" came out not too long after "Shallow Grave," but, of course, I missed it. Instead, my next Eccleston experiences were with "Elizabeth," "Existenz," and "Gone in Sixty Seconds." All fine movies, but I only actually took note of Eccleston's presence after I'd already fallen in love with him. So, if you're among the bazillions who think Christopher looks familiar but aren't really all that convinced he's a babe, then I think your problem is the same as the one I had about three weeks ago. You still haven't seen "Jude." It's a hard movie to recommend, to be honest, because as I said earlier, it's a brutal tragedy. But if you really want to know why he's the Boyfriend this week, you're just going to have to swallow your hesitations and hit the video store. That's all there is to it.

Unless, and here's where the gamble comes in, some of Eccleston's future projects turn out to be as great. Any minute now, he should be showing up in six new things -- no small feat. The first is a drama/love-story called "The Invisible Circus," which will also star Cameron Diaz (and which has gotten pretty wretched reviews on the IMDB, by the way). The second is "The Darkness," a sci-fi thriller with Nicole Kidman about a mother who hides her two kids in a mansion because they've got some kind of disease that reacts with sunlight. Definitely sounds like my kind of movie (i.e. bad in all the best ways). The third is "Strumpet," and is directed by Danny Boyle, the director of "Shallow Grave" and "Trainspotting." Going to have to see previews before hitting that one, just in case it too is going to give me the shivers for three hours afterwards. Then there are three that I know nothing about: "Bloody Sunday Project," "I Am Dina" (a TV movie, it looks like, with Gerard Depardieu) and the suspiciously familiar-sounding "Dina, I Am," also featuring Gerard Depardieu. Don't ask me, I'm just the messenger.

Do you really want to gamble on that list? I'm not sure I would. But, you can if you want. You might save yourselves an hour of sobbing uncontrollably (the effect of "Jude"), but then again, what if that means you never fall in love with Christopher Eccleston? Don't you want to be part of the elite group of American women who get all giddy when he smooches Kate Winslet for the first time? We're a tight-knit bunch, you know. Me and the three others. Plus, for all you ladies who have recently emailed me about Liam Cunningham, you have the added bonus of getting to see him play an incredibly sexy, if not somewhat charmingly oblivious, teacher.

He's tall. He's bony. He's gangly. He's goofy looking. He's pale. He's sort of a dweeb. He's not very well-known. He's Christopher Eccleston. And I loves 'im. Do with this information what you will.