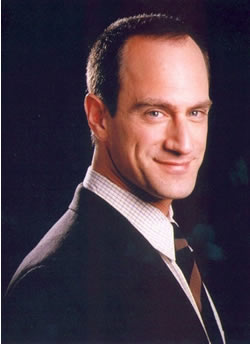 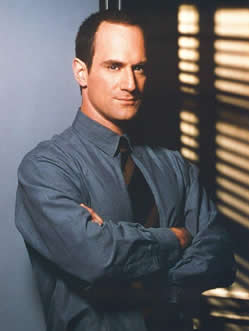 A couple of years ago, when the first-ever spin-off of my then-favorite (let's go, hyphens, let's go!) TV show, "Law & Order" was announced, I was thrilled. More cops! More lawyers! More stories "ripped from the headlines"! More ethical dilemmas! More "bump bump!" after the introductory schpiel! I was in heaven, mostly because back in those days, I didn't have cable and therefore wasn't aware of the fact Law & Order reruns approximately 32,000 times a day (pick a channel, any channel). I wanted more! More, more, more!

So, you can only imagine my disappointment when the pilot episode of "Law & Order: Special Victims Unit" ended up sucking. I should've known from the moment that lamely remodeled theme song started up that things were not going to go well. That song always makes me think of the old Victor Borge sketch wherein Borge sits down at the piano, cracks his knuckles, and begins to play a song that sounds vaguely familiar, but at the same time absolutely and completely wrong. After running through a bar or two, he stops, takes a steady look at the sheet music, and then picks it up, turns it upside down and begins to correctly play the William Tell Overture. Great sketch. Bad revision of the Law & Order theme. I can't explain just why, but that song just irritates the hoo-hah out of me, a feeling I generally reserve for encounters with Jennifer Tilly, though that's neither here nor there.

But that was only the first sign. Next up was Mariska Hargitay, fresh off her role as Anthony Edwards' annoying girlfriend on ER. I was still rolling my eyes in her general direction when she showed up on SVU, and when it started to seem like she was going to cry in every. single. episode, I just couldn't take it. Plus, I found her teeth extremely distracting for some reason. I dunno. I just didn't like her and that's all there was to it.

Anyway, after watching only about 3 episodes that first season, I quickly wrote the show off as one of the worst dramas ever to cross my NBC path. The only good point that I could see was the presence of three actors I really liked: Richard Belzer (not really Boyfriend material, but I totally love that guy), Ice-T (though I'm not sure if he was actually on during that first season -- was he? Anyway, he rules), and this week's Boyfriend, the ultra-hunky Christopher Meloni.

Now, at the time, I didn't actually know who Christopher Meloni was. All I knew was that I was instantly attracted to him. But since we really had no history together as of yet, his presence alone wasn't enough to hold my interest in the show. I quit watching, and that then and there was it for us and his stinker of a show.

Until now, of course. But we'll come back to that in a moment.

A year or two passed between the SVU Fiasco (which I almost wrote as the "SUV Fiasco," but that's a whole other story), and I'd pretty much forgotten all about Meloni when he suddenly popped up on my radar again. This time, he was playing a character about as far away from Detective Elliot Stabler as a man could get. The show was called "Oz" and it was a prison drama originally airing on HBO that I was watching on DVD. In it, Christopher plays a gay convict who has an extremely mean mean-streak. He seduces and then betrays one of the other characters on the show, ultimately causing that man to have a complete mental breakdown. But while Christopher made a startlingly realistic bastard, pardon my French, there was still something about him that totally sucked me in. And after a few episodes of Meloni on Oz, I was officially hooked.

Which is why, about a year ago, I decided to suck it up and give SVU another try. I started to tape the episodes whenever I saw them popping up on USA or NBC and watching one or two of them a week. And almost immediately, I was eating my words. The show seemed to have grown so much since I'd first seen it -- the characters had finally transformed into real personalities and had relationships that seemed authentic and complex. The plots which had originally struck me as "sex and violence" shock plots to appeal to our nation's love of boobs and guns had instead evolved into thoughtful mysteries that had the same quality I so love of the stories on the original L&O show -- the outcomes are not always good and not always bad. And sometimes, you can't figure out which outcome would be which anyway, because the ethics involved become so complex. I love a show that challenges my opinions on things -- that opens me up to a new way of thinking about justice and the difference between right and wrong. And SVU had finally gotten to the point where it was starting to do just that.

Plus, having had some distance from Mariska, when I came back to her, I found her totally appealing. She's tough, yet cute. And, like me, she always wears a white tee-shirt underneath her solid-colored outer layers. In fact, if you pay attention, you'll notice that's about how's she's dressed in every single episode. White tee-shirt. Solid-colored top layer. Short hair. Winning smile. Well, heck, people! We're practically the same person! (Except her legs are better than mine. Which is okay because my boobs are better than hers. It all works out.)

And then, of course, there's Detective Elliot Stabler, also known as "This Week's Hottie-As-The-Kids-Would-Say Boyfriend." The more I watched him, the more totally in crush I became. There are times on the show when he is so tender, it's almost hard to watch. I confess I sometimes find myself wishing I could be a victim just so I could score that hug he hands out to the crying, distraught types. You know that hug? Man, if I could have that hug once, just once, I would die a happy girl. (Not that I'll die an unhappy girl if I don't get the hug, of course. That'll only happen if the Mariners don't win the World Series this year.)

As if that weren't enough, he's also got a wonderful voice, a terrific smile, and some of the best biceps ever to grace a primetime cop drama. Lord A'Mighty, the man has an upper body to die for (happily or unhappily, depending on the pennant). Yessiree, that man can arrest me ANY TIME HE WANTS. Book me, Dano!

But, lest you all start to believe Christopher Meloni's talents are limited to NBC spin-offs and HBO prison dramas, I'd like to quickly inform you that he's done a fair number of films as well. I've seen several of the ones in which he's had a non-starring role ("Twelve Monkeys," "Fear and Loathing in Las Vegas," "Junior," etc.) and also recently rented two he starred in. The first was "Murder in Greenwich," a nonfiction television movie based on a book by Mark Fuhrman (yes, THAT Mark Fuhrman) about Fuhrman's attempt to solve the decades-old murder of Martha Moxley, a rich kid killed in Connecticut in the 1970's. I found Meloni's portrayal of Fuhrman very interesting, actually. It was very balanced. Fuhrman's infamous behavior is not ignored, but it's not harped on or apologized for, either. I neither liked nor disliked him -- I simply found him intriguing. And the story itself here was also pretty engrossing as well. While I could've done without the perma-smile on the actress who was playing Martha-From-Beyond, the rest of the acting was so well done I really got lost in the storyline. And Meloni, of course, is damn handsome, especially when he gets all het up about a mystery.

The other movie I rented, solely because of the presence of Janeane Garofalo, was the god-awful comedy "Wet Hot American Summer." Billed as a sort of spoof of bad summer camp movies, it's light on intelligent lampooning and heavy on just plain stupid. Meloni is really the only bright point, and that's mostly because he's the only one who seemed to be having a good time with his character. Ya'll should skip this one. And if you see a copy lying around somewhere, ya'll should light it on fire. Pronto. Before it can escape.

Luckily, even the occasional dog doesn't seem to be hindering Meloni's career. But let's start back at the beginning. Christopher was born on April 2, 1961 in Washington, D.C. He first became interested in acting when he was in college at the University of Colorado in Boulder. After graduating (with a degree in history), though, he took a job in construction back in DC He toiled in that miserable city (no offense to D.C.ites, but I hate your town) until a friend of his pressured him to quit settling and get back to what he felt passionate about -- acting (would that we all had best friends who encouraged us to do the same). Meloni took his pal's advice, quit his job, and moved to New York, where he apprenticed at the Neighborhood Playhouse and got his first big break as the lead in the NBC comedy "The Fanelli Boys."

After a series of tough-guy roles on TV (including guest spots on "NYPD Blue" and "Homicide: Life on the Street"), Meloni nabbed his current part as Elliot Stabler, a role that has brought him a lot of critical and popular success. The show was renewed for another season this summer, and is also in syndication on the USA Network. While there aren't any upcoming films for Meloni, and his show "Oz" is over on HBO (I believe -- could be wrong about that), we'll definitely be seeing plenty of him Friday nights at 10pm on NBC. Which is, really, all a girl like me could want. Well, that and a guest-spot as Stabler's new girlfriend on the show. . .Ooh, and don't forget that whole World Series thing. The End.