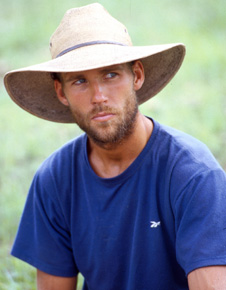 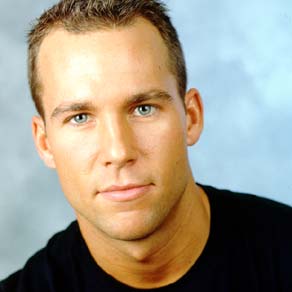 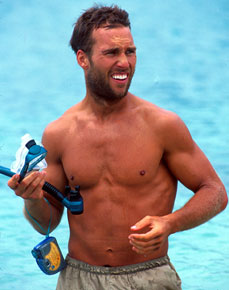 I had someone else planned as this week's Boyfriend, but, as happens from time to time, that write-up has been preempted by one even more timely. One that I didn't even realize was coming until it was practically the last minute. One directly related to recent events on television. More specifically, recent events on CBS. And, unless you live under a rock somewhere, you probably have figured out right now that this is going to be another one of those annoying "Survivor" things. Cuz, folks, this week, the Boyfriend is none other than the first runner-up from the Outback, Colby Donaldson.

If you'd told me about 3 weeks ago that I was going to make Colby a Boyfriend, I wouldn't given you a look that said quite clearly, "Yeah, right. Him or Leonardo, wink wink." Or, if I was feeling less playful and more cranky, a look that said even more clearly, "That'll be the freakin' day!" But, as sometimes happens, it's hard to predict matters of the heart. And though I have thought for awhile now that Colby might not be the arrogant jerk he seemed to be, I didn't really know it for sure unless last Thursday, the final episode of the Outback Survivor. So, the seed has been there, dormant, for a month or longer now. Happily, unlike most real seeds I plant (my thumb has nary a greenish hue), this one actually sprouted. And how.

If you missed the episode (ha ha ha, as if), I'll tell you whyfor the change o' heart. A few weeks ago, Colby had announced to the cameras that his only allegiance in the game was to teammate Tina. And that if he was going to end up being one of the last two players, he wanted to make sure he ended up there sitting next to someone he'd be just as happy to see win in his place. A lot of my friends said Colby was a lying, selfish jerk who didn't mean a word of that. But I had my doubts -- after all, all the other manipulative (or "strategic," depending on how to view the game) things he'd said or done, he'd said or done directly to other players. He reserved the truth for the camera alone (like, telling Jerri he'd keep her around and then telling the camera, heh, THAT would be the day. . .). So, why lie about things there now? No reason. Still, I had my doubts. Would Colby really hold on to that sentiment when he was actually faced with the choice? If he'd tossed Tina off and ended up going up against the jury with only Keith, he would've won the million dollars for sure.

And because that is true, many people have of late been calling Colby stupid (or nicer/meaner versions of that). He had the million dollars and he gave it away. It was a "bad" move or a "miscalculation" or even just an act of complete insanity. But to me, it's what told me what Colby is really like -- he's good. He's a good man. We suspected this when his mother made him cry on national television, right? But what better way to know it for sure than to see him knowingly vote off Keith so that he could be happy about the outcome, no matter what it turned out to be? I mean, whadda guy! I am such a sucker for niceness. Truly. It gets me every time.

Now, if you don't agree with me on this, that's A-OK by me. Go ahead and e-mail me and tell me so. I'll listen (or, at the very least, I'll nod occasionally and say "uh huh" a lot). But you won't change my position on it. Colby is not stupid. He did not make a mistake when he voted Keith off. It was completely calculated, decided well in advance, and acted upon out of sheer goodness. Colby, in short, is one supreme sweetheart.

And if that alone doesn't convince you that Mr. Donaldson deserves to wear the Boyfriend Crown this week, then I urge you to look at the photos above and check out how incredibly blue those eyes are and yee-gods, how incredibly white those teeth are. If he makes one commercial after his stint on Survivor, let it be an ad for a whitening toothpaste. I mean, would those teeth not inspire YOU to brush? They practically twinkle, they're so clean. If they ever do a remake of "The Great Race," they'll have to get Colby to play "The Great Leslie." *gleam*  He's charming, he's sweet, he's good, and BOY is he cute! It just doesn't get much better than that.

Now it's time for a little background: Colby was born in Christoval, Texas on April 1, 1974. He currently lives in Dallas, but I'm trying not to hold that against him. He graduated from Texas Tech University with a degree in business marketing and began working as a sales rep before deciding to ditch the corporate life and try to start his own company, so he could work in a field that he really felt passionate about: custom auto design. Pretty risky, but luckily, it seems to have worked out pretty well for him (and that $100,000 sure is gonna help out). Have to admire the man for his guts, don't you think? I wish I had the confidence and nerve to do things like that in my own life. Though, I guess I do get points for getting married, right?

Anyway, as you may have guessed, based on some of the shots of him with no shirt on (of which, happily, there are many), Colby is in real life, as well as on Survivor, a very competitive athlete. He also enjoys water skiing, mountain biking, and designing and building furniture (and let's not forget Outback shelters). He likes to watch football (points off), but he loves his mother a lot (points back). And, while he does seem just a little too borderline-frat-boy, I have all the confidence in the world that I can influence him right out of that. Given the chance.

So, we have here so far a Boyfriend who is not only sweet, good, cute, and strong, but also very intelligent. The evidence for this takes us all the way back to episode one of Outback Survivor -- the episode when we found out what Colby's luxery item was -- a very large Texan flag. Now, you may or may not realize this, but there are extremely strict rules about what can and cannot be chosen as your luxery item when you are a contestant on Survivor. It can't be anything you can use to survive, really. No food, no medicine, no matches, etc. Under the guise of dedicated patriotism (what was that bit he said about waking up glad to be a Texan?), Colby managed to convince the show to let him take something very useful, though. A very, very large and sturdy piece of cloth. Suitable for, say, building a shelter. I thought that was pretty good thinkin' folks. Pretty good thinkin'. I mean, if all he wanted was to be reminded of Texas every moment, he could've just packed a photo of George W., right? But that's hardly going to keep you dry in a rainstorm. Ya follow?

So, sweet, good, cute, strong, and smart ta boot. All in all, I'm sure you'll agree, a fine choice for this week's beau. But now that I've said all the good stuff about Colby, I have to confess the real reason I started to fall for him. It had nothing to do with his goodness or his brains or any of the other qualities I just mentioned. Nay. Those things just kept the crush from fizzling out. Instead, the state of my affection had everything to do with that fantastic bucket of water he pitched all over that stinky stinker Jerri after the "leading the blind" challenge. I confess I am STILL snickering over that. Classic classic Kodak moment. I apologize for my nastiness, y'all, but did you not just love seeing her face at that moment? After all that crap about chocolate and sex? YES! Colby -- you are the man for me, amigo. You go!

The good news is that I can't imagine for a minute we've seen the last of Colby. He's just too charismatic to disappear now. So, keep your eyes open, kiddos, and I'm sure you'll see him pop up on television in the very near future. And until then, you can just keep flipping through your "Survivor" special issues of all the entertainment magazines (I know you kept those). And wait until next fall, when the third round of the game begins.