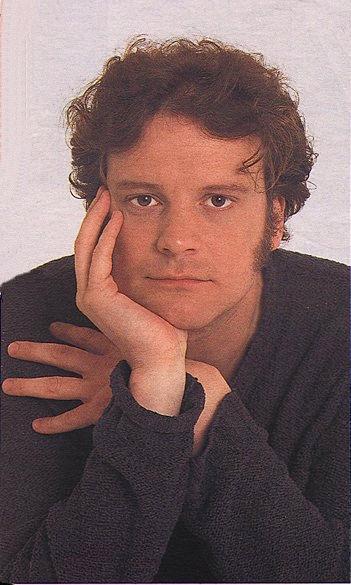 I was laying around in bed the other night, daydreaming and listening to "X Minus One" on the Golden Radio Classics show when I happened to tilt my head to the side (just as some guy was being kidnapped by aliens who were going to destroy the earth because the U.S. had dropped an atomic bomb -- I love the 50's) when SUDDENLY, I realized I hadn't made Colin Firth a Boyfriend of the Week yet!

See, I have about four pictures of Colin taped to the side of my bookcase. Why? BECAUSE I LOVE HIM. Duh. Have you guys seen the BBC production of Pride and Prejudice? Oh my god, you would love it. It's so amazingly wonderful, even I cannot believe it. Colin plays Mr. Darcy, of course, and he's the perfect blend of arrogance and shyness and drop-dead-gorgeousness. Plus, there's NO KISSING until the very end. What this does: makes you nuts (in a good way) with frustration. I still can't watch it without getting kinda queasy and wanting to yell, "Oh, PLEASE, would you PLEASE PLEASE PLEASE just KISS her?!" I love that.

Now, I've seen Colin Firth in a few other things now, too. But I have to admit, they weren't all that great. I've been on the waiting list for one copy of Valmont at the local library for about three months, and I've heard it's kind of like Dangerous Liasons (if not the exact same thing, I forget now). I'm not sure if I'll like him in that, either, though. The problem with all other Colin Firth movies? He isn't in them enough. Seriously. Would you just take a look at "The English Patient" and "Shakespeare in Love" for a moment? A few scenes, all too short and none of them involving ANY sexual tension WHATsoever. I mean, what is the point, I ask you? Why cast Colin Firth is you're just going to waste that face like that. I need frustration! I need tension! I need. . .kissing! What I do not, DO NOT, need, however, is Colin Firth cast as a boring husband who just crashes in his plane and calls it a day. No thank you!

To be honest, and I'm sure there's no faster way to make Colin hate me than by saying this, but I really think Colin Firth should just travel around America (well, okay, how about just Western Washington) and do lots of Mr. Darcy impersonations. Show up, say, in my neighborhood and scowl a lot (sometimes adding just a hint of a smile, though), say lots of grumpy things in that deep voice of his (with that accent, of course), and then, say, kiss somebody. Perhaps somebody with short blonde hair who is about 5' 9" tall with a keen mind and well-developed sense of humor. And if she's not around, he can just kiss me. I'd pay to see him every time without fail, so he could definitely make some money that way. Plus, I'm not the only girl totally in love with him -- just ask my Mom.

The problem with Colin Firth is that in real life, I've picked up hints that he might be kind of a jerk. Like, he's a little pissy about how much fame Mr. Darcy has given him even though he's been in movies for a dang long time now and nobody's ever noticed before. Tough luck, kiddo. But that doesn't mean you have to run off and get MARRIED, ya big jerk. Yes, it's true, about two months after I fell in love with him, he got married (and not to me). God, that's just plain RUDE, Colin. And you didn't even date that girl long enough. And you never even gave me a chance! You're losing MacGyver points for that one, bub.

Still, try as I might, I cannot help but forgive him (read: drool over him) everytime I see that scene in P&P where he walks into Elizabeth's room and tells her that even though he knows he ought to think she's really gross (I'm paraphrasing), he's in love with her anyway. God, you just want to smack him and kiss him all at the same time. I love that in a man! That kiss at the end, after they've finally realized they're hopelessly in love with each other and get married, well, heck, I cry everytime.

MacGyver Factor Score: 95.5%. This was a tough one, of course, because I'm looking at all the old MacGyver scores and trying to place him above certain people but still keep his score kind of low, relatively, because of The Big Dis. Got to be above Harrison Ford (sorry, Hank), but WELL below Paul Gross (who is also married, but got married BEFORE I entered the arena -- far more polite). By the way, there are lots and lots of delightful web sites out there about Colin Firth. Check them out if you ever need a fix.