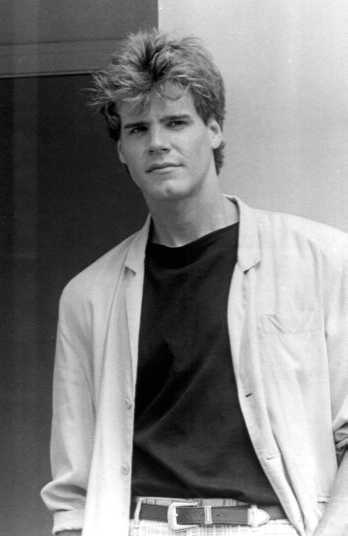 This week's Boyfriend is actually someone a fan suggested. However, lucky for the fan, she suggested it exactly 32 hours after I had seen "A River Runs Through It" on cable (only my second viewing of the film). So, I was already thinking, planning, and scheming. And although she merely requested that I feature "that guy who starred opposite Brad Pitt" (shame on you, honey), I decided to agree with her and go for the gold.

And that's why this week's Boyfriend is Craig Sheffer. Now, first of all let me apologize GREATLY for the terrible pictures I've got up there. Man, who would've thunk there'd be so few web sites out there about a guy who starred opposite Brad Pitt? In a Robert Redford movie! I was truly boggled. Found these at a "Some Kind of Wonderful" web site and a web site about another great Sheffer movie, "Sleep With Me."

If you haven't seen "Sleep With Me," and I'm pretty sure you haven't, I strongly recommend it. It's a little indie film about a love triangle and two of the vertices are Craig Sheffer and future Boyfriend Eric Stoltz. The third vertex is, unfortunately, Meg Tilly (can't stand her), but she's actually pretty tolerable in this. Cute guys aside, it's an interesting film because each section was written by a different person. There's also a great scene with Quentin Tarantino (describing his Top Gun theory). It's not a masterpiece, but I thought the vignette set-up was kinda interesting.

Also kinda interesting was Craig Sheffer without a shirt on. But maybe I shouldn't mention that, since I'm supposed to be an intellectual and everybody knows intellectuals DO NOT LIKE NAKED MEN.

No wait, I bet they've even seen it in Tibet.

Alas, I digress. A little biographical background (a few readers have suggested I might try educating people about the Boyfriends instead of just drooling over them for paragraph after paragraph): Craig was born in Pennsylvania in 1960, which makes him about 3 years too old for me (my limit is 10 over). Quick now, everybody do the math and finally figure out how old Meg is! Here is your word problem, if the previous few sentences were too confusing:

Meg's Boyfriend, Craig Sheffer, was born in 1960. If Craig is only 3 years "too old" for Meg, and we know Meg has an age limit of ten years older, what city was Meg born in?

Hah! I'm kidding. Did you ever have word problems in high school where the question didn't make any sense in relation to the information given to you? My teachers used to throw them in as jokes from time to time.

Did you know Craig Sheffer has also written a novel? And some screenplays? Neither did I, so I checked a few sources in an attempt to find out what the title of the novel was (see? still trying to educate you). However, I couldn't find it anywhere. I find that mighty suspicious, actually. Perhaps he wrote a novel but it was never published, in which case it's pretty cheesy to include that in your biographical information, don't you think? It's like calling me a poet just because I used to write haiku in the margins of my chemistry notebooks in high school.

Dear row of test tubes
How I love to fill you up
With noxious mixtures.

Did I mention that Craig Sheffer also had a cute smile, nice eyes, and occasionally a very nice patch of scruffy facial hair? He also looks swell in glasses and appears to be a tolerable fly fisherman. I wonder how he did in chemistry.

MacGyver Factor Score: 94.8%. Points off for making me really act really ridiculous up there. Points back for being named "Frank" in "Sleep With Me." I love the name Frank.