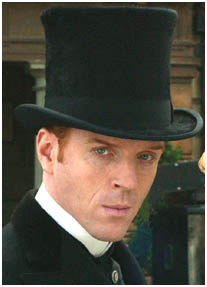 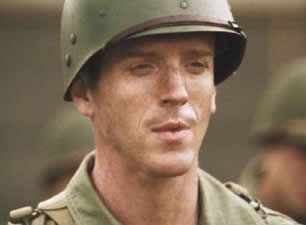 When I first encountered this week's Boyfriend, all the tea in Canada wouldn't have gotten me to consider, even for a moment, his face for this site (and yes, I know the expression is actually "all the tea in China," but there's really a lot of tea in Canada too, and they also have mounties, so I feel it's time for a revision. Vive le revolution!). The character he played when I first saw him was so wholly awful, I could barely stand to say his name without spitting afterwards -- "Soames! ptew!"

And so it went through the entire set of episodes of "The Forsyte Saga" on PBS, starring none other than this week's Boyfriend, Damian Lewis, as the pathetic, desperate loser Soames Forsyte (ptew!).

Loved the miniseries, of course. It had everything: romance, passion, deceit, murder, Horatio Hornblower. . . Can't wait for the sequel, which I hear is coming soon to a Channel 9 near you. Yay.

But back to the Boyfriend. What on Earth could've possibly happened that would make me go from "ptew!" to "woo!"? Well, as so very many of you predicted weeks ago, the answer is this: "Band of Brothers."

And also, of course, this: I'm a sucker for a man in uniform.

Now, before I start gushing, which I'll do in a moment, I did want to state for the record that there were a few aspects of this otherwise terrific HBO miniseries that kind of got on my nerves. It, like everything else in the world, is not perfect. First, there was the tendency towards loud, swooping, "poignant" orchestral movements. And then the fact that said music was all too often accompanied by cheesy close-ups of grim faces. Once or twice -- very moving. Several times in a single hour? Not just cheese, but Chicago deep-dish cheese. With extra cheese. And cheese in the crust. And powdered cheese to sprinkle on top. Now, I'm the first to say that one should behold the power of cheese -- the power of cheese cannot be ignored. But when there's THAT much cheese, you not only can't ignore it, you can't even run screaming from it. And that's when cheese starts to cross over to the Dark Side.

Also, and I can't say this strongly enough: never ever cast Ross from Friends in a serious role. What the heck were they thinking? We're supposed to suddenly think Ross is evil? A meanie? An insecure jerk-face who needs a good knock in the head with a steel-toe paratrooper boot? That'll be the day. I think that might have been the best example of miscasting I've seen in quite awhile.

Thankfully, bouts of Wisconsin cheddar and scenes of Ross shouting "Drop and give me fifty!" aside, the rest of this series kicked my hiney. It follows a group of paratroopers (Easy Company) from boot camp to Normandy to VE Day as they struggle to survive World War II together. The scenes of battle were as horrific as any I've seen and, as I've said before, I think being brutally honest about death in war is one of the most important things Hollywood has to offer us. But let's not get started on that tangent again. If you want to know what I think, check out Adrien Brody's write-up instead.

Not only were the war scenes serious eye-openers, not to mention gut-wrenchers (literal, figurative), but the actual backbone of the story -- the relationships between the men -- was put together by a sincere and sophisticated hand. Sometimes an episode tracked the evolution of a single character as he struggled with his fears and his sense of duty. Other times, the focus was on the group as a whole -- and how so often in battle, your main concern is not with the guys you're fighting, but with the guys you're fighting with -- the guys standing next to you. The ones who have been standing next to you for so long, they've become as close to you as the arms hanging off your shoulders -- closer even, sometimes. Thick and thin. Till death. Semper fidelis (they weren't Marines, but still). Currahee!

Even more, the characters themselves are all based on actual guys. They were really there, those things really happened to them. Each hour long episode opens with a few minutes of interviews with the vets themselves, some of whom break down in tears while they tell their story. Toughest guys in the world crying? Is there anything that is so universally moving as that? Or so universally inspiring?

Damian, of course, is one of the main characters (thought I'd forgotten about Damian, didn't you!) -- Lt. Winters. He plays a quiet man with a good heart and a sharp tactical mind who takes over the command of Easy Company when their CO is MIA after the jump into Normandy. His men call him a Quaker behind his back -- it's obvious to all that Winters doesn't enjoy having to kill. But every man respects him and they all know Winters will be there for them throughout it all. No matter what. Which he is. And for which we love, respect, and admire the hell out of him -- both the Damian Lewis him and the real him. Only the real him times ten. Plus infinity.

Still with me? This is an absolutely wonderful series, starring many many future Boyfriends (trust me on this one), and I encourage everybody who missed it to go out and pick it up. You can find the DVDs at all major video stores -- 5 disks (10 episodes), plus a bonus disk with a documentary and more interviews n' such.

Okay, so, just to keep the good balanced with the crap, let's talk about anothermovie of Damian's I saw recently -- "Dreamcatcher," an absolute dog of a film based on a pretty good novel by Stephen King. I've only seen chunks of it, enough to know I should wait for video. The book was very entertaining, though, and fans of Stephen King's boy-bonding stories (as well as his alien invasion stories) would enjoy it too, I suspect. Damian plays one of the guys infected by the alien bug and he becomes all scary and nuts, which, if I remember correctly, he was very good at. But the rest of the movie is yeech, except for the presence of Donnie Wahlberg as Duddits (future Boyfriend, by the way, along with several of his castmates from "Boomtown" which you guys better start watching next year or ELSE).

Luckily, I suspect that Damian's career is about to take off like a. . . oh heck, like a something or other. A something or other that really takes off. But not a rocket ship, because that's too cliche. His part in "Band of Brothers" has earned him quite a bit of critical attention and praise, and showing up in a Stephen King movie can't hurt him much either. Plus, up next for Damian is "An Unfinished Life" with J-Lo, Josh Lucas, Robert Redford, and Morgan Freeman. With the exception of J-Lo, it's an all-Boyfriend cast, which is bound to result in a blockbuster because surely not a one of us would dare miss such a bevy of Boyfriends as that. That's about 150,000 tickets right there, right gals? We rule.

A quick bio on Damian and then I'll let you go so you can run out and rent "Band of Brothers" (yes, there will be a quiz -- I'm serious). Damian was born on February 11, 1971 (ah, good year) to Watcyn and Charlotte Lewis. The third of four children, he was raised in St. John's Wood, London, on Abbey Road (shoot, now I have "Mean Mr. Mustard" in my head). His parents were heavy theater goers and they often took the kids with them to performances. At age 8, Damian was sent to Ashdown House boarding school in Sussex, about the same time he decided what he wanted to be when he grew up was an actor. His first role was in a school production of "Pirates of Penzance." While he enjoyed his acting classes, though, the rest of school wasn't quite as appealing. In fact, he was a bit infamous for rebelling against the strict rules of Ashdown and, according to him, most of his pranks involved the girls' dormitory. Ah, a boy, through and through. It's good when they're predictable, isn't it?

After Ashdown, Damian enrolled at Eton College, Windsor. While there, he played cricket, soccer, golf, and tennis, but he also put on plays with classmates. When he was 16, he formed his own theater company and starred in its first production, "Nicholas Nickelby." After Eton, rather than progress immediately to college as most boys of his social stature were expected to do, Damian sought an "alternative experience" and, as such, he spent a short time working as a car-alarm installer (yep, that's certainly an alternative), and then took a turn backpacking around Africa. But his love of acting kept him from enjoying himself and when he told his family he'd decided that was it, what he wanted was to pursue a career as an actor, his parents agreed to support him while he attended drama school.

He enrolled in the prestigious Guildhall School of Music and Drama, and studied his booty off for the next few years. After graduating in 1993, he spent a few years with the Royal Shakespeare Academy and took a few small television parts. But just when it looked like his career was taking off, he was nearly killed in a motorcycle accident in 1998. The resulting frontal lobe concussion required months of recovery and challenged Damian's spirit to the core. But in 1999, he made it back to television, in a BBC movie about Bosnia. The movie won a BAFTA for Best Drama Serial, and his career was off.

And the rest is all stuff we just talked about -- "Forsyte," "Band of Brothers," "Dreamcatcher," "Boyfriend of the Week." It's an illustrious career so far (especially with that latter role) and I have faith that he'll continue to charm our socks off with everything he does in the future. You know, with one exception -- the second Forsyte Saga series started filming in 2002, with Damian back in his role as "the Machiavellian bastard" (his words!) Soames, about as opposite from "charming" as you can get. Production finished in December, and it is slated to air sometime later this year. Oh, I'll watch. And I know I'll love every minute. But I make no promises about the spitting.