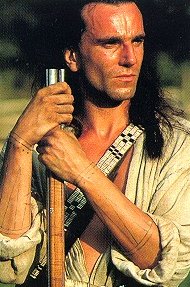 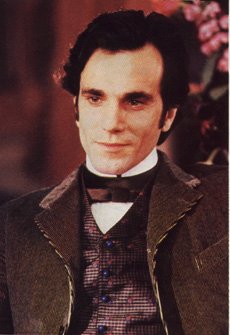 And, as I predicted, I'm sure you all know who he is and already think he's terrific and amazing and all that jazz. Because how could you not? Not only is Daniel Day-Lewis a great actor, but he's also really damn good-lookin'! Just look at those cheekbones! How can you resist a bone structure like that?

The truly strange thing is, I'm pretty sure nobody has ever emailed me suggesting I run him. You may not realize this, but I save all your messages and from time to time I review them and then pull out all the suggestions you make and stick 'em in an ever-lengthening fan-idea list. A brief skim of this list confirms my suspicion -- you all, like me, kinda forgot that Daniel Day-Lewis is great Boyfriend material. And shame the heck on us for that.

In fact, it gets even worse. If it weren't for a particularly annoying feature of cable television, I probably never would've gotten the idea to fall in love with DDL this week. That feature? Cable's annoying habit of latching onto a single movie and showing it over and over and over for a month or two. Practically every night. At the very least three times a week. And the most recent movie I've noticed this happening with was the film I'm sure you all thought of immediately upon seeing Danny's face -- "The Last of the Mohicans."

It is, without a doubt, the movie in which DDL is the sexiest -- and I use that term to describe an appeal that goes further than just looks. He's not just a pretty face (Hawkeye, I mean), he's also an extremely good person. And goodness is a quality I find utterly irresistible.

So, about the dozenth time I stumbled across "Mohicans" (for some reason, always at the scene where the British guy gets burned at the stake -- ugh), I suddenly thought, "Hey, why not?" But before I slapped him up here, I knew I needed a quick refresher course in DDL action. So, I put a few movies of his on hold at the library (trying to cut down on rental fees) and sat back and waited for Sammy the Computer to give me a call. (Sammy is the guy who calls to let users know they have items ready for pickup. He calls me all the time -- almost daily, as a matter of fact. I can always tell when it's him as soon as I pick up -- there's always a moment of silence after I say "hello." A thoughtful pause, I like to think. As though Sammy is composing the perfect thing to say to me at just that moment. And then he begins, in that tinny yet soothing electric voice of his, "This is the Sea-at-tle Public Library call-ing with a message for Megan K. Wood. You have [pause] ONE [pause] item being held for you at this time. . ."

Anyway, it wasn't long before Sammy called to let me know my three Daniel Day-Lewis movies were ready. So, I went and picked them up, brought them home, and over the next three nights, had myself a little DDL Festival. The first was "The Crucible," which was the only one I hadn't seen before. It wasn't nearly as bad as I was afraid it would be (not a big Winona Ryder fan). And while I've never liked John Proctor -- he's such a loser -- I have to commend Danny on his fine acting ability. I never doubted for a moment that he was the swiney man he was portraying. In fact, even though it was Daniel's face up there, I still wanted to punch his lights out. Now that's acting, people!

Incidentally, while we're on the subject, on the set of "The Crucible" is where Daniel met his current wife, Rebecca (I say "current" because nothing lasts forever and I'm sure as soon as DDL reads this, he will be on his way to leaving her for me) (really) (I'm serious!). She's actually Arthur Miller's daughter, though which is pretty cool. Cool enough, anyway, that I forgive him for falling for her instead of me. It could've been worse, after all -- what if he'd married Winona? At least he had the sense to ditch me for a gal with a good set of genes.

Back on track -- I wanted to save the best of the three movies for last, so next I popped in "In the Name of the Father," which is about an Irish youth wrongly imprisoned for terrorism who years later is vindicated by a British lawyer (Emma Thompson). I'd seen this one before, though only once and quite awhile ago, and I was again impressed by Dan's ability to transform what I know to be his true self (I choose to believe that he actually IS Hawkeye) into a person I have trouble liking as much. In this case, a political radical with very dirty hair.

But, of course, the most incredible role of DDL's career is Christy Brown in the third of my movies, "My Left Foot." Now, I saw this for the first time about a zillion years ago, when I was too young to fully appreciate the story, let alone really notice Daniel himself. So, while I still had a vague notion of what the plot was about, I couldn't really picture DDL in it. You'll imagine my surprise, then, when the movie started up and I saw him (underneath all that facial hair). Can you believe the same guy who was in "The Last of the Mohicans" was also Christy Brown? How amazing is that? And this was one of his first well-known movies (in fact, he got an Oscar for it). This was before he'd really had time to polish his talent up. And maybe that's why he was so good, actually. He didn't have an image to fight against or cover up. Know what I mean? Sure ya do. For an example of the opposite, look at Leo. First rent "What's Eating Gilbert Grape?" and then rent "Titanic." No, wait, I won't do that to you. Skip "Titanic." Just take my word for it.

Anyway, I'm rambling. Before I get into biography, I just wanted to mention one more of my favorite Daniel Day-Lewis movies -- "My Beautiful Laundrette." I rented this for the first time about two years ago, after a decade of hearing about it and being really amused and puzzled by the title. It's a great movie, folks. I won't get into it here because time is short, but you can trust me on this one. And if you thought Hawkeye/Christy Brown was a strange combination of roles, just toss in Johnny from "Laundrette" and then you'll really be impressed and amazed.

As promised, a bit of bio: Day-Lewis was born in London on April 29, 1957. Dad was Poet Laureate of England until his death in 1972 (Cecil Day-Lewis) and Mom was an actress, so it's not like Daniel had to overcome a childhood lacking in culture to become the cultural superhero he is today. Not that that makes him any less amazing, mind you. Anyway, DDL started out as a playwright, writing and performing his first play at age 14. That same year, he ran away from boarding school and then had his screen debut in "Sunday, Bloody Sunday" (he played the "child vandal" -- rebel!).

It would be another ten years before Daniel showed up on-screen again, and at least five more after that before anybody really paid any attention to him. In 1985, "My Beautiful Laundrette" came out, to rave critical review, and the career of Daniel Day-Lewis officially took off.

His next big movie, "A Room with a View," is one I saw the summer before I entered sixth grade, while on a zillion-hour flight from the Pacific Northwest to Japan. It was teamed with "Turtle Diary" and "Amadeus." It was, without a doubt, the most excrutiatingly boring flight of my life. And, as a result, I have never been able to rent "A Room with a View" as an adult to see if it's really much better than I remember. I'm sure I'd love it now, to be honest, but just seeing scenes from "Amadeus" show up on television from time to time is enough to rattle my cage. Interestingly enough, since I've become an adult, airplane movie policy seems to have changed. Without fail, every flight I've taken since has showed an excrutiatingly bad children's movie instead. Like "The Great Panda Adventure" and "Free Willy" -- two movies I'm sure I would've loved, say, the summer before I entered sixth grade. Ya just can't win in this world.

After "A Room with a View" came "My Left Foot," and just to prove my point again (that DDL refuses to be typecast) he followed up his Oscar-winning performance as Christy Brown with a movie called "Eversmile, New Jersey," in which he plays a crusading dentist crossing southern Argentina on a motorcycle. You just don't get any further away from "My Left Foot" than that, now do you? Oh wait, yes you do. Next came Hawkeye, followed quickly by the Irish youth, followed by a nineteeth-century aristocrat ("The Age of Innocence") followed by John Proctor (*ptew!*). I haven't seen DDL's next movie, "The Boxer," but I gather it kind of circles back to "In the Name of the Father" and makes him an Irish radical again. That's okay, though. We won't hold it against him.

Daniel Day-Lewis has dated a few notable women, the most notable being Winona Ryder (I think I neglected to mention earlier that they were exes when they appeared together in "The Crucible") and Isabelle Adjani, with whom he had a son. He and his wife Rebecca Miller also have a son, by the way. But you know how I feel about that relationship, so let's not go there again.

In fact, let's end this write-up right here. With a little known piece of DDL trivia: at age 16, our Boyfriend took too many migraine pills and hallucinated for two weeks (I don't know if I actually believe this). As a result, he was wrongfully diagnosed as a heroin addict and institutionalized for a brief period of time. Now, why they didn't do a tox screen to see what was in there cluttering up his blood, I don't know. But that's what the web site I read said was true and, as you all know, if it's in print on the web, it MUST be a fact. In any case, he doesn't strike me as the junkie-type, which is points in his favor, as dating a junkie cannot be an easy thing to do. I really have a thing against dirty hair. Seriously.