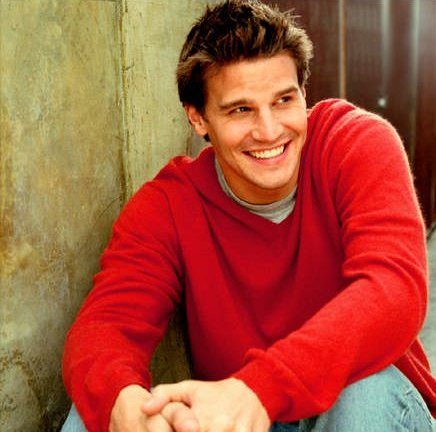 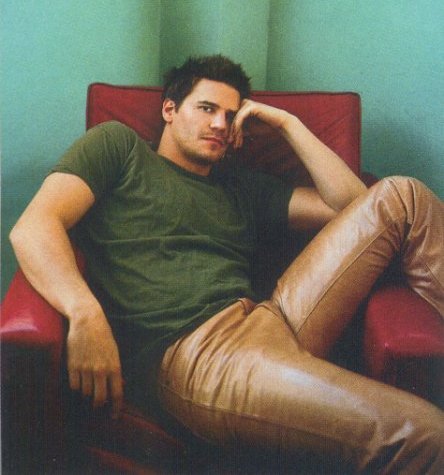 Hi, everybody! I'm back! And ready to get this show on the road. Thanks again to everybody who emailed with niceties -- my family and I really appreciated it. Now, let's get goin', shall we?

I actually had intended to continue with my CSI series this week, but I got distracted by an episode of "Buffy the Vampire Slayer" about 5 days ago (one of the reruns on FX). It was the episode in which this week's Boyfriend, David Boreanaz, who plays "Angel" on the show, came back to life after being staked by the Buffster. Now, not only does he emerge relatively intact from the depths of Hell, which suggests at the very least that the Boy is pretty strong of character, but he comes back, um, NEKKID and then spends most of the episode wearing only a pair of pants.

Okay, friends, I cannot tell a lie. As shameful as this is, I tell you, once I saw his pecs, I was a goner. (And if you are willing to run the risk of seeing them for yourself, which could seriously ruin the rest of your day for you, concentration-wise, check out this picture of Dave in the bath.) I'd been sort of toying with a Davey crush for awhile now, ever since I saw him in the slasher flick "Valentine" late last year. But, to be honest, the reason I was holding off was because I spent the vast majority of my "Valentine" viewing time muttering, "Is that Josh Brolin? Nooooo. Wait, IS it?" Dude, they are SO separated-at-birth, I just can't believe it. Think I'm nuts? Click here.

But holy heckfire, Josh Brolin doesn't have an upper body like that one. At least, he didn't when he was in "The Goonies," which is pretty much the only thing I've ever seen him in. And thus, a crush has been born. Out of the depths of vanity and pure physical desire and into the abyss of sheer dedication, respect, and affection. Um, and vanity. Annnnd pure physical desire. Okay, well, I tried anyway.

Now, if you've read the write-ups on my other two Buff(y) Boyfriends, Nicholas Brendon and James Marsters, then you already know I'm a relatively new fan of the show. I still haven't seen an entire season, for example, though by now I've seen just enough episodes from each one to be thoroughly confused.

Fortunately, I have pals who have been dedicated fans from the moment Buffy first walked into Sunnydale High and they have been extremely patient with me when I've asked questions. Even stupid questions like, "So, um, why are there so many vampires in Sunnydale in the first place?" Duh, HELLMOUTH. Hell-o! Pfft, whadda rookie!

Now, obviously, since Xander and Spike were made Boyfriends first, I didn't start off with many feelings about David Boreanaz's character "Angel." I mean, the early Angel episodes, which were all I'd seen until recently, pretty much just feature him skulking around, looking intense (he's got a great brow for intense looks, hasn't he?). I saw a few scattered Angelus (the evil Angel) episodes, but not any of the truly pivotal ones (heard references since that Angelus tortured Giles -- that alone could've turned me off him for good, so it's all for the best that I haven't seen that ep yet. You just don't mess with librarians in my world and expect to get away with it. No sirree. Bub. You think the Slayer is dangerous? Just imagine, for a moment, what it would feel like to be whacked over the head with a full drawer yanked from the card catalog. Uh huh, do not MESS with the MLS!).

The current season in reruns on FX is the one in which Angel returns to this world after being staked by Buffy in an earlier season (because he becomes evil Angel and massacres half the town's population -- not for nothing doth the Slayer slay, after all). As I said before, seeing him without his shirt on went a long way towards convincing me that there was more to this guy than his skulks and scowls. A looooong way. But it's been nice, too, seeing his character struggle with a mixture of emotions in this current plotline, most of which are of the agonizing, torturous variety. Not only do I love Boyfriends who are a little emotionally unstable (just a little, mind you), but I have a SERIOUS thing for underdogs. And Angel, at least in this stage, has scored major UDPs (UnderDog Points) by being madly in love with Buffy yet knowing that to act on that love would likely kill them both.

Note: I also missed the episodes in which this was first explained, but have since been filled in -- it goes a little something like this: if Angel achieves true inner peace and happiness, he will quickly revert to Angelus status (evil Angel) and kill everybody in sight, including Buffy. Dude, that ain't good, right? So, when do you achieve that kind of perfect joy? That state in which nothing bad in your life seems real anymore and the only thing you can feel is complete smiley-face? Why, when you and the love of your life, your soul mate, your one and only, finally round third and slide into home plate, so to speak.

And for all you youngin's who read this and don't understand my innuendo, yes, I am saying what makes Angel happy is playing baseball with Buffy. Why? Because baseball is fun! Go Mariners!

Ahem. Got to keep this site family-friendly, you know.

So, anyway, the other good thing about this plotline (aside from the scorage of major UDPs, I mean) is that it means Angel and Buffy's relationship is obviously doomed, leaving him open to other possibilities. Now, I can't watch his spin-off show "Angel" until it hits syndication too (so I can start from the beginning), so I am blissfully unaware of his current dating/marital status. And, frankly, I may never watch "Angel" just so I can stay ignorant forever. I'd much rather spend my time dreaming about my guest role on the show and its potential for extended kissing scenes. Ya follow?

In real life, I'm sad to say that I DO know David's marital status. He's not only married, but married to a Playboy Playmate, damn it all. So, unless he secretly prefers brains over boobs, I'm definitely not going to have much of a shot. Which is not to say I think his wife is without brains. But which is to say I'm sadly without much in the boob department.

Now listen up, you. I know how you people think. And comments about whether or not her boobs are real, which might disqualify her from both the above categories, will not be tolerated here. Keep them pups to yourselves, my friends. Because David might one day see this site, you know, and I'm still reeling from the fact Chris Noth has seen what I said about his schnoz. Oy vey -- the horror! So, please, for my sake, let's not burn bridges with Dave, too. I'd hate to miss my chance to ogle those pecs in living color.

Again, not that I think all David has to offer us is his (really nice, did I mention they were REALLY nice?) pec-age. He's also a pretty good actor. And also, admirably, one who is not afraid to make movies of my personal favorite genre: total dogs. Case in point, "Valentine," which is a teenage slasher movie of the doggiest of quality. Not an original bone (arf arf!) in its body, but it's still a heck of a good time (well, if you're me, anyway). And while we don't get to see David Boreanaz take his shirt off, we do get to see him toggle back and forth between sweetness and scariness, something he's actually quite good at. The ending surprised me, which is more than I can say for the majority of films in the DG (Dog Genre), and I actually have enjoyed the flick a number of times since my first viewing. That tells you something right there, right? You know, I mean, other than that I have absolutely no taste when it comes to film. Ahem.

So, yes, his body makes my body go foom. But he's also got enough talent to stand out in "Buffy," which is a show of great genius and marvelous cast, AND to make a movie like "Valentine" actually worth the rental fee. A great body alone cannot do these things. And if you don't believe me, then you haven't seen the DG flicks I've seen. Ho boy.

Now, time for a little biography about Davey Boy: David Patrick Boreanaz was born on May 16th, 1969 in Buffalo, New York. He is the third child and only son of Dave Roberts (a weatherman in Philadelphia) and Patti. Inspired by Yul Brynner in "The King and I," Dave decided at age 7 that what he wanted to be when he grew up was an actor. After graduating from Ithaca in New York, where he acted and studied film, he moved to LA, like all good wanna-bes do. There he spent the majority of his time doing scut jobs, snagging one small role in "Married with Children" but not a whole lotta else.

But, as everybody knows, strange things can happen when you're in Southern California, and one day, while Dave was out walking his dog Bertha Blue, he was discovered by a manager working on this new show "Buffy the Vampire Slayer." He called the casting director, got David an audition, and the rest c'est histoire. After a few years on "Buffy," Boreanaz got his own spin-off show, "Angel," which is in its third or fourth season, I think, and is still going strong. Go David!

Next up for Dave is the movie "I'm With Lucy," starring Henry Thomas and Monica Potter (Dave's listed third in the cast list on the IMDB, so it's a fairly major part for him). I couldn't find out much about the plot, but it looks like a romantic comedy. So, keep your fingers crossed that there will be shirtless scenes and a lot of smooching. And maybe a few dozen of those paralyzingly yummy crooked smiles of his. Hoo, hubba!

In the meantime, don't forget that "Buffy" runs twice a day on FX, (at 6 and 7pm, Monday through Friday). If you haven't seen the show yet, I'd recommend waiting about two or three more months before jumping in -- try to catch it from the beginning. It's really great, you guys, and worth the effort (though even I have to admit it's hard to stay caught up when you have to see two hours of it a day to stay on top of things). Silly vampire plotline aside, it's one of the smartest and funniest television shows I've ever seen. Honest. And, well, let's just take one last look at that bathtub picture again, shall we? Need any more encouragement? Didn't think so.