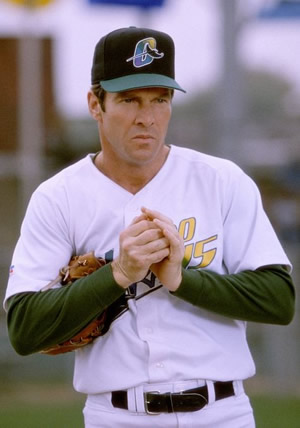 Wait a minute, wait a minute. That's no way to start a write-up! Oh, hold on a second. Come to think of it, it's not a bad way to start this particular write-up at all. And why is that, you ask? Because it's actually sort of the phrase that made this whole write-up possible.

Okay, well, it went a little something like this: you know how in your brain there are often two sides to every issue, usually bickering back and forth incessantly right about the time you really must get to sleep or else tomorrow is really gonna suck? I call my two sides Abbot and Costello (or Bud and Lou for short). Abbot is, obviously, the practical, rational side. The side looking out for my best interests. Costello, on the other hand, can be summed up with one word: hedonist. Or wait, two words would be better: ridiculous hedonist. And when it came down to deciding whether or not to feature Dennis Quaid as a Boyfriend, Bud and Lou had a seriously long and relatively tedious duke-out.

Because this is a special edition of the Boyfriend site, I'll do you a favor and let you in on the process. Let you behind the scenes, into my head. Here's a transcript of the final battle, fought inside my skull at about 11pm last Sunday night (and, yeah, Monday really really sucked!).

Abbot: No! No! No! Dennis Quaid is a cocky, likely-alcoholic creep who dances on bar counters and picks up random chicks left and right! He's no kinda role model for today's youth. No kinda!

Abbot: OK, then how about this? You know he's still very close to ex-Meg Ryan, right? And has kids with her that he's very dedicated to? You're only asking for trouble when you go after a guy on the rebound like that. Especially when he's still so obviously attached to his old life. He's never REALLY going to leave Ryan. You'll just be signing on for a lifetime of misery! Jealousy! Possessiveness!

Abbot: You know that when the tabloids get ahold of this, you'll just be referred to as "The Other Meg," right? You won't even be a real person to them -- just someone negatively compared over and over again to The Real Meg. The Worthy Meg. The Way-Cuter Meg! You really want that??

Abbot: Okay, ever heard of the term "enabler"? How about "codependent"? You know Dennis has all the classic symptoms of alcoholism, right? You fall in love with him, you're just begging for DSM-IV classification!

Abbot: Oh for God's sake. . .FINE!! FINE!! I GIVE UP! But, I am telling you RIGHT NOW, Lou, that next time we don't even discuss it. I want to veto, WE VETO. And don't think I don't know you've been off researching Patrick Swayze in your spare time lately. Hah! Patrick Swayze! You can just give up on THAT hope right now, bub. You ain't nevah getting Swayze past me now. Veto, veto, veto!

So, you see what I mean? It was the persistence of the Ooh, But Yum that has resulted in this week's write-up victory. After months and months of rabid discouragement from the left brain. Now you know just how amazingly hard it can be to be me sometimes. I'm sure it's given you a much broader perspective on the challenges of keeping a site like this going. I mean, anybody else, and I bet I'd be institutionalized by now.

And as for Patrick Swayze, well, we'll just have to see about that.

Now, since I just wasted so much space with that whole thing, I'll try to keep the rest of this short. I've actually had what we here at the Boyfriend site call "a thing" for Dennis Quaid for just about as long as I can remember. I've seen gazillions of his movies and he's one of those guys who is definitely getting better-acting AND better-looking with every passing birthday. Now that he's kind of craggy and crinkled, he's sexier than ever before and it doesn't hurt that his last few movies have been mighty fine, either.

Instead of trying to talk about every single Dennis Quaid film I've ever seen, though, let me just quickly break them down into three lists. Clip and save! This will be a handy reference guide for your next trip to the video store (please note, however, that my definition of a "good movie" is not necessarily anywhere near your definition -- just a warning).

THE OH-MY-GOD-WHAT-WAS-HE-THINKING?
Wyatt Earp (1994) (Kevin Costner MUST BE STOPPED)
Flesh and Bone (1993) (also with ex-wife Meg) (they really should've quit working together after D.O.A. -- might've saved their marriage)
Undercover Blues (1993)

Note that the longest list is "The Good" list. This says just about all you really need to know about his talent. And the movies in "The Bad" list aren't examples of poor acting on Dennis's part. In almost every case, he made the movie worth watching, even though the movie itself may not have been worth Dennis Quaiding. It's really just the Oh-My-God movies that aren't worth the plastic they're encased in at the video store. Not even Dennis's boom and swagger could rescue those miserable, torturous, seventh-level-of-Hell films. And I even saw "Wyatt Earp" in the theater -- you can only imagine the horror.

A quick little biography, since we've fooled around long enough here. Dennis was born on April 9th, 1954 in Houston, Texas (hence the Southern charm, which is sort of what I'm referring to when I say "boom and swagger," in case you were wondering). His father was William Quaid, an electrical contractor, and his mother was Nita, a real estate agent. Dennis has a brother, Randy Quaid (who is another favorite of mine -- his character in "The Paper" with Michael Keaton reminds me a lot of my spouse), and also a half-bro and half-sis.

He went to high school at Bellaire High in Bellaire, Texas, where his interest in acting began. After graduation, he enrolled at the University of Houston, in the drama program, but he dropped out at age 20 to follow Randy to Hollywood and see if he couldn't make it big there himself. After an entire year of struggling, he finally got a role in a movie called "9/30/55." It didn't do much in the theater or for the critics, but it did kickstart Dennis's life on the big-screen, and two years later, he was in "Breaking Away," a movie that finally got people to sit up and pay attention. It wasn't really until he was cast in "The Right Stuff" in 1983 that he began to get serious roles in films, however, despite the fact he was an absolute GENIUS in Jaws 3-D.

When not acting, Dennis loves to perform with his band, "Dennis Quaid and the Sharks." He has played musicians in three movies and has also contributed to the soundtracks of some of his films, so it's not like he's just some bozo rock-star wannabe. The man truly has talent! I think the band occasionally goes on tour, so if you're curious, check on-line for more information.

A little bit of trivia: Dennis is actively involved in the International Hospital for Children, based in New Orleans. He's divorced (unless you are from Mars, you knew that already), but has joint custody of his son Jack. His favorite director is David Lean ("Dr. Zhivago" -- yes!). His favorite word is "bliss." His favorite sound is "puppies breathing." If he could be something other than an actor, it would be a veterinarian. He loves to play golf, and he's left-handed. Oh, and as if all this weren't impossible enough to resist, he's also 6' 2" tall. The absolutely most perfect height there is.

Coming up next for Dennis Quaid are three movies: the first is "The Devil's Throat" with Sharon Stone, a thriller about a family who move into a new home in the country and are terrorized by its previous owner who wants his dream house back. Ooh! Scary! The second is "The Alamo," co-starring ex-Boyfriend Viggo Mortensen (new write-up on Viggo is coming soon, by the way). "The Alamo" is about, uh, the Alamo. Lastly, Dennis is scheduled to star in a movie called "Tomorrow," which is about a scientist who must figure out a way to rescue his son (played by ex-Bf Jake Gyllenhaal) when abrupt global warning threatens to envelop New York in a new ice age. Sounds like my kind of movie! Vive le disaster flicks!

So, happily, Dennis's career doesn't seem to be slowing down a single bit. With critics fawning all over his latest movie, "Far From Heaven," I'm also wondering if perhaps this might be the year he finally gets the professional recognition he's due. Like, say, an Academy Award nomination? I mean, that he wasn't nominated for "Jaws 3D" was slap in the face enough. Give the man his Oscar already! Dennis, sweetie, I'd vote for you if only I could. In the meantime, I'll keep watching every movie you ever make, over and over. Especially the ones in which you perform shirtless, not that that's all there is to your charm. And, if your band ever comes to Seattle, give me a call and let me know? I'd be happy to show you around town in exchange for a nice, friendly smooch on the forehead. La la la, yum!