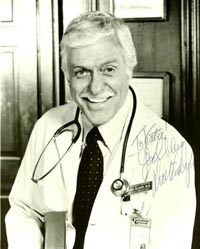 Happy New Year, sports fans! To kick off another year of Boyfriends, I am planning a major redesign of the Ex-Boyfriend Gallery. There's getting to be quite a few names in the list and I need to make it easier to look at AND more entertaining for you guys to breeze through from time to time. I do this for two reasons: one, you deserve it; and two, I'm a geek so it's fun for me. So, keep an eye out for the changes. They may occur sooner or they may occur later. But it'll be one or the other, for sure. This week's Boyfriend better not need any introduction (do I say that at the beginning of all of them or is it just me?). If you don't know who Dick Van Dyke is, you're an idiot. Plain and simple. Oops, sorry, I mean, maybe that isn't fair. Not everybody is as aware of famous figures as I am. I even know someone who doesn't know who Fonzie is and she's MY AGE. That's a little unnerving, actually. However, if you don't know who the Fonz is, you probably won't recognize Dick Van Dyke either. Because, and this must be obvious to you by now, you are from Mars.

But the rest of youse guys better know what I'm talkin' about or it's the axe for you.

Now, your next question will be, "Dick Van Dyke?!" And my answer to that is, "Yes, he IS old enough to be my grandfather." In fact, I'd really love it if he WERE my grandfather, though I wouldn't get to feature him as a boyfriend that way. But Dick's had gray hair almost as long as Steve Martin has and he still looks young to me. Plus, he's plain ol' freakin' hilarious, folks. All it takes to make me happy is one of his dopey grins (like in the Mary Poppins photo above) and maybe a sparkley look or two. Sparkley, I say, because those eyes are always glimmering with the look of somebody who is having a damn good time with life. That's a look I like to see when I start thinking life stinks. It's hard not to feel better when Dick grins.

The best thing about Dick Van Dyke, though, is that you can see him all the time on television now because of his ridiculously entertaining show Diagnosis: Murder (nightly on Pax TV and every Thursday on CBS). I'm sure lots and lots of people think this show is dorky. In fact, my sister refers to it and every other show starring an old person who does detecting of any sort "Matlock." She just lumps them all together and dismisses them with a wave of her snooty Friends-watching hand (wait, can hands watch sitcoms?) and a derisive snort.

Anyway, back to Dick Van Dyke. Here's the thing: Diagnosis: Murder is supposed to be dorky. Why do you think they cast Chachi as a doctor in the first season? (You must've suspected I'd figure out how to link back to the Fonz in here somewhere.) But Chachi is gone now and he was replaced by a super-cutie named Charlie Schlatter (future Boyfriend of the Week, no doubt) and Charlie is a lot of fun to look at. Plus, also co-starring with my Boyfriend is my Boyfriend's son (who is also older than I am and probably a better choice age-wise. I don't like him as much, though, because he's too serious and he has a jaw like a superhero). It's fun to watch dad and son have fun together on that show. And you just KNOW they are. Because who better to have for a dad than a goofy comedian? I mean, MY dad's a goofy comedian and I love him to death!

I love Dick Van Dyke, is what I'm saying here. He's tall, handsome, funny, and intelligent. And married. And probably older than I think he is. Which is okay since I'm pretty sure he'll never actually call (though I'll treat if we go out, Dick, and I'm positive we'll hit it off!). Anyway, it makes me happy knowing he's out there, and that's a pretty damn nice thing to say about somebody. If I do say so myself.

MacGyver Factor Score: 99.5%. 10 points off for being older than my parents. 9.5 points back for being a coot instead of a fogey.