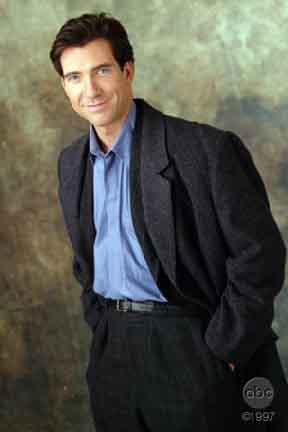 This week's boyfriend is pretty timely considering the fact he was just voted one of the 50 Most Beautiful People by People magazine. But, really, I've been thinking about him for a long time now. Ever since I saw Home for the Holidays about two years ago.

Yes, Dylan McDermott was in that. I saw it on the airplane when I was flying home for Christmas and let me tell you, that was one of the best flights of my LIFE. Finally a movie starring adults instead of kids and whales/elephants/pandas/etc. God! Plus, Dylan was wonderful. Funny, smart, and, most importantly, incredibly gorgeous.

I especially like two things about him: one, his eyes. Wow, I'm a sucker for blue eyes. Two, he almost married Julia Roberts but then he dumped her and married someone who doesn't make the hair stand up on the back of my neck everytime she laughs. Of course, I don't know who she is, but that's not the important part. By the way, speaking of marriage, you know how sometimes I'm happy when the Boyfriend is married and sometimes I'm not? It's all in the attitude. Dylan has a fantastic married attitude. This is best demonstrated in the photo of him in People where he's draped on a chair, looking incredibly yummy, and dangling that ringed left hand in full sight of the camera. As if to say, "Yes, I'm this happy because I'm wearing THIS ring on my finger." Very sweet. Gotta love him for that.

I haven't mentioned The Practice yet! As you may or may not know, Dylan has his own hit TV drama! And it's a courtroom/lawyer kinda show! I love it! Just last night while I was watching, as a matter of fact, I realized how much I love the characters and the way they all interact. It was the closing scene that did it for me -- the gang was circled around Jimmy in the hospital (Jimmy got shot! I almost died from the suspense!) playing cards together with him and Lara Flynn Boyle's character (whom I have a love-hate relationship with) was standing outside the room watching them. She's been thinking about coming to work for the firm, see? And it really struck me then how much I DON'T want her to. Not just cuz I can't decide if I like her or not, but because I don't want her to muck with the dynamics of the group.

I was mentioning this to Jim when I noticed he had a look on his face that said, "What the hell are you talking about?" Then I realized what was wrong with this picture -- I was talking about these people like they were REAL! Now, some might think this is because I've been so sick lately. TV has been my world, my buddy, my only means of entertainment! But, really, some shows just do that to me. The writing and the characters and the acting is so good, I really get lost in the fantasy. Don't you love that? Man, I really love that.

So, I'll stop rambling now. Look at Dylan, fall in love with that strong and handsome face, and watch The Practice Mondays at 10pm.

MacGyver Factor Score: 96.5%. Points off for real unattainability. He's even got a kid, folks!

Dylan's Internet Movie Database page.
A fanpage for "The Pracice"