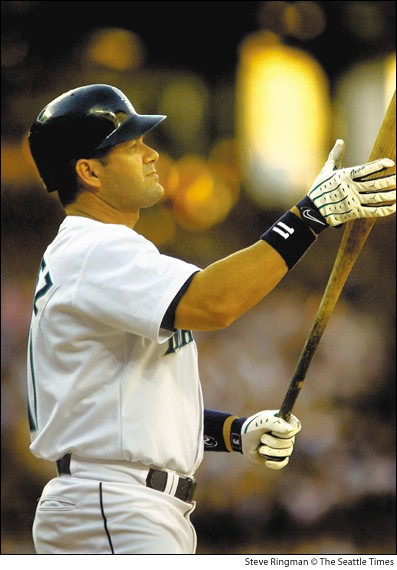 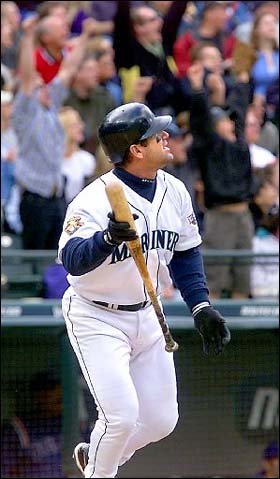 Okay, so Kevin Kline ended up being the Boyfriend of the Week two weeks in a row. And NO, he never called me. But that's okay. I still love him. This week's Boyfriend is even better than Kevin, though don't tell him I said that, please. It's Edgar Martinez! Looking around on the web today for a nice photo of the only baseball player who makes me swoon even when he strikes out, I found out a lot of verrrrrry interesting things about his life off the field. For example, he owns his own company. Betcha didn't know that. Embroidery, I think. Also, he's written a childrens' book called Patience Pays. He also used to have his own little web page (www.edgarzone.com), but it appears to be defunct now (bummer!). Still, all in all, a very active hombre!

Edgar Martinez is not only cute, sweet, and nice, but he also got whacked in the head with a flying bat, took five stitches, and then got up and hit a single. Now that's baseball, my friends. I'm tempted to say something cheesy like "you gotta love this guy" but he's worth more than that. Edgar, if you're reading this, I'm 5'9" with short blonde hair and a Master's degree and my phone number is in the book, baby. And yes, I know you're married. But all I'm asking for is ONE LOUSY DATE! Or one terrific date. In any case, I just want an Edgar kiss on the cheek.