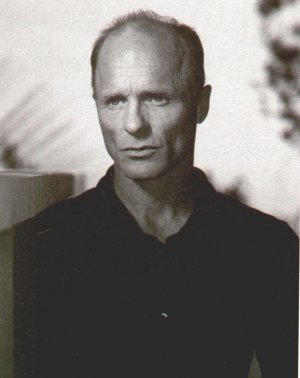 Okay, everyone, this is it! The last official Boyfriend of the WEEK. From now until at least about July or August, things are going to have to slow down a bit. The boyfriends are going to become fortnightly instead of weekly, and I won't be doing my own photo searching anymore either. So you'll end up settling, in some cases, for second best. But hey, second best is better than nothing at all. So, learn to live with it, okay?

This week's boyfriend was a real pain in the butt, to tell you the truth. And it had nothing to do with my hands hurting or time crunches either. It was because there just aren't ANY good pictures of Ed Harris on the web. Like, ANYWHERE. In fact, one of the above photos I had to steal from a competitor! There's some girl out there named Theresa who's got a page of boyfriends she (rather crassly, if you ask me) calls her "To-Do List." Oh, hardy har har. That's not witty!

I bet she's about 16 or something.

Anyway, Ed Harris -- why is he so hard to track down, anyway? He's so cute! Yes, he's balding. I know some of you are going to have problems with that (just wait until I do Jean Luc Picard, though). Also, I hear from sources that he's only about 5' 9" tall. Yow! That's short, Ed! But look at him! He's just incredibly good looking. I have a weakness for crinkly eyes and he always plays guys who are sweeties. Really. Look at the movies The Abyss or Absolute Power. Look how he loves his women! I could use that kind of love from someone myself. *sniff* Not that I'm expecting Ed to be The One who calls me or anything, but look, Eddie baby, I'm waiting and I'm totally nice and cute too. Swear!

Ed Harris is one of those actors who just sort of pops up in a film kind of out of the blue too. A little added bonus to a movie you might've thought would be totally lacking in cute-boyfriend material. I like that. What I DON'T like is the fact that 9 out of 10 of the web sites I hit using lycos and searching for Ed Harris pictures featured a photo of Ed sitting in a chair with a beer bottle balanced on one knee and his legs spread apart. And he was only wearing a towel and IT WASN'T SECURED IN FRONT, if you know what I mean. Now, that's a little more than I needed to know about Mr. Harris. In fact, it's sort of shaken me up a bit. Kind of like the first time you see a member of the opposite sex naked. It's, um, hard to look away, but at the same time, it's a little unnerving.

Anyway, I wonder if he knows that picture's out there. I also wonder if he's married. No wait, don't tell me that. I can't bear it.

MacGyver Factor Score: 93%. Look, yes, I love him. But I'm telling you, there's no mystery if you see the guy nekkid before you've ever even SPOKEN to him. It's taken away some of the romance. Though, and don't tell my mom I said this, I kinda went back to that picture today on purpose. Just to take ONE MORE peek. He's got really nice, um, calves, you know?

Click here to go to the IMDB page on Eddie.