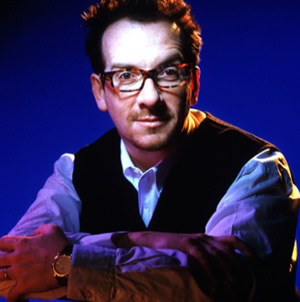 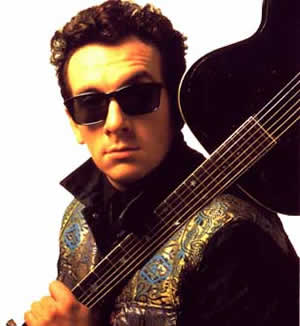 Here's a new one -- this week's Boyfriend comes to you courtesy of my husband. Which is not to say that he is the one writing this. Or that he's even aware of, or has stamped his approval on, this week's selection. Instead, you have him to thank for the reason I am so madly in love with Elvis Costello in the first place. Because he did two things over the last 8 years that brought this crush about. And he did them completely unintentionally.

The first one was something my husband did years and years ago when we first met, and it begins, as so many of my stories do, with a confession: when I was in high school, I hated Elvis Costello. The only song I'd really ever heard of his was "Veronica" and for a girl who dressed in a lot of black and mostly listened to The Pixies, "Veronica" was pure pop torture. When it came on the radio, I changed stations faster than, well, something really, really fast (sorry -- short on analogies today). Then I went to college, went through a really frightening British pop phase, met a friend who started to get me back on-track music-wise, and finally hooked up with my husband. After a few dates, he quite innocently asked me to come over to his house so I could see where he lived and slept and ate day-old spaghetti.

I ended up sleeping over (just sleeping, seriously, Mom). And that's when I learned this about my spouse: the very first habit I would have to break him of before we got serious was his need to listen to music at night in order to fall asleep. Because for me, any sound, particularly music, makes nodding off to dreamland virtually impossible. There's no "falling asleep to music" for me. There is only "singing along, getting the song stuck in my head, being awake all night trying to SHUT THE SONG UP and cursing the evil torture master who ever came up with something so damn catchy in the first place."

But before I broke him of that habit, as these things take time and tact, I had to go through a few nights with him where he fell asleep while I twiddled my thumbs and waited for the tape to flip over. Lucky for me, and by proxy, us, the tape he most often chose to play before bed was Elvis Costello's "King of America" album. A few nights later, it was the music I would forever associate with my husband.

This association was only furthered when, a year later, he wrote me a love letter for Christmas that quoted the song "I'll Wear it Proudly" ("Well I finally found someone to turn me upside down / And nail my feet up where my head should be / If they had a King of Fools then I could wear that crown / And you can all die laughing because I'll wear it proudly"). Lots of Elvis Costello's songs are romantic and sweet, but "King of America" in particular is packed with some of the most beautiful music you will ever hear. Music that makes you ache. Music that is so right on, sometimes you have to rewind a part just to hear that lyric again. And again. And again.

So, of course, "King of America" is my favorite Elvis Costello album ever. Just say the phrase "Little Palaces" and you can make me burst into song and tears at the same time. Quite a spectacle, really. But I've branched out a lot since then. I love the song "Veronica" now, for example -- catchy pop tunes aren't as hard for me to swallow now that I've let go of so much of my teenage angst. And that goes double when such an incredibly smart, witty, and sexy goofball is behind the microphone.

I say "goofball" solely because of the glasses, by the way. And I say "smart" and "witty" because of his lyrics, some of which have stayed with me regardless of the music behind them (think "Tramp the Dirt Down" or "Oliver's Army"). It's actually pretty rare for me to hear a song and think of it as poetry put to music, as cheesy as that sounds. But Elvis Costello's lyrics stand on their own as some of the greatest poetry of all time, cheese be damned. And in this way, he is, for me anyway, right on up there with Tom Waits and Leonard Cohen as one of the few musicians who have completely blown my mind with their words as well as their songs. For a look at his lyrics, check out some of the links below, because if you get me started on Elvis Costello lyrics, I will go on FOREVER.

Oh, and I say "sexy" (see "sexy," above) solely because he's not only witty and smart (always a deadly combo, of course), but also because he's handsome and has a unique sense of style (see "goofball," above). The man has Meg-Material written all over him (plus, he's named Elvis, which is just really, really fun to say. "This is my Boyfriend. ELVIS." You see what I mean?)

Okay, so, that's the first story about my husband's influence on this week's selection-making process. The second way my husband led me down a path towards Costello Lust (inadvertently, and that goes double for the "lust" part) was when he gave me a gift certificate to a music store for my birthday this year. Now, if a gift certificate sounds like a lame gift for a husband to give her wife, let me clarify it by saying that I almost NEVER buy CDs anymore because they seem like an unnecessarily extravagance now that we're saving up for a house. And yet I'm constantly complaining about how tired I am of all my music. I'd never buy a new CD for myself, so he made it literally impossible for me not to. By spending the money already, and then making me pick out the CDs to cover for it. See? I told you he was nice.

Of course, give me a gift certificate for $30 and I'll end up spending $60, which is precisely what happened upon this particular occasion. I went into the music shop expecting to buy two CDs I've been hearing a lot about lately, and while I was looking for them, I stumbled across the Elvis Costello section. And there I saw a two-CD Greatest Hits collection! Who could possibly resist? Not me, obviously. And now you know why my VISA bill keeps horrifying me each month. I'm a terrible impulse shopper. Go in for one thing, come out with a credit report that would bring Donald Trump to his knees. (That's a joke, Ma. My credit's cleaner than Mr. Clean himself, Scout's honor. Or, even better, Atticus's honor. Because if you can't trust Gregory Peck, who CAN you trust?)

Holy Tangential Central, Batman! Where was I? Oh yeah, okay, so, I've been listening to the two Elvis Costello CDs almost constantly since I bought them and they are totally great. My only complaint is that there are a couple of songs on them from his later records, which occasionally sound a little too much like elevator music for me. Oh, and my only other complaint is that "Poor Napoleon," one of the greatest songs to walk down a street being sassy to, is missing from the compilation. But hey, it's still a mighty fine collection of Elvis tunes. And just having them all in one place makes it well worth the occasional fast-forward over musak or the fact I have to walk down the street being sassy to "Poor Napoleon" in my head instead of in my ears. Trust me on this. If you love Elvis, this set is worth an addition to your collection and deduction to your checkbook.

And now for a little background. First and foremost, I feel it's important to let you know the truth about Elvis Costello's totally hip name. It is, unfortunately, not Elvis Costello. Elvis was actually born Declan Patrick MacManus, which is actually a cool name all by itself, though absolutely nowhere near as spiff as "Elvis Costello," which in only five small syllables manages to say quite a bit about the man himself. Quite a bit more than Declan Patrick MacManus says, at least, which is merely this: he's Irish. Especially since Declan was actually born and raised in England.

St. Mary's Hospital, Paddington, to be specific. On August 25th, 1954. He is the only child of Lillian and Ross MacManus. Father Ross is where son Elvis got his musical talent, by the way. He was a trumpet player and singer in a popular big band called "The Joe Loss Orchestra."

Elvis went to school in West London and Liverpool, but dropped out in 1972 to pursue his music. He started out with a day job as a computer operator at Elizabeth Arden (which explains the geeky glasses, at the very least) and played folk clubs and pubs at night. In 1977, he signed with Stiff Records and changed his name to Elvis (after the King, of course) Costello (his mother's maiden name). On his days off from Elizabeth Arden, he recorded "My Aim is True," which was finally released in July of 1977. Its song "Alison" was a huge hit in England, and before he even knew what had happened, Elvis Costello was on an escalator to the top of the pop charts. A really FAST escalator.

The rest is pretty much history. Except for all the stuff that hasn't happened yet.

There's actually tons more to say about Elvis Costello's musical career -- lists of great albums, stories about what his life is like, personal anecdotes, etc. etc. etc. But really, we've fooled around long enough here. Let's all turn off our computers for an hour and pop in "King of America." And if it reminds you of my husband, I'd really rather you keep that information to yourself. There are some things I just prefer not knowing. Know what I mean? Get your own Boyfriend singer/songwriter to remind you of your own husband! I got dibs on these two!