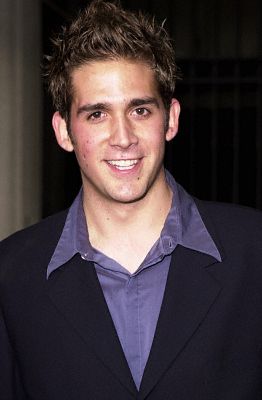 A month or two ago, I mentioned that I had a whole series of Boyfriends from the hit CBS show "C.S.I." planned. The good news is, that series continues this week with Eric Szmanda, Man of Many Last-Name Consonants, who plays lab geek Greg Sanders on the show. The bad news is, that means there is only one installment in the CSI series left -- the "mystery" installment. (Ooh, suspense! Intrigue! Hoopla!) And, speaking of the mystery installment, I just have to say that so far, all your guesses have been wrong, especially the one woman who wondered if I was going to feature the show's gas chromatograph mass spectrometer ("Hey, if you can make a puppet a Boyfriend, why not a billion dollar piece of lab equipment?"). Now, as an old science geek myself, I have to admit it's not that bad of an idea -- it's a pretty cool gadget, after all. But sadly, it's no Sock Puppet (hard to cuddle -- all those metal corners) and I also worry that it might alienate some readers. You think the fall-out from the Buffy series was heavy, just try making lab equipment your Boyfriend for awhile and see who doesn't come a'knockin', my friends. . .

Anyway, where was I? Oh yes, bad news. It's bad news because, of course, it means I won't get to talk about CSI anymore, and folks, I just love that darn show. Apparently, a lot of you do as well, since I just read this morning that it actually had more viewers this season (all together) than ER, the old numbah one, did. And we all liked ER for the same reasons, right? Science, technology, blood, and cute guys. What else does a primetime drama really need? Unfortunately, it became far too melodramatic and sappy for us (when I hear there's a storyline about small pox coming up, I want a lot more epidemiological science and a lot less smooching in quarantine). So, our attention wandered all the way over to CBS where it was eventually sucked in by another show full of science, technology, blood, and cute guys. And THIS one had close-up shots of bullet wounds! We promptly swapped one acronym for another (out with the ER, in with the CSI) and quickly realized that, yeah, baby -- we were HOME!

One of those cute guys, is, of course, Eric Szmanda, who looks like he must be a newcomer because he's so young and dorky-looking, but who actually is an old television veteran. Anybody watch that show "The Net" back in 1998? Yeah, me neither, but I gather from Eric fan sites (which are sadly few and far between) that he was not only great on that show, but that he sported a rather dandy hairdo, consisting mostly of a lot of spiky, messy bits. Spiky messiness is good -- it's a look I often aspire to myself. And while it's true that Eric's current character Greg also occasionally attempts the spikey/messy look, he's much more likely to exude "yes, I did just roll out of bed after sleeping in my clothes" vibes than anything resembling hip punkness. So, we kind of missed out on the cool hair thing, I think. Sadly.

The good news is that we know the hip punkness is still in there, though, right? And how do we know that, boys and girls? Because geeks like that are ALWAYS closet punk rockers. Trust me on this one, kids. I'm a geek myself and my CD collection is packed with music that would scare your grandmothers. So, knowing me, this choice of Boyfriend ought not to have come as much of a surprise. Geeks of a feather, and all.

But, truth is, Greg is not just a geeky lab punk -- heck no, there is more to this attraction than just that. He's also incredibly cute (even with the bed-head hair), smart, funny, shy, weird, and MADLY in love with Sara Sidle (played by Jorja Fox on the show). Sara is well-worthy of his crush, in my opinion, but, thankfully, that crush is as unrequited as the one I used to have on River Phoenix. See, cuz, I had this poster of him playing the guitar that I used to smooch before bed. And I vividly remember reading Siddhartha in about the 7th grade because I'd heard he was named after a "character" in that book. Siddhartha in the 7th grade can really change your life, by the way. I think I've been pretty perpetually confused ever since, as a matter of fact. But despite all these displays of absolute dedication, nary a phone call from the Phoenix household ever came my way. And now it's too late and he's gone and I'm just here all alone with my folded-up poster stashed in a box in the basement. It's sad, really. Quite sad. But, uh. . .

And, choo-choo! Once again Meg has derailed her write-up. Hello, Tangential Central, can I help you?

Where were we? I mean before we were so RUDELY interrupted. Rightie-o, crush on Sara. Now, the reason that's a good thing is not just that Sara is extremely unlikely to requite the romance, thus leaving room for that walk-on role with kissing scene I so deserve, but that it makes him -- what? Yes, that's right! An instant underdog! Gotta love those shy, determined-yet-denied types.

And then there's the fact that he can take a Q-tip with some dried spit on it and use it to save the day. Hmmm, a man who can do so much with so little -- where have we seen that before? Could it be. . . MACGYVER?

Now for a little biography on Eric (and sadly, I mean a VERY little -- where are all the fan sites on this guy? Am I supposed to actually WORK for my information??): Eric was born on July 24th in Wisconsin. No idea what year, so let's guess and say it was around 1972. After graduating from high school, where he had developed a love for the theater, he went on to Carroll College (also in Wisconsin), participating in a variety of productions in his theater arts program. Soon after, he moved to California, where he attended and graduated from the American Academy of Dramatic Arts in Pasadena. He was active in local theater for quite some time before nabbing his first major TV role, on the 1998 series "The Net."

Since then, Eric's been in 3 movies (never heard of any of them). He's also had some guest roles in other television series like "Zoe, Duncan, Jack & Jane" (ex-Boyfriend Michael Rosenbaum's old show), and the Lifetime drama "The Division." CSI first aired in 2000, and according to what I've read, the role of Greg was intended to stay pretty small and behind-the-scenes. Eric turned the character into such a big messy-haired ball o' fun, though, that the producers have since expanded his role, guaranteeing that he'll be stickin' around for quite some time.

I love it when producers are smart like that, don't you?

So, if I've said it once, I've said it a thousand times (and actually, I think I probably really HAVE said it a thousand times): watch C.S.I. You're going to love it. And if you don't, well, never fear -- I only have just the one CSI Boyfriend left in the series and then you'll never have to hear about the darn show again. At least, not until next season, when CSI: Miami starts up! Woo hoo!