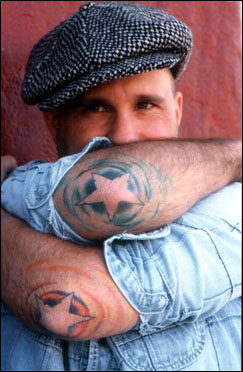 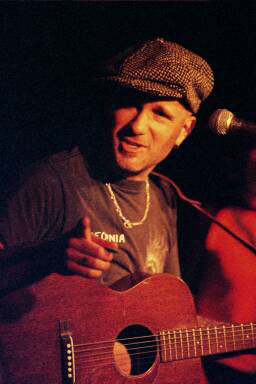 Here's one that ought to please a few of you -- finally Meg gets around to featuring another musician! After months and months and months of incessant vacuous actor features! All hail the mighty guitar player!

Unfortunately for you guys, Gary Jules isn't all that well known. Not that I'd actually know that myself, given how little attention I pay towards the modern music scene (outside of my own city walls, that is -- big fan of local punk and rock stuff). But as far as I know, and given the fact it's hard to track down his CDs, Gary isn't churning out MTV videos and hosting any music award shows yet. In fact, it looks like his biggest claim to fame so far has been his remake of a "Tears for Fears" song that wasn't all that popular back when those guys were singing it.

That song, though, is what brought Gary to my attention. First, when it appeared in the excellent film "Donnie Darko" (starring ex-Boyfriend Jake Gyllenhaal) and then again, most recently, when it ran during the last five minutes of an episode of "Third Watch" on television. The song is "Mad World" and Gary Jules's remake of it is absolutely wonderful. He took an 80's pop song and turned it into one of the most haunting ballads I've heard in a long time. For a sample of the song, click here (the sample is coming from Gary's web site -- it's not coming from me acting like Napster or anything like that).

So, anyway, when it showed up on "Third Watch," it reminded me that I'd been meaning to look that guy up. So, I finally did. And while I was at it, I also picked up a copy of his latest CD, "Trading Snakeoil for Wolftickets." And, like the song "Mad World,", which is on the CD, the rest of the album is the same kind of thing -- folksy guitar music with that seductive, sedative deep Gary Jules voice hovering over each measure like a cloud of poison gas wafting over your head, making you very, very sleepy.

Oh wait, that's probably not the greatest metaphor to use during this day and age. Scratch that. It's more like. . .well, you know that feeling you get when you are kind of drowsy and someone starts playing gently with your hair? It's like that. And, speaking of clouds of poison gas, germ warfare, and Saddam Hussein (well, okay, so I wasn't really talking about Saddam Hussein), isn't something like that exactly what you need right now? I swear, I put down the paper every morning and think, "If only someone would play with my hair right now, it would really make me feel a lot less freaked out about the people in charge of my country."

And voila! The next thing I know, I'm listening to Gary Jules and I've forgotten all about. . .wait, what was I just saying? Hah, see? I love it when a plan comes together.

Plus, BONUS! He's GORGEOUS! Though it's kind of hard to tell from the pictures up there. He's clearly also very shy and does not like posing for photographs. This is something we will have to work on, if only for the sake of my web site, but it's also kind of endearing in a frustrating sort of way. I mean, shyness is cute. It's just that shyness makes it so hard for me to find good pictures to drool over. It's cute, but it's counter-productive here at the Boyfriend site.

Like I'm one to talk, though. Usually when someone takes a picture of me, I mug for the camera so as to avoid having to really LOOK at myself in the photo later. Don't believe me? Check out this example (and yes, my face really DID freeze that way. Oh wait, that joke doesn't work anymore now that those pictures are up on the FAQ, huh? Nevermind that.)

Drowsy, someone playing gently with my hair. Gary Jules singing "Mad World" into my ear. Seriously, a recipe for absolute success. I predict, as a matter of fact, that Gary Jules will be the Next Big Thing. And I'm not the only one, either. Zeke Piestrup of VH-1's "Fresh Pick of the Week" said Gary Jules was "the best American singer-songwriter to emerge out of the late '90's -- and the only one worthy of being mentioned in the same sentence with Paul Simon, James Taylor, Cat Stevens, and Nick Drake." Nick Drake! How cool is that? (Cat Stevens I can take or leave, though.)

At present, the easiest way to get a Gary Jules fix is to order his CDs off his web site (see links section below) or to live in New York City, where he plays at the Fez Under Time Cafe every Tuesday. And, of course, you can always rent "Donnie Darko" (the DVD has a video for the song in the extras section, but I haven't seen it yet), wait for "Third Watch" to go into reruns, or catch the song on some other show. I've heard it was in an ep of "Smallville" as well, for example (although, warning, Gary -- if you let every television show play your song, it will quickly turn into the "Who Let the Dogs Out" of 2003. Please be careful. For me. Thanks.)

Seek it out. Ye shall find that Gary Jules is well worth both your time and your thirteen dollars. And if anybody DOES live in New York, I wouldn't say no to an autograph. You know, or a date. Heck, I'd settle for a tip of the hat. Is that so much to ask?