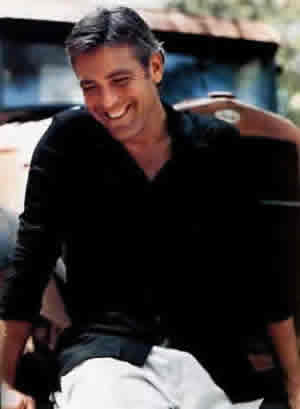 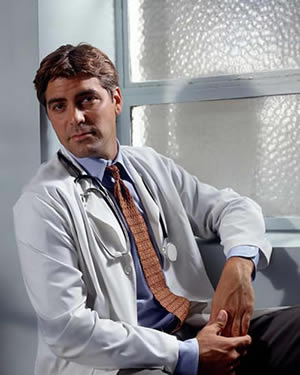 Confidential to the two ladies who emailed me about three weeks ago to complain that all the Boyfriends of late have been old, bald, ugly, or all three: YA HAPPY NOW? And, incidentally, I told Michael Chiklis what you said. He'll be over on Saturday to break your kneecaps.

Is just plain ol' goddamn gorgeous -- check. And please, forgive the swearing -- I really do try to keep this site pretty clean. But, by golly, if anyone fits the description "goddamn gorgeous," it's George Clooney. And "gol darn" or "gosh dang" just isn't going to swing it. The man is gorgeous. GodDAMN gorgeous. Sometimes, swearing is inappropriate. Sometimes, it is not.

Now, to be honest, I actually tried for many years not to like George. He's so cocky, you know? It just made me WANT to find fault with him. When he left me -- oops, I mean, "left the show 'ER'" -- I remember feeling kind of snotty about it. He left me (I mean "ER") so he could make movies, after all, and how often does that actually ever work out? Television actors do that all the dang time and then just end up flopping around in bad sci-fi movies (have you seen "Dark Descent" with Dean Cain yet?) for ten years before they finally throw in the towel and sign back up for a TV series.

I think I may have even rolled my eyes at George as he walked out my front door (I mean, off the set of his last "ER" episode) that fatefull Thursday night. Yeah, right, you JERK. Like you have a hope in heck. Like you'll go ANYWHERE without ME.

Unfortunately for my Ego, and fortunately for my Id (who knows how my Super Id feels these days?), George can actually act. He proved it to me first in "Out of Sight" and "The Thin Red Line." Then he did it again with "Three Kings," "O Brother, Where Art Thou?" and "The Perfect Storm." And then, as if that weren't torture enough, he walloped me last year with "Ocean's Eleven."

Funny, that. I mean, what IS it about George that makes us highly (I repeat, HIGHLY) intelligent chicks totally lose our cool? I take one look at him with stubbly cheeks and that big dopey grin and suddenly my IQ drops at least 40 points.

Another reason why I'm frustrated with our relationship.

But whatever it is, he's sure got it and he's sure givin' it to me every chance he gets. And, thankfully, I'm not alone, which means his future in the film world is virtually guaranteed. I may not have to wait ten years for his third "ER" show to come along after all (you guys know that he's been on TWO shows called "ER," right? The first was a comedy with Elliot Gould, actually called "E/R," back in the 1980's).

A little biographical information: George Timothy Clooney was born May 6, 1961 in Lexington, Kentucky to Nick and Nina Clooney. From a very young age, he got involved in acting -- Nick Clooney was a journalist and TV personality in Cincinnati and often took George along with him to publicity functions. Though not always happy about this, he learned quickly how to fake it for the camera and was soon a complete natural on-screen.

His first love, however, wasn't acting, though. It was baseball. He was the star player for his high school team and fully intended to hit the majors as soon as he could. Sounds like ego, but ego or not, he was good enough to land a tryout with the Cincinnati Reds. Unfortunately, he wasn't good enough to land a spot on the roster. A brief stint at Northern Kentucky University convinced George he wasn't cut out for the books either. So, he began to consider following his father into broadcasting. But before he got too carried away with that idea, his uncle, actor Jose Ferrer, came to town to make a movie about horse racing. George asked to be involved and was given a small role. That was all it took to convince him that what he wanted to do with his life was act.

His father didn't really approve, knowing how hard it could be to break into that field. But George would not be talked down. He packed his stuff up and moved West to LA with $300 in his pocket and the address of his aunt Rosemary's house in Hollywood. Though she wasn't too keen on the idea, he moved in and started to help out with her musical tours as he worked on the side at auditions and acting classes. Though the first year or so was incredibly rough -- rejection after rejection (if you can believe it!) -- he eventually managed to land some small TV parts and pretty soon was getting steady work.

It wasn't until Doug Ross came along that George Clooney became a household name, however. This success was what George needed in order to start delving into film and he began to make movies during "ER's" off-season. By the time he was ready to leave TV, he had a big enough body of successful film work to carry him through the transition. With last year's "Ocean's Eleven," George is virtually guaranteed a lifetime of fame. He was not only his usual gorgeous sassy self, but he also demonstrated that he can play VERY well with others. The way he and ex-Boyfriend Brad Pitt bounced so cleanly off each other during that film reminded me very much of that other great dramady team Paul Newman and Robert Redford (think "The Sting" and "Butch Cassidy and the Sundance Kid"). What can I say? That man is GOOD.

Coming up next for Georgey Boy is a starring role in Steven Soderbergh's next movie, "Solaris," based on the sci-fi novel by Stanislaw Lem (and not based, we pray, on the three hour Russian film). He'll follow that one up with "Confessions of a Dangerous Mind," a project that had been through many incarnations before his involvement but which seems to be virtually guaranteed success now that George is not only starring in it but directing it as well. Then, in 2003, we'll see him in the next Coen brothers movie, "Intolerable Cruelty," about a revenge-seeking gold digger who marries a Beverly Hills lawyer with the intention of making a killing in the divorce.

Oh, and perhaps most importantly, we'll also be able to see George in a TV show called "Shirtless: Hollywood's Sexiest Men." I bet THAT got your attention!

In the meantime, of course, there are always those daily reruns of "ER" on TNT (in the mornings, usually). You can still get your Doug Ross fix from time to time if you're willing to work at it. And, really, in my opinion, any amount of work is worth the payoff if the payoff looks like THAT when he smiles. George, babe, I officially forgive you for leaving me ("ER"). And I'll be waiting for you should you ever have the urge to return.