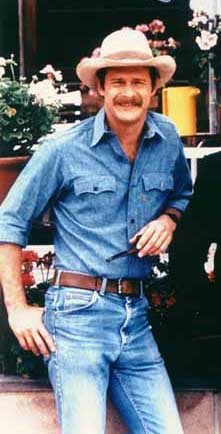 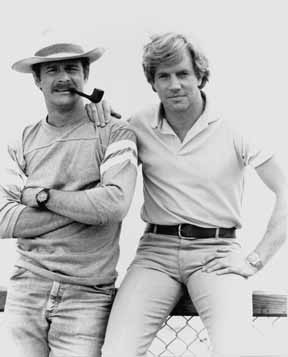 As I'm sure some of you are aware, I usually get up about an hour before I have to leave for work in the morning so I can spend quality time with my cat. For awhile, Lucky and I were spending that hour getting ready for work, playing, and watching "Little House on the Prairie" together, but after about six months of the Ingalls and their shenanagans, we grew tired of life on the prairie. So, together we perused the TV guide. I went down the column for 6am, reading aloud each program to Lucky. "The morning news?" I asked. No response. "Zooboomafoo?" No response. "Denise Austin's Sit and Be Fit?" Yawn. When I finally got to "Simon & Simon," Lucky's little head tilted a little and she looked at me as if to say, "Whazzat?" I said, "I think it's about private investigators." She said, "Mrrrrrow!" (Which, loosely translated, means: "Hit it.") And so, we decided we give the Simon brothers a try.

"Simon & Simon" was on during the 80's (ran for eight years, as a matter of fact), but I never watched it during it's original running. In fact, I'd never actually watched it at all until about two weeks ago, when Lucky and I started to tune in. After one episode we agreed on at least one thing, though -- Gerald McRaney has GOT to be made a Boyfriend. Okay, wait, we agreed on TWO things -- GM = Boyfriend and WE LOVE SIMON & SIMON.

Of course, I knew who Gerald McRaney was loooong before becoming a Simon & Simon fan. Because many years ago he starred in another tv show, "Major Dad," that was about a Marine Corps officer and his family. Having a Marine Corps officer as a dad myself, I could definitely relate to the show and it quickly became one of my favorites for the three years it was on. And I'm telling you this right now -- if you thought Gerald looked good in that cowboy hat on Simon & Simon, you should've seen him in his dress blues on Major Dad (in fact, you CAN see him in his dress blues down below -- be patient and you'll get to it).

What I like about Gerald McRaney (and I like it so well I've even watched a few episodes of that show "Promised Land," despite the fact it's cheeeee-ZEE!) is that he's:

A. Southern (accents suck me in) (you knew that already)
B. Cute as the dickens
C. Funny as heck
and D. A good guy

Actually, I don't know if he's a good guy or not. But I do know he spent the majority of his early career playing bad guys (trivia: he was the last guest star to meet Matt Dillon in a gunfight on "Gunsmoke" -- no, not THAT Matt Dillon, the OTHER Matt Dillon) (for those of you who are the wrong age to understand that, there's a Matt Dillon from our generation many of us used to drool over, especially right around 1983 when "The Outsiders" came out). After Gerald's stint as the sweetie Rick Simon, though, he pretty much stayed a good guy in everything he ever made after that (a few more tv series, lots of guest roles (including one on Diagnosis Murder, by the way), and about a zillion made-for-tv movies). It's hard to be typecast as a good guy if you're actually a jerk in real life, so I think it's safe to assume Gerald's a sweetie-pie in both realms.

Here's a little background information for you: Gerald was born in 1948 in Collins, Mississippi. He was a football player in high school but hurt his knee during a game. Instead of sitting around wallowing in an ex-athlete funk, though, he decided to check out the drama club instead. Obviously, he quickly discovered acting was where it was at, and he's never turned back. Wahoo! When he first started out, Gerald mostly played bit parts while he supported himself by working in the Louisiana oil fields. He joined the New Orleans Repertory right about then as well and did a little stage work with them (well, I don't know that for a fact, but one would assume if one joined a repertory, one would be involved in stage work). In 1971, Gerald moved to Los Angeles just like you're supposed to if you want to make it big. He drove a cab while he studied acting and about 9 years and 80 bazillion minor appearances in television shows and small films later, he landed the role of Rick Simon. In 1981, "Simon & Simon" debuted on CBS and was a huge success.

The good news is: his career took off. The bad news is: he got married. And it gets even worse -- his wife is Delta Burke! Now, granted, she's sweet and cute and has her own line of real-woman-sized clothing. Admirable. But she's always driven me completely nuts. There's something about HER accent that is like cat claws on glass to me. But then, I always preferred Rhett over Scarlet too. For the same reason. By the way, Gerald's got three kids from previous marriages and I read somewhere that one of his sons is deaf. No kids with Delta, though, so ya gotta wonder -- what's REALLY holding those two together? Uh huh, you know exACTly where I'm going with this.

Oops, there's actually more bad news -- I see here that the most recent thing Gerald has done is that John Denver tv movie starring Chad Lowe. Remember it from six months or so ago? I didn't watch it but I heard it was absolutely gaaaawd-awful! Now, I have nothing against John Denver, per se, but I really think his only television appearances (real or impersonated) should be on the Muppets. No movies, no 60 Minutes interviews, no nuthin' else. To be honest, that the flick was a flop didn't surprise me one bit. I've never been a big Chad Lowe fan (though he was smart enough to marry Hilary Swank). Anyway, this is bad news not only because it means Gerald's last outing was a dud but also because there don't appear to be any future works in progress. What if that was it for Gerald McRaney? What if we never see him again? Hey, wait! Isn't it time for another Simon & Simon reunion movie? Ohpleaseohpleaseohplease!

Anyway, despite the fact he's not out doing much at the moment, ultimately the good news wins out because you can still catch him daily on A&E -- that savior of great old tv mystery series. In fact, I'm watching an episode right this very minute. Ah, Rick and AJ. *Sigh* Let me count the ways. . . Mrrrrrrow!