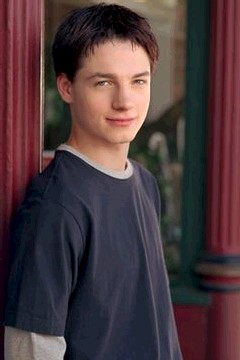 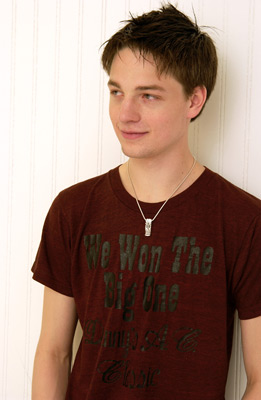 Okay, I was actually pretty slow on the draw for this one, everybody, I admit it. The first couple of times I watched the WB's new drama "Everwood" starring ex-Boyfriend Treat Williams, I wasn't all that impressed. In fact, I quit watching after the series premiere. It just looked too cheesy. Too hokey. Too overdone. Too cliché. Too icky. Too schmoopy.

And once I stopped fighting it, you'll never guess what happened. I totally became hooked. And holy heckfire, people! This is actually a pretty great li'l show! (I say "li'l show" because that sounds kind of countrified and quaint and I figure Everwood residents will appreciate that sort of tone.)

But it's turned out that it's not actually Treat Williams who is keeping me glued to my set every Sunday at 6pm anymore. I mean, sure, a little Treat Williams is never a bad thing, and a lot of Treat Williams, and with facial hair ta boot, is actually a very GOOD thing. But even better than Grizzly Williams is the kid who plays his son on the show, this week's Boyfriend Gregory Smith.

Before any of you start to freak out, grab your phones, and get ready to call 1-800-REPORT-A-PEDOPHILE, let me just state up front right now that Gregory only PLAYS a high school kid on the show. In real life, he was born in 1983, which makes him almost 20. Whew. No jail time this week for the Megster.

Now that we've gotten that out of the way, let me take five to tell you what the show is about, in case you haven't yet given it the time of day (despite the fact the only time of day you actually have to give it is Sunday nights at 6pm and you can't convince me you truly have something better to do then, because I won't believe a word you say, so just stop it right there, you). Ahem. Okay, Treat plays Dr. Andy Brown, a rich neurologist who used to be so obsessed with his career that he barely saw his family. Several months prior to the start of the show, Andy's wife died. And the sudden loss of his faithful companion really threw the ol' doc for a loop. He realized he'd missed out on so much of her -- and that his kids had essentially grown up without him -- and he just couldn't believe how deluded he'd been for so long. So, he packed up his two children, Delia and Ephram (played by Gregory) and moved them to a tiny town far away from the frenetic pace of the city. A town where they could all slow down and concentrate on being a family. And that town, duh, was Everwood, Colorado.

He bought them a gorgeous house in Everwood, ushered Delia and Ephram into the new school system, and, since he already had more money than he had a use for, decided to open a free clinic in town. That way, he was thinking, he could set his own hours, keep practicing medicine, help the community, and let go of his obsession with all things financial once and for all.

And actually, therein lies an element to the story that has kind of bothered me all along, though I've recently stopped harping on it and just decided to go with the flow. See, he opened his free clinic up across the street from the longtime town physician -- a good man who had been serving the community for years and who had charged for those services essentially so he could feed and house his own family. A good man who went to medical school to become a family doctor and practice in a small town. With no aspirations towards wealth or prestige.

And he was happy and successful in his own small way. Until Dr. Goody-Two-Shoes showed up and put him out of business by hanging out his own shingle and advertising his new low, low prices.

Dr. Brown is sort of the Wal-Mart of the medical profession, if you think about it. And what's worse is that the other doctor guy (Dr. Abbott) is sort of harassed and picked on because he's had the gall to be a bit upset about Dr. Wal-Mart's takeover of the entire town. That sort of bothers me. Because I think Dr. Abbott has a legitimate complaint here. Not that free clinics are bad. But, like, how is Dr. Abbott supposed to earn a living now?

Anyway, apparently, we're just supposed to ignore that aspect of the plot and concentrate on how stuck-up Dr. Abbott actually is and how sweet and fluffy Dr. Brown is in return. So, let's just stick to the party line from now on and pretend we don't mind.

Because, really, the show isn't about the two doctors' relationship anyway. It's about Dr. Brown's relationship with his kids, one of whom is making an effort to reconnect with him (Delia) and one of whom is incredibly pissed off (Ephram). And while we're dishing out descriptors, let's also state for the record that one of them is also incredibly cute (Ephram) and remarkably talented (Gregory).

Granted, Gregory's primary facial expression on the show is a scowl. But he does scowling very, very well. And what's far more important are the non-scowl scenes. Like the scenes when he's being funny and he knows it. Or the scenes when he's scared. Or the scenes when he's madly in love with Amy and he knows he just doesn't really have a chance (yet). Yes, that's right, I DID just say "underdog." Because I haven't seen a Boy so full of twisted pain from unrequited love since the time Buffy slammed the door right in Spike's face on "Buffy the Vampire Slayer." And I'll tell you one thing, readers, when I see a Boy with an expression like that, it just KILLS me (in a really good way, of course) (I mean, in a really good FIGURATIVE way, of course -- I'm not actually dead as I write this. Though I'm sure I could've fooled a few of you, har dee har har.).

Okay, so, you've never seen Everwood and you don't feel like starting now. But you swear to Pete that you've seen that Gregory guy somewhere else. Wondering where? There are a few possibilities, only two of which I've seen myself. So, let's start with those two. The first was a series that was on for a short time last year and starred one of my all-time strongest girlcrush subjects, Mary Stuart Masterson. The show was called "Kate Brasher" and it was on for about 3 months or so, maybe Saturday nights? Kate was a social worker working for Hector Elizondo and Gregory was her smart-aleck, but totally cool son Daniel.

That rang no bells? Then possibly you saw him in the movie "American Outlaws," starring future Boyfriend Colin Farrell (and ladies, when I say "future Boyfriend" this time, I mean, "tune in next week" -- hint, hint). Colin played Jesse James, the train robbing version of Robin Hood, and Gregory played Jim Younger, an off-and-on member of the James gang, who, and this isn't in the movie but it's my favorite piece of Jim Younger trivia, also worked for a time as a librarian. Okay, okay, so it was while he was in prison. But still. Books is books.

Anyway, "American Outlaws" is no "Tombstone" (okay, bring on the hate mail, Jesse James fans!), but it's still a pretty decent little Western.

Other films for Gregory (primarily kids' movies, by the way) include "Harriet the Spy" (1996), "Krippendorf's Tribe" (1998) and "Small Soldiers" (1998). And, oh wait, I missed one other one I've seen -- "The Patriot" with Mel Gibson. He played one of Mel's kids in that movie (alongside ex-Boyfriend Heath Ledger, by the way). And if you've never seen "The Patriot," tune in THIS Sunday night (2/2), because I believe I just saw an ad for it on cable. And anyway, it's a pretty entertaining movie starring many, many cute Boys.

But one of the best things about Gregory isn't his talent OR his looks (though both are mighty, mighty fine, with a capital FI-I-INE). Nope, even better is this: he's a dual citizen of both the U.S. and Canada! Is that not the greatest news you've had all day? It means I can be madly in love with him for being Canadian without having to argue with people that just because he isn't Made-In-The-USA doesn't mean I'm not patriotic. Because, I'm VERY patriotic. You guys know that. You heard me sing the Canadian National Anthem just a few weeks ago on this site, after all.

Oh wait, they probably meant patriotic about the US right? Nevermind. For the record, I'll be patriotic about the US again just as soon as we get a democrat in the White House. And until then, I will continue to consider a switch to Canada (see Boyfriend Links for more information on the switch), by golly. By gosh. By Gollum.

Gregory Edward Smith was born on July 6, 1983 in Toronto, Ontario. And yes, it does actually pain me to feature a Boyfriend born in the 1980's, but I'm managing anyway, thankyouverymuch. (In 1983, I was in the third grade, where I spent every recess learning the ins and outs of legalized gambling. With marbles. I was one of the best shooters in the sand pit, yessirree bub. However, also in 1983, Gregory was lying on his back in his play pen, wearing diapers and going "ga GA GA GA" a lot. I'm sure you understand why I might find this way of thinking about it a bit disturbing.)

He began acting at the age of six, though his first official gig was actually a Tide commercial when he was only 14 months old (cute!). He's the oldest of four kids in this family, and he spends a lot of his spare time hanging out with the other three (all of which hope to follow his footsteps into an acting career). He currently lives in LA, when he's not on location in Utah for "Everwood."

Just in case you think I'm the only person out there who think he rocks, let me also mention that Gregory was the recipient of the 1997 UNICEF Award at the Berlin Film Festival as well as the Young Artist Award for Best Leading Young Actor for his role in the film "My Teacher Ate My Homework." And he was recently honored by Movieline with the "One to Watch" award, something I totally agree with, because he is definitely well on his way to becoming the latest teenage heartthrob to rip through the pages of Seventeen.

Up next for the supremely talented and magnificently scowly Gregory Smith is a TV mini series version of Madeleine L'Engle's "A Wrinkle in Time" (also featuring ex-Boyfriend Kyle Secor). And, of course, more "Everwood," which was just recently given the go-ahead for a full season of episodes (yay!). So, hey, since you're not doing anything better at 6pm on Sunday, how's about tuning in? WB Network. You know, the one with all the cute guys on it?