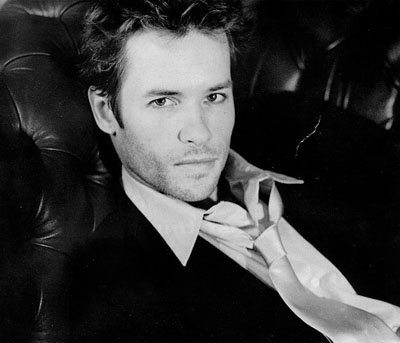 Last week, as I tried to come up with a good Boyfriend to run this week, I was really having a hard time getting inspired. I'd been thinking about Guy Pearce for awhile, but since I'd only seen him in "L.A. Confidential" and "Ravenous," neither of which features Guy in a very pretty light, I just couldn't get all that revved up about him. (Incidentally, I also saw "Priscilla, Queen of the Desert," but I don't remember him in that. Probably because when I saw it, I had no idea who he was and was too busy going "Is that actually TERRENCE STAMP in that dress?!")

One slow day last week, just for kicks, I decided to try looking for a few Guy Pearce photos, though. And once I started looking, HOLY COW did I realize I had my new Boyfriend. JUST LOOK AT THOSE PICTURES! Did you have any idea Ed Exley could look like that?

If you didn't, then it's because you, like me, were totally clueless. Any other decent Guy fan would've known that Guy's first big break was on a soap opera (called "Neighbors" and that rings a bell with me -- I have the feeling some other Boyfriend was on that show too. Anybody know which one?). They cast him pretty quickly after seeing him in the flesh. Know why? Because he was a teenage BODY BUILDER at the time. Yes, THAT Guy Pearce used to have muscles like Arnold Schwarzenegger. He's one of those over-achiever skinny guys who feels (or at least felt) the need to work out constantly in order to go from scrawny weakling to amazing muscle-stud just like Charles Atlas did on the backs of all those comic books.

Anyway, he was so dreamy from the neck down that they made his character on the show a diver so they could have him strut around the stage in a skimpy bathing suit a lot. Thus winning him about a zillion Australian fans (apparently this is an Aussie soap -- could the other Boyfriend have been Russell Crowe?) of the female persuasion.

Lucky for us stinky Americans, Guy quit the soap and moved into movies. But let's not get too ahead of ourselves here. Pause with me for a moment while we toss the image of a totally buff Guy Pearce in only a swimsuit around. Hmmmmmm.

Okay, *snap*. Back to Realitysville. As I mentioned earlier, I've seen only three Guy Pearce movies. The first was "L.A. Confidential," which I finally had to go out and buy (got a good deal on half.com, though) because I kept having to rent it for Boyfriend research (Russell Crowe, James Cromwell, Kevin Spacey, etc.). In LAC, Guy plays Ed Exley, the skinny twerp all the other cops hate because he's such a goody-goody, but who actually proves to the entire city that doing the right thing does not actually make you a wussy. Ed Exley is nerdy, pointy, and pale. And when you put him next to Russell Crowe, he also becomes short and funny-lookin'. So, the first few times I saw L.A. Confidential, he wasn't the hunk that caught my attention.

The next Guy Pearce movie I saw just amazed the pants outta me (huh?). It was called "Ravenous" and was about a bunch of soldiers eating each other. But that wasn't the amazing part! The amazing part was that I didn't recognize Guy until about 90 minutes into the movie when my real-life boyfriend turned to me and said, "Don't laugh, but doesn't that guy look like the dork in L.A. Confidential?" (He prefaced that with the "Don't laugh," because whenever we watch a movie and he recognizes someone as being a famous actor we've seen elsewhere, he is ALWAYS wrong. Like, "Hey, isn't that Jon Voight?" when it's actually someone unknown who, in my reality, looks NOTHING even REMOTELY like Jon Voight. Which makes me crack up.

This time, however, he was right. And it not only LOOKED like Guy Pearce, it WAS Guy Pearce. (Really, you guys, if you see it, you'll understand why I didn't recognize him. First of all, there's all that facial hair. Second, there's all that distracting people-eating.). It wasn't a god-awful movie, by the way. It definitely held my attention. But it's not for the gentle of spirit.

Anyway, the third movie of Guy's I've seen is "Priscilla," and it's obviously time to rent it again because I absolutely cannot picture Ed Exley in a dress and that's gotta be somethin' to see.

So, Meg, you ask. If you didn't find him attractive in L.A.C. and you didn't even recognize him in Ravenous, what the heck is he doing on your web page? I'll tell you. A few weeks ago, when I was doing James Cromwell (I should really rephrase that, but I'm not gonna), I watched LAC twice in one week. (Well, hey, the first time was for James and the second time was because I missed Russell Crowe and it didn't look like I was EVER going to get to see Gladiator.) The second time, though, who I really noticed was Guy Pearce. Ed Exley I had noticed all along. I liked Ed, to be honest. Nice guys impress me, especially guys who stick to their nice-ness guns even when it means they are going to have the bejesus (beheysoos) knocked out of them for it. But Guy Pearce is who I noticed this time. It was something about his mouth, actually. And his (brown?) eyes. And that amazingly perfect nose (really, a nose that perfect ought to be illegal). Holy St. Patrick, I cried. Underneath that Crisco hair-do and those terrible glasses lies a total and complete Hunkastudamuffin!

I believe I have never used that word to describe a single Boyfriend before. Not even MacGyver. (Mostly because I just made it up right here on the spot, but don't tell Guy that part.)

And thus a Boyfriend was born.

Well, okay, he was actually born thus: In Ely, Cambridgeshire (that's in England, for those of you who lost the Geography Bee) to a father who was in the Royal Air Force (but who was a native New Zealander, I believe) and a mother who was a really really great mom. Shortly thereafter (when GP was about 3.5 years old and it was 1971, which must mean he's only 5.5 years older than I am, which must mean we were made for each other), the family packed up and moved to Australia, where his dad became a test pilot.

Now, I read this on one web site and it immediately made me a little nervous. Test pilots do an awful lot of crashing and burning. It seems like a pretty poor career choice, actually, but what the heck do I know about danger? I'm a librarian! (Although you can easily get injured or killed in libraries -- especially if they keep the heavy books on the TOP of the tippy and unsteady shelves instead of the bottom.) But, that site had nothing more to add so I exhaled and continued looking for pictures the kids in the audience might describe as "hot." (Or even "hella hot.") (Don't ask me.) The second web site I went to, though, and the one with much more updated information (which makes me trust it), said my ouija-like prediction skills were right -- Guy's father died in a plane crash about 5 years after their Aussie move. Dang. Poor baby. That means his daddy died when he was about 9! How do kids ever survive that?

Incidentally, the fact he DID survive it is what leads me to believe his mom must've rocked. She decided to keep the fam in Australia instead of packing them up and taking them back home to England, and that was lucky for the rest of us, because who knows what would've happened to Guy Pearce if his life had turned out differently, right? Would he have ever made it to the big leagues? The Boyfriend of the Week big leagues?

This is a question that will puzzle us for generations to come.

Anyway, in case you doubted (however briefly) that Guy and I (it rhymes!) were a match made in Heaven, here's a little interesting Meg-Guy trivia: We actually have quite a bit in common. First of all, Guy loves music and plays the guitar, piano, and sax. I ALSO love music and I play the guitar, piano, and flute (which looks just LIKE a sax except it's about 1/12 the size, is straight instead of curved, is usually silver instead of bronze in color, makes sounds from a much higher register, and does not involve the use of reeds). Also, he is married to a woman named "Kate" and Kate is a often a nickname for Katherine, which just so happens to be my middle name. Can you believe it? But wait! The list goes on! It's said that Guy cherishes and protects his private life. Obviously this is true of me as well, otherwise I figure one of my Boyfriends would've come knocking on my door by now (they just don't know where to knock, s'all!). And, his dad was in the Air Force and my dad was a Marine. Which actually only means my dad can beat up his dad, but we won't go there with this one.

So, you see, obviously us getting together like this was DESTINY.

I haven't seen Guy's most recent film, "Rules of Engagement," but I seem to remember it got pretty good reviews. I think it's about a military officer on trial for ordering his troops to fire on civilians (in the Middle East, I think). Not a terrible original plot, I must say, but it didn't get bombed in the media, so it's worth renting when it shows up on video.

Investigation tells me Guy can quit his day job, too, as he's got at least three more movies coming out soon, all of which feature him in the lead role (or at least a co-starring role). The first is called "Memento" and is about a man (Guy) who, suffering from short-term memory loss, ingeniously solves his wife's murder. The second is called "Till Human Voices Wake Us" and is a ghost story (yay!). And the third is virtually guaranteed to rock -- it's "The Count of Monte Cristo" and features Guy in the role of Fernand (and Jim Caviezel as the Count).

So, not only is Guy not going anywhere (like, back to soap operas), he's also going to be all over the place in the next year. This makes me very very happy, especially now that I've realized he doesn't actually look like Ed Exley one bit (nor does he, I'm assuming, really eat human flesh). Plus, it's nice to have a Boyfriend who isn't really all over the news lately. I've recently found out a lot more about Russell Crowe than I ever wanted to know, for example.