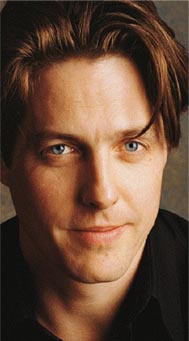 This week's Boyfriend is one I toyed with for awhile about a year ago and then ultimately sort of shoved onto a back burner. I liked him and all, but I didn't think he was anything that spectacular; then, I forgot all about him. However, last week I was reading an article in the June issue of Vanity Fair about Julia Roberts and I came across this quote (describing the first time he encountered Julia):

". . .I remember being so intimidated by the fact that she was in the room that I got myself in a sort of kerfuffle and missed the chair when I sat down. I sat on the arm of the chair, then had that very awkward inner debate about whether to say, 'Actually, I've missed the chair,' or to pretend that I was really a slightly quirky sort of character who always sits on the arm."

I can picture Hugh Grant doing this (accidentally sitting on the arm while "kerfuffled" and then saying with absolute poise, "Actually, I've missed the chair") and it's a picture that's pretty dang cute. Also, I can relate to the situation he described -- it's exactly the sort of thing I would do if ever in the presence of, say, MACGYVER, and it's precisely why I avoid seeking out the Boyfriends for real. However, it's nice to know that I could seek out Hugh and make an absolute arse of myself and have him understand exactly what I was going through.

In other words, it's nice to know he's human.

It's also nice to know he's witty. Julia mentions in the article that she was a bit intimidated by Hugh Grant when they were filming "Notting Hill" because he was so witty in a very British kind of way. When I think about Hugh Grant, who is not actually very handsome, I think of him as being the sort of fellow who started out a bit shy and insecure and then latched onto wit and word-play as a way to hide those two qualities. This is a response to insecurity that I heartily approve of, perhaps because it's exactly what I did when I got to high school. Kind of goes along with the old English class sentiment: If you can't dazzle them with brilliance, baffle them with bullshit. I am the master of this domain, and I suspect Hugh is right up there at the top with me.

Anyway, while I was working on this, I realized I haven't really seen all that many Hugh Grant movies. I guess he's not really an actor I actively seek out, though I'm always pleased to stumble across him. He wins mega-points, for example, for playing my favorite composer, Chopin, in the terrific film "Impromptu," but then he loses mega-points for "Nine Months" (which I didn't actually see, so I lose points myself for banning a book I haven't read, so to speak, but it just looked SO BAD. Painfully, agonizingly, horribly bad. Yeesh!). It all works out, I guess. I've heard "Notting Hill" is sweet, though, and while I have a realllllly low tolerance for Julia Roberts, I could probably stand it if Hugh were involved. He's got charm, that's what it is. What he lacks in the "stunning good looks" department, he more than makes up for in personality. I'm hip to that. Soooo hip.

MacGyver Factor Score: 88.7%. Well, I had to take SOME points off for the prostitution thing, right? I mean, whadda schmuckus. I gave him a few points back for being British, though. I just love the way Brits cuss. And the way they say things like "rather" and "gent" instead of "totally" and "dude." So dignified.

Click here to go to the IMDB page on H.G.