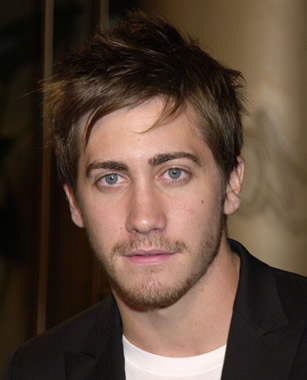 This week's Boyfriend is probably one a lot of you guys don't recognize. Though he's been acting since he was a kid (in fact, he was in "City Slickers," playing Billy Crystal's young son), he really hasn't been in all that many major motion pictures. You may have seen "October Sky," but you probably haven't seen "Donnie Darko." And I'm sort of counting on the fact you haven't seen "Bubble Boy," because I fear that if you have, you are probably sitting at your computer right now wondering if I've lost my mind. The guy from BUBBLE BOY?! Are you kidding me?!

Okay, okay, I probably shouldn't knock it, since I haven't actually seen it myself. And hey, maybe it's actually two hours of sheer comedic genius. Nevertheless, ladies, I know when to hold 'em, and I know when to fold 'em. And I'm folding when it comes to that one. You can work on me if you want to -- tell me how much you loved it. How it made you laugh. How it made you cry. How it made you love Jake Gyllenhaal forever. And it might even work. Anything's possible, I'm the first to admit that. However, you guys did that with "Moulin Rouge," if you'll remember, and it turned out badly for us all. Remember? Remember how you convinced me to rent it and then I hurt your feelings by reporting back that I thought it was unbearable? That was painful nastiness all around. You sure you want to go there again over a movie like "Bubble Boy"? Give it some thought. Let me know.

The good thing about us here at the Boyfriend web site, though, is that we don't hold bad movies against anybody. I mean, we've all made bad movies from time to time, right? I, as a matter of fact, was in a really bad movie called "Grease" that was filmed in a friend's basement one weekend when I was in about the ninth grade. I even played a guy, that's how bad it was. Me! A guy! As if! So,for the sake of the write-up and all our joy, let's move on away from "Bubbles" now and get to the good stuff instead.

I recently rented "Donnie Darko," having been curious about it for months. I'm not sure exactly what I expected from it, but I was pleasantly surprised by what it ended up being. The film is about Donnie Darko, a teenage boy with serious mental problems (played by our main man Jake, of course). For the most part, his wacky is fairly controlled. But when Donnie finds a new friend -- an imaginary bunny friend named Frank -- things start to go rapidly downhill. Because when it comes to imaginary bunny friends, Frank is no Harvey the Great Wh-Wh-White Rabbit. In fact, Frank is downright sinister. How Donnie attempts to cope with the twisted connection between his real life and his schizophrenic life forms the basic spine of the film, but there's a lot more to it than that. Though I wouldn't say it was the greatest movie of the year, I really liked "Donnie Darko" and it's one I'll probably rent again someday.

Jake, on the other hand, IS one of the best things I've seen all year. And just to prove that to myself, after "Donnie Darko," I got "October Sky" from the library. That's a great movie, a true story, about Homer Hickam, Jr. (played by Jake), a gifted high school student who decides what he wants to be when he grows up isn't a miner like his father, but a rocket scientist like the brainiacs over at NASA. Though he faces pressure against him in almost every direction (particularly from his father), he still manages knock the socks off his town with his smarts and his dreams. A wonderful movie from start to finish, and definitely one I'll be pulling out from time to time in the future, particularly for my nephew when he's old enough to appreciate the moral. And it's not just great because it's got solid writing and steady acting. It's great because Jake is not only cute (did you notice those gigantic deep blue eyes?), but he's got It. You know what It is, right? It's IT -- the thing that makes actors believable when they play pretend. The thing that makes their playing pretend better than OUR playing pretend. The It. And Jake's It is incredible. When he plays dark and disturbed, I believe dark and disturbed. And when he plays young and hopeful, I believe young and hopeful.

No word yet on what I believe when he plays ridiculous and immuno-deficient. But again, if you loved "Bubble Boy," let me know and I'll take it under advisement.

Yep, Jake's It is definitely what makes him hard to resist. Though the big BIG blue eyes don't hurt. No sirree. Not at all. Nope. Not one tiny bit of hurtin'.

Well, you know, unless you count the torture of seeing them over and over and not being able to grab the head attached to them and plant a smooch on its forehead. Or the fact that under those eyes is a set of ever-broadening shoulders and a slightly shy smile. And I can't do anything with those either. Yeah, actually, that kind of hurts. But I try to ignore that pain. You know, now that I'm married.

A little biography about Jakey: Jake Gyllenhaal (pronounced Jill-en-hall) was born on December 19, 1980 in California. His father, Stephen, is a director and his mother, Naomi Foner, is a screenwriter, so it probably didn't take either of them by surprise when both Jake and his sister Maggie turned to Hollywood for careers. Jake's first movie was in "City Slickers" when he was about 11 years old. Forbidden by his parents to take his next offered part, a role in the hockey comedy "The Mighty Ducks" (it was a two-month long shoot and he would've missed too much school), his next role was instead in the kids movie "Josh and S.A.M." which I still haven't seen.

Jake then went on to high school (a private school called Harvard-Westlake), continuing to act all the while (even appearing in two of his father's films, one scripted by his mom). But it wasn't really until he made "October Sky" at age 19 that the right people really started to pay attention. His performance was raved about, as was his highly watchable screen presence. From there, he went on to make the indie movie "Donnie Darko," which earned him an Independent Spirit Award nomination for best actor.

Currently, Jake can be seen in theaters in the movie "The Good Girl," with Jennifer Aniston, for which he is also receiving rave reviews. He was also recently in the movie "Lovely and Amazing," a comedy first screened at the 2001 Toronto Film Festival. This fall, Jake stars in the Touchstone film "Moonlight Mile," a movie set in New England in the early 1970's and telling the story of a young man who finds himself lingering in the home of his fiancée after her untimely death.

The good news is it looks like all three of those movies are going to garner incredibly supportive reviews and a fairly wide audience. And it's about time Jake started to get that kind of attention, in my opinion. He's not only almost unbearably cute, but he's one of the most talented actors born in the 1980's that I've come across so far in my long and courageous career as an official Boyfriend writer. And we all know how far THAT kind of publicity can get an actor these days. Whoa, Nellie! So, ladies, listen up. If you took one look at Jake's face and the first thing that came to mind was "Who's that," do me the greatest of favors and head to your local video rental store. Rent "Donnie Darko" and "October Sky." Head to the theater for "Good Girl" and "Lovely and Amazing." Then head back to the video store, rent "Josh and S.A.M." and stick it in the mail to me. Cuz I can't find it anywhere around here and it's driving me nuts. Thanks. You're true pals.