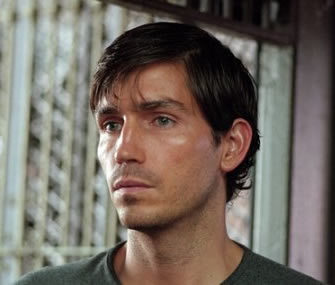 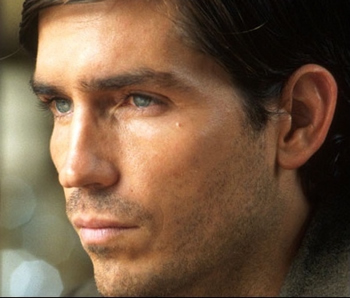 You know how there have been a lot of Boyfriends who have made me all swoony because they have that little bad side to them? That devious twinkle in their eyes? That bad cop attitude? They have that little bit of arrogance that makes you feel incredible for having been chosen, despite the fact you know they are just going to use you and then dump you? That heartbreaker thing? That agony? The kind of man you know your mother would hate, but which you cannot resist nonetheless? Ugh, ugh, the men that torture you, that you LET torture you, even though you are smart enough to know better?

Jim Caviezel is not one of those Boyfriends.

And I have to tell you, it's pretty damn refreshing. Because not only is Jim nearly always a good guy in the movies (even his bad guys have good reasons behind their bad choices), he's actually a good guy in real life. In fact, I'm almost tempted to describe him as "goody two-shoes," except that has such a negative connotation these days. But this, my friends, this is a man who refuses to do sex scenes in movies because he has so much "respect" for his wife. And because he's a devout Catholic raising his kids to believe that sex is something saved for marriage and he doesn't want to confuse them by saying one thing at home and doing another on film.

Let me repeat that just to make sure you truly understood: This is a man who RESPECTS HIS WIFE TOO MUCH TO BE WILLING TO LOOK AT ASHLEY JUDD'S BOOBS. Ladies, I'm married myself, and I'm also a heterosexual woman, and additionally, I feel like I have a pretty good moral compass. But even *I* would not turn down the chance to see Ashley Judd's boobs. Even I wouldn't be able to say no to that. Is that not just the sweetest little thang you've ever heard about a Boyfriend? I can't remember the last time I was so impressed (whilst at the same time so thoroughly convinced the man is nuts).

And, as if that alone were not enough to make me fall head over heels in unrequited love with Jim Caviezel, he had to go and be damn gorgeous to boot. Lord All Mighty, I am a cooked goose. I mean, just look at those blue eyes! Never have eyes so inspired such a great number of clichés. You could swim in them! They are as deep as the ocean! They are like windows to his soul! [Insert more unoriginal comments here.]

Oh, and it just gets worse from there, guys. He's extremely athletic, he's tall, he's broad-shouldered, he's got great hair, he's got unique facial features (not classically gorgeous like, say, Cary Grant is, but gorgeous in his own original way). And, morality and looks aside, he's one of the best actors of his generation (in my own completely biased opinion). I mean, I hate to say it because I'm sure he'd just roll his eyes and blush, but this man, THIS MAN. IS. PERFECT.

One of the other things I truly appreciate about Jim Caviezel is the fact that he hasn't made that many movies yet. Why is this a good thing in a Boy? Because it means I can rent just about everything he's made and watch it all in a weekend. Which I did. About two weekends ago. To assist me with the descriptions and you with the reading, I've decided to create a little chart for you about the films featured in my recent Caviezel Festievel:

Man, was that all you ever wanted to know and more? I could've just summed it up like this: I saw lots of his movies and they were all great and he is really cute and sweet and nice. But then I couldn't have gotten that stuff about Patrick Swayze in there, you see? There is indeed a method to my madness (or vice versa, I suppose). Anyway, if you want to acquaint yourself with Jim Caviezel, I highly suggest the movies I just listed for you. You might want to skip the 12 episodes of North and South, though, depending on the kind of time you have available these days (it greatly helps to get sick, by the way -- makes it easier to forgive yourself for being such a lame couch potato). Oh, Ory! You can rescue me from the evil clutches of Justin LaMont ANY TIME YOU WANNA. *Swoon*

Because this is getting so long, let me just offer a really quick biography about Jim and then get you on your way. James Patrick Caviezel (a great name, if I do say so myself) was born in Mount Vernon, Washington on September 26, 1968 (see how perfectly I have timed this? Method, madness, all that. Happy Birthday, Jim!). He grew up in a very tight-knit Catholic family and his religion has been important to him all his life. Initially, his dream was to become a basketball player. But an injury in high school, coupled with the awareness that while he was good, he wasn't great, led him to leave the courts and look around for his true calling. He decided to take a stab at acting and tricked casting agents for "My Own Private Idaho" into believing he was an Italian immigrant so he could land a small role in the film. He was successful and the film inspired him to apply to Julliard for more formal acting training.

However, before he could accept Julliard's offer of a scholarship, he scored another small part in the film "Wyatt Earp" (did I just call that a "film"? I take it back!). Julliard wouldn't let him back into school after his hiatus, but hey, who needs them anyway, right? Besides, everybody who knew Jim knew he was a gifted mimic with a solid heart. He made people laugh, was a hard worker who never quit, and had all the right priorities. Though times early on were tough (he did his fair share of waiting tables and being rejected for parts), when Sean Penn suggested to Terrence Malick that he take a look at Jim for a part in his new film "The Thin Red Line," Malick agreed, met with Jim, and was blown away. Jim ended up with a lead part in the movie, which definitely was the film that put him on the map, so to speak, in Hollywood.

Since then, Caviezel has been steadily filling up his resume with solid roles in decent films. But he's never let the fame go to his head. Instead, he's consistently let his values lead him when he makes choices, put his family first, and, dare I say it? "Tried to do good in a place full of bad." And for that, ya just gotta love and respect him. Well, for that, and also for his incredible good looks, masterful talents on-screen, and that soulful, soothing voice of his. His wife, a teacher from Roslyn, WA (where "Northern Exposure" was set), is one lucky, lucky lady.

For a great article on Jim Caviezel, including more biographical and personal details, check out the link below to the Seattle Times (where, coincidentally, another Jim I'm crazy about happens to work -- my spouse!). And if you can read that article, watch those movies, and STILL say you aren't madly in love with him, then, to be frank, YOU NEED THERAPY.