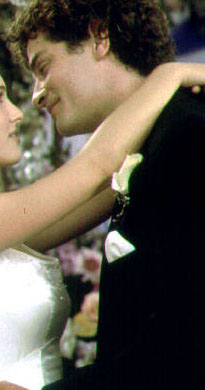 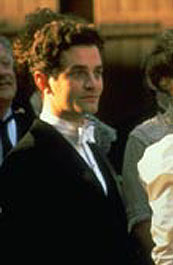 My golly, people. You would not BELIEVE how much work this week's Boyfriend write-up has been. There are (almost) literally no pictures on the web of James Frain and it was torture (TORTURE, I tell you!) to discover this, as he is quite possibly the hunkiest Englishman ever to cross these pages.

And yes, I am including Hugh Grant when I say that (gasp!).

Now, this is where you interject with, "Who the heck is James Frain??" Then I sock you playfully in the shoulder and say, "That guy in 'Hilary and Jackie,' silly!" And your sole response is a completely blank expression. "'Titus'?" I ask. Nothing. "'Elizabeth'?" Faint glimmer, then nothing. "'Where the Heart Is'?" Ahhhhh, you say. That movie that came out not too long ago starring the queen from the newest Star Wars movie. Right. Nod. So, which guy was he?

Lord A'Mighty, people. Put two and two together here! James played Forney -- the dark-n-curly haired librarian. Who else did you think I was going to fall for? The dopey country music singer? Puh-lease!

If you haven't seen any of the movies I've mentioned (or another mainstream one, "Reindeer Games" with Ben Affleck -- which I haven't seen myself), then I guess you're just along for the ride today. And that's okay cuz there's plenty of room and it's a beautiful morning. Hold on tight and you might even learn somethin'! Like, why you ought to start renting James Frain movies and get with the program!

Reason number two: And he's talented, too, though in all the movies I've seen him in so far, he's played the Deep and Thoughtful (D&T) type character. Forney was serious as a heart attack (cliche alert! ding ding ding!) and you just don't get anymore D&T than a concert conductor married to a raving lunatic (Hilary and Jackie). His character's personality in Titus ought to go without saying. EVERYBODY'S serious in that play.

A little biography (and I mean a VERY little): James was born in 1969 in Yorkshire, England.

See what I mean? There's just nothing out there on this guy! And what does this remind me of? Why, my friends, it reminds me of Heath Ledger. Because, when I wrote about HL many moons ago, I had a devil of a time finding out anything about him too. And not a month after my write-up, Heath Ledger became Public Heartthrob Number One. And yes, actually, I DO think there was a connection. I know I get a lot of teens at this site, because occasionally they email me and ask me if I'd consider featuring THEIR boyfriends on my site ("Because he is just sooooo hot!!!!!"). Any sentence ending with more than two exclamation points suggests a very young (and hence, excitable) writer. And if you have a lot of fourteen year old fans lusting after you (which they would've after my write-up of course -- who wouldn't after reading that bit about how he held Kate's hair back while she puked?), you are headed for the top. All it takes is one spread in Tiger Beat, and you've made it to the majors. Thus the connection.

And, therefore, I tell you now -- I predict that James Frain is going to explode into major motion picture status at any moment, usurping in one fell swoop (I love that expression) the positions currently held by Heath and our other favorite Aussie, Russell Crowe (and yes, I still like Russell Crowe even though he's dating Meg Ryan).

Further supporting this position (that James is on the verge of mega-stardom) is the fact he's got two very promising-sounding movies due out soon. One is Disney's "The Count of Monte Cristo," also featuring ex-Boyfriend Guy Pearce. The other is a movie called "Sunshine" starring Ralph Fiennes and Jennifer Ehle (who kissed ex-Boyfriend Colin Firth (once) and therefore rules my world). Actually, this film may have already been released -- I've just never heard of it.

Anyway, since the above photos SUCK (there are no good web sites on James Frain), get thee to a video store and start renting some of his movies! I command you!