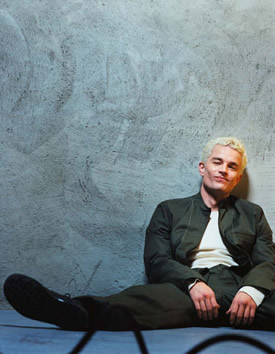 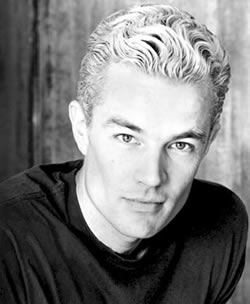 Well, you knew it would happen sooner or later, right? You guys told me a gazillion times that if I just gave him a chance, I'd start swooning over Spike on "Buffy the Vampire Slayer" just like you. And, turns out you were right, though not for the reason you thought, I bet. Just two weeks ago, I was telling you James Marsters didn't do anything for me. But then something on the show changed. No, his evilness didn't suddenly start to become attractive. No, I didn't stop thinking his slicked-back bleached-blond hair looked silly. No, I didn't even stop thinking it was really kind of rude to grab humans at random and suck their veins dry.

Instead, what happened was this: Spike became an underdog.

Well, heck, people! Why didn't you say so to begin with?! Knowing my penchant for people who just can't win, you should've known that would be enough to push me right over the edge. But be warned, what made Spike an underdog in my view wasn't that he got that painful chip in his head or that he gets stuck in a wheelchair for a bit. Nope, you don't become an underdog just because you can no longer do evil -- it's much harder than that. What made Spike attractive to me was, instead, the look of utter AGONY on his face when he confessed that he'd fallen in love with Buffy, and she slammed the door right in his face.

Unrequited love, sigh. It gets me every time.

Now, just like with Xander, I've learned enough about Buffy fans since becoming one myself to know better than to say ANYTHING about his history on the show. Or anything about the show in general, for that matter. Definitely not going to describe any episodes, talk about any character flaws Spike has (though, note: points off for being a blood sucking vampire), or even stipulate as to what the future seasons might hold. I don't have a masochistic bone in my body and I'm not setting myself up for an influx of rabid Buffy fan corrective emails. No way. No sirree. So, suffice it to say I think Spike is really cute when he's not trying to kill people. I like his eyebrow scar and accent and his extremely sarcastic wit. I like it when his hair gets messed up and his cheekbones, whew, are just unreal. Ooh, and his smile -- that devious twitchy thing is soooo sexy. Also, I like that he's complex. Nay, I truly appreciate that he's complex. The show is essentially about good versus evil, right? But who knew that battle would so often be fought within a single character? And no one is duking that battle out internally like Spike is. Even Buffy, who has toyed with the dark side a bit herself, hasn't had to get right down to it the way Spike has. Life is tricky for him. He doesn't know how to be, who to be, or even why to be. And that, my friends, is what makes him so damn attractive.

And while I was all set to deduct MAJOR points for his creation of Buffy-Bot 1.0 (if you've been watching the reruns on FX lately, you know what I'm talking about), I had to put all the points back after that one scene after he and Buffy-Bot have been making out and his hair is all ruffled. Ga ga. Ga ga ga ga ga! Love the hair when it's messy! Though, babe, Buffy-Bot was the very definition of "pathetic." If you're ever that hard up again for affection, give me a call!

Now, unfortunately, James Marsters hasn't really done much else besides play Spike. For kicks, I rented one of his few movies, "House on Haunted Hill," just to see what he was like when he wasn't playing a vampire. The bad news is, he only has a small role in the movie (though, actually, since the movie was really horrible, this could be construed as good news to some). His speaking parts are limited to "What the hell was that?" and "Oh God, we're all gonna die!" But he sure looked cute saying them. And he did "panicky cameraman" very well, I must say. His IMDB page shows that he's been in a few other smaller films, but they aren't the types you'll find at the local Blockbuster, so I may be out of luck until I find a video store specializing in obscurity.

The good news is, Buffy lives, Buffy rules, and Buffy isn't going anywhere any time soon. So, we'll at least get to hang out with Spike for the foreseeable future. Warning, though, I'm still only up to the part where Spike confesses his love for Buffy -- this is right before Buffy's mom dies, by the way, to put it in perspective for the die-hard fans. The first person to email me with ANY spoilers about the future is going to be VERY sorry. Comprende? If you know what's going to happen between Buffy and Spike, I don't want to hear about it! Am I making myself totally, completely, crystally clear? Good!

Now on to the biography, for which I'm sure I will receive at least three dozen corrective emails for each singular factoid I present. Okay, I'm ready; bring it on. James Marsters was born on August 20th and he's one of those silly people who doesn't want anybody to actually know how old he is, so there's no reputable source out there stating which year ol' James came into this fine world. This is good news, though, because it means we can make him any age we want to. For myself, I would like to make him about 30. And therefore, he was born on August 20, 1971. QED.

He's originally from California -- born in Greenville and raised in Modesto (so, yes, that British accent of Spike's is just acting (brilliant! thank you.)). His father used to be a minister and his mother was a social worker. He graduated from Davis High School in Modesto and studied acting at Julliard and the American Conservatory Theatre. While doing regional theater in Chicago, he co-founded the New Mercury Theatre company, which moved to Seattle in 1990, in the hopes of finding more gigs. After using any available space they could find, they finally settled down in Pioneer Square. What ever happened to the theater, I don't know, but it doesn't appear to be there anymore. At least, it wasn't in the local yellow pages on Yahoo. Probably doesn't matter, since James packed up his stuff after only a short time there and moved on to Hollywood to seek a more solid salary.

After a series of small guest spots on various television shows (including "Northern Exposure" while he was up on the Pacific Northwest), he landed the role of Spike on "Buffy." Originally, the role was just supposed to be temporary, but luckily, most of the fans weren't as completely blind to his charms as I was and he ended up with a long-term contract, becoming a regular on the show in the fourth season.

In addition to acting, James is also a musician, and performs regularly at California nightclubs (oh, you crazy fans must LOVE that, seriously). He mostly does covers, according to what I read, but they're covers of the greats, including ex-Boyfriend Tom Waits, so I'm happy. When he's not singin' or biting people's necks, he does a lot of writing, works on his car, and takes long drives in the desert.

James is 5' 10" tall (that'll do) with blue eyes and a cool scar on his eyebrow that he got when he was mugged in Astoria, Queens, where he was working as a bartender for a time. Brass knuckles. Nasty. Incidentally, he bleaches his hair using a combination of hair bleach and Sweet N' Low. But really, he ought to quit doing it because it looks very silly. Then again, I color my hair too, so who am I to say what's silly? As for marital status, he's currently unwed and I didn't read anything about any girlfriends, but I'm not holding my breath. And neither should you. If you had a Buffy-Bot, would you really need anything else? Exactly.

Up next for James is more more MORE "Buffy the Vampire Slayer" and, unfortunately, that's about it. But, rest assured, once Buffy finally ends, he'll have more free time to spend making feature films. And I for one, can't wait. Sure, it's fun being able to see him twice a day on FX. But it would be even MORE fun to see him be 25 feet tall on a movie screen. Wouldn't you agree? And trust me, when James Marsters yells, "Oh God, we're all gonna die!" you really BELIEVE it. He's THAT good.

No wait! That was a joke! Gentle teasing! Don't email your venomous Buffy-fan hate-mail to me! And please, for the love'a Spike, take everything I said in this write-up with a grain of salt. Even that stuff I said about his hair. Cuz, James, babe, you're the best and I'm a fool. Should've known you were the one for me long, long ago. As soon as I saw your sweet little face when Buffy slammed the door in it, I thought, "Xander? Who's Xander?" and that was it for me for good. Keep up the good work, my man.