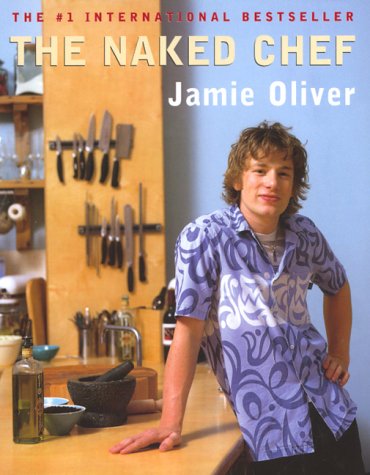 Even better than the Iron Chef, though, is the Naked Chef (or, as I call him, the Nekkid Chef), also known as Jamie Oliver. "Naked" doesn't refer to how he dresses (or doesn't dress, I suppose) when he's cooking, though I may have led you to that assumption when I dropped the word "porn" in up there, sorry. Nope, cooking while nekkid is just not something people who value their epidermal layers do. One pop from the hot skillet and you've potentially got third degree burns in very sensitive regions. So, no, Jamie Oliver is not THAT kind of chef.

For him, "naked" refers to his style of cooking -- simple, stripped-down recipes for tasty dishes. Dishes that are so flavorful and so gorgeous, you can hardly believe how next-to-naked those foods actually are. How simple. How plain. How easy! Because Jamie doesn't believe in saturating food with oils, sauces, gravies, dressings, and tons and tons of exotic spices. Instead, he tends to focus on one or two flavors, adding a few simple seasonings here and there to enhance, not mask, those core flavors.

Well, look, I'm lousy at explaining stuff like this. I think it would be easier for all of us if I just gave you a recipe of his that I really like so you can see for yourself just what I mean. So, while this is potentially a violation of copyright law (the lines are so fuzzy sometimes), here is my favorite "Naked Chef" recipe. This is, hands-down, the most delicious, simple, and quick meal I've ever made and BOY, does it turn out looking and tasting like a million bucks. Keep in mind, though, that part of Jamie's philosophy is improvisation. Don't like something in the recipe? Use something else! Don't have enough of something? Use something else! A recipe is a guideline, not a list of rules. Do what you want! And do it naked! (Oh wait, we already decided that WASN'T what Jamie was trying to tell us here. . .)

Blanch the green beans until tender (and bright green) in boiling, salted water. Put in a bowl with the cherry tomatoes and the olives. Toss in the olive oil and a pinch of sea salt and pepper.

Give the salmon filets a quick wash under the tap and pat dry with paper towels. Squeeze the juice of 1/2 a lemon over the filets, on both sides, then season both sides with salt and pepper and drizzle a little olive oil over the top. Preheat the oven and a roasting tray to 475-degrees Fahrenheit. Put your 4 filets of salmon at one end of the tray. Toss the basil into the green beans, olives, and tomatoes and place this mixture at the other end of the tray. Lay the anchovies over the green beans. Roast for 10 minutes, then remove from the oven and serve with lemon quarters.

(from "The Naked Chef" by Jamie Oliver)

You see what I mean? So simple! But just wait until you taste it -- gaaaaah, I'm getting hungry just thinking about it! Fish for dinner tonight!

Aside from his masterful culinary skills, though, Jamie does indeed have some other obviously attractive qualities. First, he's a Brit, which means he's got that knee-weakening accent I so enjoy, plus his speech is always slang-laden, which makes listening to him an extra challenge on many levels ("pukka tukka"? wha'?)

Second, he's got cute dimples and messy, bed-head hair (I can relate). And, possible the best part, you can tell he is having a REALLY good time when he's up there cookin'. Really. A blast. Completely.

A little background on Jamie: he grew up in a small village in north Essex, England called "Clavering." There, his parents ran a pub, so Jamie was living around wine and cooking pretty much from birth. When he was old enough, his dad put him to work, starting him at the bottom rung (dishwashing!) and eventually moving him up to food prep. By age 15, Jamie was already so skillful, he got a job at the Starr at Great Dunmow in Essex. There, the head chef was so impressed by his talents that he put Jamie in charge of his own section after only two weeks!

It was this freedom in the kitchen that truly inspired Jamie to pursue cooking as a career. He ended up at Westminster Catering College in London, which he loved, and eventually spent time cooking in France, where he says he really learned "that quality, real care, love, and individual flair have to go into every stage of food preparation."

Anyway, after cooking in a myriad of great restaurants, he realized how impossible it was to recreate most of his favorite dishes at home, where his kitchen was tiny, cramped, and lacking in many of the amenities he had gotten so used to in restaurant kitchens. This difficulty led him to attempt a stripping down of those dishes, which gradually resulted in the creation of a full repertoire of "simple, delicious, and feisty" recipes that, luckily, he eventually decided to share with the rest of us (hallelujah!).

While I'll admit that what first drew me to his show was the whole "naked" thing and what kept me watching after I saw he was clothed was the fact he was darn cute, what's kept me coming back week after week is the fact that I have learned something fascinating from every show -- cooking skills or ideas that I can actually use in my own tiny, cramped kitchen. Unlike some of the other shows on the Food Network, Jamie really focuses on things we can all make ourselves with a few simple supplies and the very basic of skills. His recipes are so easy and quick, I don't even really have to copy them down -- good news because it means I have more time to stare at his dimples and sigh the sighs of the lovesick. Ahhhhhh.

So, if you aren't watching "The Naked Chef," you are truly missing out. I mean, you work 40 or more hours a week, don't you? Either in the home or in the office? Couldn't you benefit from some healthy, whole food recipes that are a cinch to make? And, better yet, couldn't you benefit from an entire hour of watching a totally cute 20-something from England talk about food? Yeah, me too. So, tune in -- Tuesday nights at 7pm Eastern, 10pm Pacific. I swear to Pete, you will not be sorry. And while you're at it, pick up a copy of his cookbook ("The Naked Chef" by Jamie Oliver) and check out his totally hip web site as well (see link below). You're in for the time of your life!