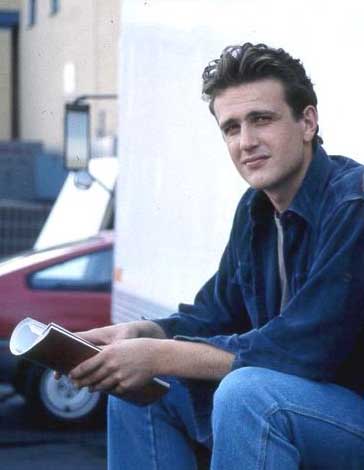 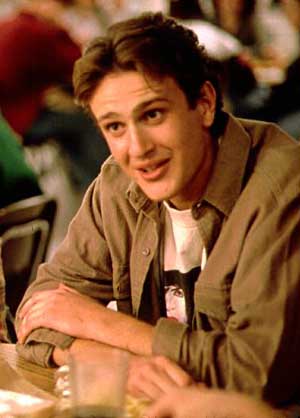 I selected this week's Boyfriend for two major reasons: First, he's cute and sweet and nice. Second, his show's been cancelled and you have one last chance to see it and I want you to know about it. Then I want you to rally to get the show back in action. Huzzah!

So, instead of presenting Jason Segel to you this week for your entertainment only, I'm also presenting him for selfish reasons. I want "Freaks and Geeks" brought back and I want it brought back NOW!

If you're like me two weeks ago, you have heard of the show "Freaks and Geeks" (from here on out referred to as F&G), you are intrigued by the show F&G, but you never got around to watching the show F&G while it was still on primetime. Most likely because it was nearly impossible to predict when it WOULD be on, since they never actually got it into a regular schedule.

When I found out it had been picked up by The Family Channel (ick poo), I was happy. I've read tons of stuff about F&G and it's supposed to be really great PLUS, they are showing it on Tuesday nights when there's absolutely nothing else on. So, two weeks ago, on Tuesday night, I sat down with my loyal assistant, Lucky the cat, and the two of us watched the first episode. It was so amazing that I could hardly believe it wasn't actually a film. It was the longest hour of television I've ever experienced, and I mean that in a very very good way. It was built like a film -- well-constructed and developed, with multiple side-plots that linked together and were carried out flawlessly. The acting was wonderful, the plotline was so true (based on my own experiences in high school -- I was Lindsay to the very last detail), and the characters just blew me away.

Not just because they seemed like real people (not like actors who play "real people" on tv), but because they were complex and hard to figure out (I keep waiting for Daniel to turn out to be a jerk and it keeps not happening -- I don't know what to expect from him). And, when I least suspected it, really really damn sweet. The last scene of the episode, the scene at the school dance, made me cry.

The second episode was just as good as the first. The main plot was about Lindsay throwing a keg party at her house the weekend her parents go out of town. Of course, as happens in every teenage kegger portrayed on television or in the movies, everything goes terribly, horribly wrong (with one marvelous exception -- her younger brother and his geeky friends switch the keg of beer with a keg of non-alcoholic beer instead. But everybody still gets trashed. Ah, the power of the mind. . .). Halfway through the show I stood up and announced to everyone who could hear me (cat, boyfriend) that if the party ended because Lindsay's parents came home early and discovered what she'd done, I would declare this episode to be a massive failure. Because that is what ALWAYS happens when this situation is featured in a tv show (or movie). Without fail. And it's so ridiculous -- parents don't really return from their vacations early. Why on earth would they give up time alone with no kids? I don't know any parents who would do that (note: I mean, parents of teenagers. Parents of infants do not count).

Happily, that is NOT how the party ends. Her parents never find out, to my knowledge. But other bad things happen to punnish Lindsay for her transgressions -- things far more realistic. Like catching Daniel (upon whom she has a serious crush) making out with another girl on her bed. That alone will teach her never to do this again as long as she lives.

But, I digress. The real point of this write-up isn't that F&G is amazing and wonderful, it's that one of its main characters, Freak Nick Andopolis, is amazing and wonderful. Well, okay, at least he's cute. Nick is another character I can't figure out. Does he have a crush on Lindsay or is he just usually that dweebily nice to everyone? Is he smart or is he a dunderhead? Is he really a Freak deep down? Etc. But boy oh boy, sometimes out of that crooked mouth comes some really great wisdom. Like when he took a depressed Lindsay to his garage to show her the love of his life -- his gigantic drum set -- and told her all she needed to feel better was to go out and find her OWN drum set. So, so true, Nick.

In case it isn't obvious by this point, Nick is played by actor Jason Segel, my Boyfriend this week. And the first time I saw him in F&G, I thought, "Gosh that guy looks familiar." It wasn't until I looked him up that I realized why -- he was in another movie I've seen in the last year, called "SLC Punk." SLC Punk is about a bunch of punks living in Salt Lake City. Yes, I said PUNKS in SALT LAKE CITY. That's the entire point of the movie, actually. It just don't fit. Jason played a character named "Mike" and while I can't be sure about this, I think he's the one who. . . oh wait, that would spoil the ending for you. Nevermind! Anyway, Mike has a lot in common with Nick, so it's hard to say just how talented Jason is. He may just be typecast as a goof. But that would be wonderful news because goofs are my absolute favorites.

A little background (perhaps useful in clarifying the goof question?): Jason was born on January 18th, 1979 (goof: almost born in 80's, non-goof: born same day as A.A.Milne). He says his major acting influences were James Dean (goof) and Robert De Niro (non-goof). He played basketball in high school and, in fact, his team won the California State Championship which is very non-goof, but he lives in Los Angeles, which is decidedly and without a doubt a very goof place to live.

Jason plays the piano (non-goof!) and is the middle kid of three (all I can say about this is, my sister (middle kid by five minutes -- we're twins) is the goofiest person I know. I can't swear it's a middle-kid thing, necessarily, but I tend to lean towards that direction here). He only very recently moved out of his parents' house (goooooof!). According to one site I read, which had a full astrological work-up of Jason, he is a Capricorn. The traits that characterize Capricorns actually make him sound like he might be a lot like me (goof). For example, he is anxious, traditional, and a perfectionist. Me to the T. He also gives good advice (oh, SO me!). However, there are some traits differ drastically from me and may, then, mean he has more non-goof than goof in him. Capricorns are also organized (hah), egotistical (moi?), fatalistic, and status-seeking. The only status I seek is that of Girlfriend. It's no kind of fame thing.

So, goof or non-goof? It's really kind of a toss-up don't you think? Especially if we use ME as the goof example against which all others are judged. Am I truly a goof or do I just think I am? Am I goofy all the time or only when picking out Boyfriends? See? It's a tricky situation. For now, however, let's just decide Jason is at the very least a near-goof and see what he does next before judging him further. Fortunately, it looks like he has a movie coming out (unless it already came out and I just missed it because I'm such a goo. . .nevermind) called "Slackers." NOT a remake of the "Slacker" movie of my generation, however (and thank god). Instead it supposedly has something to do with a bunch of geeks trying to woo the prettiest girl in school. My bet is that Jason is, if not chief-geek, then at least geek-second-in-command. And that tends to add more points to the goof wedge of our piechart, methinks. Happily.

G or NG, though, you have to admit two things: Jason Segel is very charming in a crooked-smile, silly expression kind of way. And if he's like his character on F&G, then he's also the champion of totally outrageous niceness. Oh, the second thing you have to admit is that Freaks and Geeks is a terrific television show (hence its cancellation) (my favorite shows are now being cancelled even before I've SEEN them -- this is an alarming trend). So, tune in Tuesday nights at 8pm on the Family Channel. One warning: you'll want to mute out the commercials so the "Family" cheese doesn't overwhelm your inner pizza (especially the ad for "The Elian Gonzalez Story" movie -- yuck!)

MacGyver Factor Score: 92.1%. MAJOR points off for declaring J. D. Salinger to be his favorite author of all time. He probably carries a well-worn copy of "The Catcher in the Rye" in his back pocket. I hate people like that. WAIT! Before you email me to tell me I'm a stupid meanie who obviously doesn't deserve that degree in English Literature, let me clarify my position. Yes, I think J.D. is a good writer. Yes, I think "Catcher" is a good book. But it should only be your favorite book while you're in high school. After that, the fake-angst-thing ought to wear off (high school kids are always drowning in fake-angst -- you don't get REAL angst until you hit college, kids, and by then you need a different book in your pocket). If Jason is still stuck in his fake-angst stage, I will have a hard time going on a date with him because I'll keep wanting to smack him. This report (that JD is JS's fav auth) has not been verified by the man himself, however, so let's not get too carried away here. A few points back because I'm making an idiot out of myself and should just shut up now please thank you.