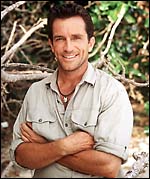 When I first heard about the show "Survivor," my gut reaction was one of major disdain. Most people who know me well know that my middle name is actually "How Could Someone Treat Another Human Being Like That?!" I say it all the time, consistenly shocked whenever I encounter anything from the slightest example of rudeness all the way down to outright cruelty. Heck, I get really mad when people boo baseball players, fer cryin' out loud. Don't they feel bad enough already when they've let a ball roll right between their legs? Lighten up, everybody! Be nice!

So, describe to me the game "Survivor," and I'll tell you the very premise disturbs me. A bunch of people working as hard as they can against each other. Lying, scheming, ratting-out, serving themselves and themselves only. Disgusting. Horrible. And definitely not for me. Nope. Noooooo way.

Thus, taking a position of righteous indignation ("fist in the air in the land of hypocrisy!"), I very deliberately and vocally skipped the premiere episode, ranting to my fiance that I just couldn't believe TV was now making plotting against others in the real world a hyped-up money-making machine. It's one thing when it's a soap opera or 90210. That's fantasy -- if you think you're supposed to take any real life lessons out of that, you're just too dumb to worry about. And not only that, but the nasty people on soaps and Zip Code always get the shaft in the end. But this, this was REALITY. It said so right in the introduction! A show glorifying real-life selfishness and deceit and rewarding the sneakiest trickster with a million smackeroos to boot! I can't believe we've sunk this low, people. It's just horrifying.

The next week rolled around, though, and my fiance was working late. So, under the guise of my other middle name, "Never Badmouth a Book You've Never Read," I allowed my morbid curiosity to take over and I tuned in. Of course, wearing a grimace of sheer disgust as I flipped the channel over to CBS. Heh, I said, now I'll have actual details to use when I slam this show in front of others. Yeee-es!

For those of you with weak memories, Episode 2 was the infamous bug-eating episode. Now, if there's one thing in this world that I hate more than meanness, it's INSECTS. Yet, at the same time, I am now willing to admit to you all that both mean people and bugs intrigue me in a spectacular-train-wreck kind of way. It's why I kept watching Zip Code even after they added the nasty Valerie to the cast. It's why I let a praying mantis sit on my hand at the science center's bug zoo. Horror is addictive. And if you combine viciousness, scorn, plotting, and BUGS, you will hook me, line and sinker. Completely against my will, of course. But nevertheless, when Gervase sucked down that bug without even chewing it, "Survivor" sunk it's stinky teeth into me and would not let go. Never missed a single episode after that one, and by the end of the third one, I was shouting at the television ("Richard, put on some pants! That's disgusting!") and getting up at every commercial break to run into the computer room and tell my fiance just what horrible, unbelievable things the cast was doing to each other THIS time. (Incidentally, he maintained his own righteous indignation the whole time, yet admitted to me last night that he was afraid to watch any of Season II, lest he be unable to stop once he started.)

Because, man, anyone could see I was a goner. I couldn't wait until Thursdays, so I could get to work and talk to my "Survivor"-watching pal about what had gone on the night before. I checked web sites all the time to see if anybody had heard anymore rumors about Gervase or Kelly. But the hook wasn't just from the fact the cast was so evil it was awe-inspiring. Or because the setting was so beautiful and cool (though the setting was a major part of why I kept tuning in, and it also explains why none of the other reality shows have hooked me -- I want bugs and snakes, people! Not umbrella cocktails and apartments!). Or even because the immunity challenges were so much fun to watch. It was all those things, definitely, but it was also the host, this week's Boyfriend Jeff Probst.

To be honest, I didn't really notice Jeff all that much until after the whole thing was over and I realized I missed him. Jeff is a great host -- he's made up of the perfect mixture of goofiness, sincerity, and rugged outdoorsy looks. And while he took a lot of heat during "Survivor I" for being the King of Cheesy monologue and gameshow-host grins, by the end of the season, I really liked him. If I were a Survivor, seeing Jeff would be very reassuring. He has a capable look about him (and it's not just because he's holding a torch of fire after you've just spent 12 straight hours rubbing two sticks together without so much as a spark). And even though he's occasionally quite rude (you know, Richard thanked everybody but him in the foreword to his book), he's always rude with just a little bit of irresistible charm. So, it's hard to hold it against him. Especially once you get The Grin flashed at you.

And then there's the other reason to love Jeff. His dimples. Oh man, those dimples just drive me crazy. They're adorable! And the best part is that they aren't just smile-induced -- they're long-lasting dimples. They're just a part of his cheek line. It goes cheek cheek dimple cheek cheek on both sides! Even when he's frowny instead of happy. I just can't get enough of that face, to be honest. In addition (I almost wrote, "In addiction" which would also be kind of a fitting way to put this), he's also got that great layer of I-Forgot-To-Shave-This-Morning stubble and that cute little L.L. Bean haircut. And boy, does Jeff Probst ever look good in khaki shorts, scrunched-down socks, and hiking boots. I really dig outfits that show off great calf muscles. In fact, it's what first attracted me to my fiance, to be honest (though he was wearing blue shorts, scrunched-down socks, and combat boots and has a decidedly non-L.L.Bean haircut). So, you put it all together, dimples, hair, stubble, grin, calves, and what you have is Jeff Probst on my web site as this week's Boyfriend. It's not so hard to imagine now, is it?

As I'm sure all of you know, season II of "Survivor" started last night, and the minute Jeff came on-screen for the first time, he got a little cheer from me. He looks exactly the same! How wonderful! And it definitely looks like "Survivor II" is going to be fun -- not only are there bugs and snakes this time, but alligators too! Bug and snakes and gators, oh my! I have absolutely no worries that this second attempt will fail, despite the reviews in the paper this morning that said it seemed too staged this time around. And, even though it seems like since everybody knows the secret to winning is being a total bastard, everybody is acting like total bastards from the get-go, there are still some sweeties in the cast to balance everything out (I particularly like the farmer guy whose daughter and son-in-law decorated his Bible with little love notes for him. He's got an adorable "aw-shucks" look about him.). And there's always smilin' Jeff to keep everybody in line. You gotta watch how you behave around Jeffy -- he'll call you on it at Tribal Counsel if you've been acting like a schmuck. I have to tell you guys, I am greatly looking forward to the next several weeks. So, please, do not attempt to call me at 8pm on Thursdays for the next few months. Unless your name is Jeff Probst, in which case you can call me whenever you wanna. Please.

Now, despite the fact Jeff is the glue holding the entire program together, there's pretty much zippo information about him out there. What I could find out was this: he was born in 1962 in Wichita, Kansas. Before becoming the host of "Survivor," he hosted a few game shows on the FX channel, as well as "Rock and Roll Jeopardy" on VH1. He's married to a psychotherapist, which is probably how he learned that "grin while asking a really personal question that is probably totally out of line" technique. That we all know and love. And, in between Survivor seasons, Jeff made a movie (he was both the writer and director) called "Finder's Fee," which stars James Earl Jones and is about a man who finds a wallet containing a winning lottery ticket worth about $6 million. Jeff describes it as "a morality tale" and adds that there was some juicy morality stuff towards the end of Survivor I that got adapted for inclusion in the screenplay. SOME juicy morality stuff? I'm not sure which show Jeffy was watching last summer, but the one I saw was ALL about juicy morality. Well, juicy immorality, anyway.

But that's interesting, isn't it? Who would've thunk that Jeff Probst was a writer-director in addition to being the guy who looks the healthiest and happiest out of the whole bunch whenever he walks on-screen? (Well, okay, right now some of the new cast members out-shine Jeff in the healthy-happy category -- but give them a few more weeks of eating bug-infested figs. That smile will come RIGHT off, I assure you. Along with a few pounds of that incredible washboard stomach muscle.) It only adds to the list of reasons why Jeff deserves to be my Boyfriend this week. This guy is talented. And extremely painfully almost illegally cute. And that, my friends, is how one spells B-O-Y-F-R-I-E-N-D on this web site.

So, make sure you tune in this Thursday. I may start a little companion web site page soon with my comments about Survivor II each week. If I end up having something more interesting to say this time than, "Gawd, that Richard really is a jerk, isn't he?" that is. Heh, who are you kidding? You guys don't care if it's interesting! You'll read anything! Case in point: if you can read this, you are too indiscriminate. Get back to work!