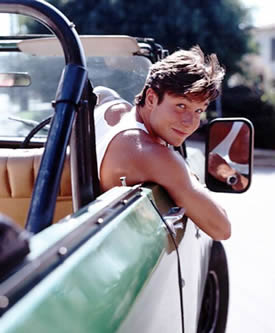 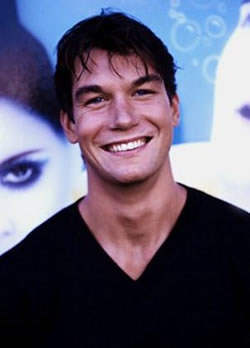 Well, okay, so I made you wait a full 24 hours for the Boyfriend this week. And I also said that said wait would be well WELL worth your time. But I probably should've added a caveat -- you might only consider waiting a day for Jerry O'Connell well worth your time if you're ME. You guys should've made that assumption on your own by now, though. I mean, I AM the gal who featured both a sock puppet AND a hobbit in the past. It's not like my taste can be trusted.

In my opinion, however, if you don't think Jerry O'Connell is a total hunkazoid, there's something terribly wrong with the synapses in your brain. Because when I look at him, my synapses start firing like a dot-com gone belly-up (i.e. like crazy). Most of you probably haven't been in love with Jerry as long as I have, though -- I first developed a crush on him back in 1986 when he was playing Vern in the movie "Stand By Me" (you remember, the cute little chubby kid!). Despite the fact he shared the screen there with my major flame at that time, River Phoenix, I wasn't totally blinded by Rive's blond locks and serious looks. I still noticed Vern. Why? Because if I ever encountered that cast face-to-face, I wouldn't have been able to talk to any of them except Jerry. River Phoenix? Please! Like any 13 year old girl would've been able to talk to River Phoenix! And the same goes for Corey Feldman, though I wasn't nearly as into "The Coreys" (remember Corey Haim?) as some of my friends were. Wil Wheaton, maybe, but I didn't really know who he was then. Kiefer Sutherland? Fat chance! (In fact, that's one thing that hasn't changed -- if I ever meet Kiefer, especially now that he's all cleaned up and wearing dark suits on "24," I'd only be capable of idiotic babble and drool). Jerry O'Connell, though -- he looked like the kind of kid a kid like me could hang out with. Quiet and smart and simple. And also, of course, majorly cuddle-able.

I have recently discovered my flame for him still burns, even though he's lost that cute little belly and replaced it with an upper body that actually makes my eyes water (not that a cute little belly can't have the same effect, mind you). In fact, I will confess to you right now that the reason Jerry is the Boyfriend this week, at the very last minute, is because of his upper body, which was revealed to us again (last time I saw it was in "Scream 2," by the way) Monday night on "Crossing Jordan," a rapidly-improving little drama about medical examiners that is steadily growing on me. Especially now that they've added semi-regular police detective Woody (played by our Jer), whom Jordan refers to as "the Farmboy," but who is actually quite surprisingly intelligent. Not to mention DAMN sexy. I'll confess to hitting the pause button there for a minute when he was changing his shirt Monday night. It's tacky to say so -- I ought to just love him for his mind, his blue eyes, his talent, and his cute floppy hair, but I can't help it. Jerry O'Connell is GORGEOUS. His outsides makes my insides go *FOOM*!

Now, even though he's especially sweet on the eyes, I have also known all along that he's sweet in other ways as well. I've always liked him, actually, and thus have followed his career over the years. I've seen several of his movies (though I've occasionally wished I could un-see a few of them), used to watch him on "Sliders," and loved him in "Scream 2." I mean, who could resist him in that one scene when he serenades Syd on the lunchroom table? Not me, that's fer darn sure.

But it was really his character on "Crossing Jordan," which showed up maybe two months ago and has been in maybe five episodes max so far, that got my motor runnin' again (so to speak). Because Woody is PERFECT for Jerry. He's got the right combination of looks and personality for the character -- a sort of city-shy simpleness combined with a brain that makes you sit up and go "huh." To employ some of my favorite cliches, I'd describe both Jerry and Woody as having "down-home charm," "boyish good looks," and "a smile that makes you weak in the knees." That smile is a trademark if I ever saw one -- have you ever seen a smile so big it essentially used the person's entire face? I can't think of a single time when I've seen Jerry O'Connell smile and not been thoroughly convinced he meant it. I love that about him.

I also love that he's humble (saw him on a television show once where he was being interviewed and the interviewer plopped a laptop in his lap and took him on a brief tour of some of the fan sites out there dedicated to him. That smile surfaced often, along with some delicious blushes and statements like, "Wow." So cute!). He doesn't seem to know what he's got, that's for sure. (If he did, he'd insist on taking his shirt off more often, for one thing. Jerry, your pecs make me want to weep, babe. And I'm not even all that fond of chiseled musculature.).

Incidentally, while we're on the subject, I wanted to warn you that quite a few other actors in "Crossing Jordan" will be appearing as Boyfriends in the near future. I had my doubts about the show the first few times I watched it, but it's really grown on me. Jill Hennessy is pretty awful, I have to confess. But even though she's got the title role, I honestly don't feel like she's the "star." The other characters get about as much screen-time and they are WONDERFUL (long live "Bug," who is my favorite morgue employee!). So, anyway, if you watched it in the beginning and then gave up on it, you might give it another try. Just ignore Jordan and her rather irritating facial mole (where did that come from, anyway?). Concentrate on Lily and Bug and everybody else instead. It's no "C.S.I." but it's fun nonetheless.

Alas, I digress (big surprise there!). Let's do a little biography now about Jerry. First things first, he was born Jeremiah O'Connell on February 17, 1974. At age six, he started taking acting lessons and soon, encouraged by his parents to explore many of the arts, was also taking lessons in the piano, gymnastics, and even fencing (touche!). By age 10, he had already landed a commercial (for Duncan Hines) and it wasn't long after that he got the part of "Vern" in "Stand By Me," a movie that you have absolutely NO EXCUSE for not seeing, if you haven't seen it yet. (Get hot!)

After "Stand By Me," he took a little hiatus from acting to concentrate on school. By high school, though, he was back at work, appearing in the TV series "My Secret Identity." In college, he studied film at NYU, where he also joined the men's fencing team (en garde!) (am I impressing anyone with my lame knowledge of exclamatory fencing phrases? I thought not.). Incidentally, he was no slouch with a sword -- he was even asked to join the US Olympic Fencing Team, but passed it up in order to focus more seriously on acting.

In 1995, he graduated from NYU and because seriously pursuing an acting career. It was shortly after that that he landed the starring role on "Sliders," a pretty decent sci-fi show that ran for three years on FOX and then was picked up by the Sci-Fi network for another two seasons (though Jerry only stayed for 4 seasons total). In 1996, he showed up in two pretty major films, "Jerry Maguire" and "Joe's Apartment" (the latter is one of the ones I wish I could take back). In 1997, he took off his shirt for Neve Campbell in "Scream 2" (lucky girl!) and in 1999, he starred in the TV miniseries "The 60's" (which I never saw). Recently, he was in "Mission to Mars" which was an unsatisfying stinker, like most modern science fiction films about the Red Planet. I can see I'm going to have to start working on my own screenplay here. . .

Lessie, what else? He's 6' 3" tall (my lips twitch at the very thought). He's got blue eyes and a dog named Blackie. He loves Frank Sinatra, fencing, surfing, baseball (Yankees fan, unfortunately), pistachio ice cream, kareoke, and the phrase "That's classic." And that scar on his upper lip? It's from the 74 stitches he got after he was attacked by a dog at age 11 (and you wonder why I fear dogs I don't know. . .).

Incidentally, before anybody emails me to correct any of this information, let me just clarify that I got it all off the web at the sites listed below. To be honest, I don't actually care whether any of it's true or not. And, frankly, neither should you. Cuz we love him anyway, regardless of the fact he's a stinkin' Yanks fan, right? (My apologies in advance to future Boyfriend Derek Jeter.)

Coming up next for Jerry are a few interesting projects. First, there's a future for him on "Crossing Jordan," I'd assume. Surely their ratings are going to go up if they keep having Woody change his clothes on-camera. Additionally, he's got one movie scheduled for release this year. It's an action/comedy called "Down and Under" about two childhood friends, a New York hairstylist (Jer) and a would-be musician, who get caught up with the mob and are forced to deliver $100,000 to Australia. Of course, though, things go haywire. Especially after a wild kangaroo makes off with their funds. I'd say I feared it, except that I noticed it also stars Christopher Walken. And the image of Christopher Walken being in any way involved with a wild kangaroo who's got a hundred grand stashed in his pouch is already making me chuckle. What can I say? There's no accounting for taste, that's for darn sure. The bad news is, it's directed by the same guy who did "Coyote Ugly." The good news is, it's co-written by the guy who wrote "City Slickers" and "Parenthood." There's hope for it yet.

And until then, we have more episode of "Jordan" to look forward to. If you watch it and ya still can't stand it, you can at least start taping it and just fast-forward through the scenes that feature Woody fully-clothed. But, my god, you just must not REST until you've seen that chest. Seriously. It's going to change your life.