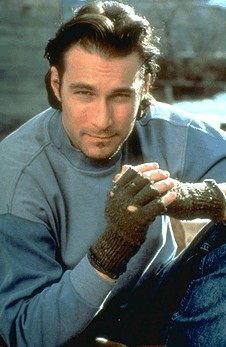 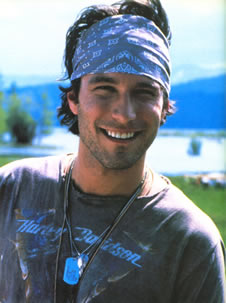 Well, it's been awhile since this happened -- since I had a write-up planned for the week, all ready to go, prepared, researched, written, hilarious, perfect, and then BAM! Just days before it's scheduled to run, some other guy comes along and, in a coup I can't aptly describe as "bloodless," given its effect on my heart (har!), usurps the title of Boyfriend and takes over the entire site. Kinda like Idi Amin, except with a lot less killing and greed.

Funny it should be this guy, too, because I've actually been madly in crush with John Corbett since high school -- since the days of Cicely, Alaska. The days of Chris Stevens, K-BHR (K-Bear) radio, and "Northern Exposure."

I can't be alone in this -- I know tons of you remember that show and were also totally nuts over "Chris in the Morning" and his quite deadly mixture of philosophy and charm. He was perfect -- deep AND shallow, all rolled into one totally hunky package.

And by that I mean: TOTALLY. HUNKY.

But then I went to college, the show died, I got other interests, and John Corbett kind of disappeared. I kept my 8x10 glossy of him pinned to my bulletin board, where it still sits today, but I really haven't thought much about him since those chilly Alaskan nights we spent together, a gazillion years ago.

So, what happened to bring him back to front and center? Why, I took a train trip, of course!

Okay, so, nothing out of the ordinary there. I take train trips regularly -- about every two months, actually. But this time someone was lookin' out for me. Because usually, you see, they show a movie on the train. And usually, you see, those movies are . . . how should I put this? Well, uh, GOD-AWFUL. For example, since I started my frequent train travel, I've been subjected to the following films, some on more than one occasion: