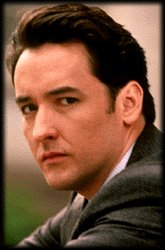 The very first question I'm sure this week's Boyfriend inspires is: "What took you so long?!"

Answer: dunno! I'm just dumb, I guess! Because obviously I love John Cusack. I mean, WHO DOESN'T? He's tall! He's dark! He's handsome! So, I apologize for being such a loser on so many levels. Really. But give me a few points now for finally getting on the ball? Because there he is. Right up there. In full-color and everything.

Allow me to begin with a timeline of my Cusack infatuation.

It all began when I was about 13 or 14 years old. I was babysitting, a job that I always found particularly horrifying until about 8pm when the kids FINALLY went to bed and I could just sit back and watch their parents' cable tv (and, I might add, get PAID to do it). Anyway, they had the Disney channel and I was flipping by it that night, probably munching on something and drinking a pilfered soda from the fridge, when I noticed a movie on that looked kinda interesting. So I started watching. It was about a girl, about my age, whose father took a job a long way away and left her in the care of a neighbor. Only the girl hated the neighbor and wanted to be with her dad so she ran away and started trying to track him down. On the way, she runs into a fellow run-away, a guy with a crooked smile (notice a trend here?) and dark hair and lots and lots of street smarts.

Eventually, they smooch and blah blah blah and the movie ends.

The girl's name was Natty Gann, by the way, and The Journey of Natty Gann remains one of my all-time favorite movies. I was S-M-I-T-T-E-N by the boy, too, whose name you can probably figure out on your own now. But back then I didn't know who he was and I wasn't a major movie buff and so several years went by before I saw him again.

Then one night my brother brought home the fantastically ridiculous movie Better Off Dead, and LOOK! There's that guy again! I watched it about a zillion times and we finally got a copy of it from somewhere and so I watched it about a zillion times more. Each time, thinking, MAN, that John Cusack guy sure is a babe. When I hit high school, I finally saw Say Anything, and that's when all the rest of everybody I knew fell in love with Johnny too. I mean, who doesn't have a perfectly clear picture of that scene where Lloyd(Lloyd, all null and void) stands outside the girl's window holding a boombox above his head that's belting out "In Your Eyes" by Peter Gabriel? Didn't we all run right out and buy that tape and listen to it over and over?

You liar! YOU DID SO!

Since then, I've seen just about everything John's been in. Most have been fabulous (hey, the guy can act too!), though some have been so bad I've only managed to sit through them because he was there (example: Midnight in the Garden of Good and Evil, just about the worst movie I've ever seen, Jaws II, III, and IV not included).

A list of the best things about John Cusack:

He's got a new movie coming out, by the way. It's about air traffic controllers and is supposed to be a comedy. Though I, personally, don't think anyone should take air traffic control lightly. Particularly air traffic controllers. However, despite all that, I have a good excuse to see it, because I need to expose my mom to some Billy Bob Thornton now that she's seen Sling Blade. (Wasn't your first non-Sling-Blade-Billy experience a shocker??). Plus, I'm pretty sure my mom likes John Cusack, too, though she probably got tired of us running around exclaiming things like "This is REAL SNOW!" or "Man, dissed in the MALIBU!" (my first car was a Chevy Malibu, btw). Mom's such a good sport.

Go check out the IMDB page for John Cusack anytime you are looking for a list of good movies to rent over the weekend. You can't really go wrong, even if you go wrong. He's good that way. He's a sure thing. Even if it was a movie about a guy sitting around clipping his toenails, it'd be worth two bucks to see him in it. And you just can't find a better compliment than THAT. 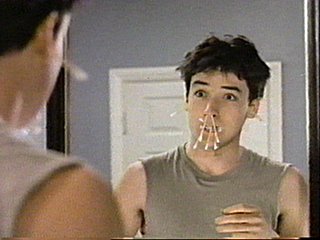