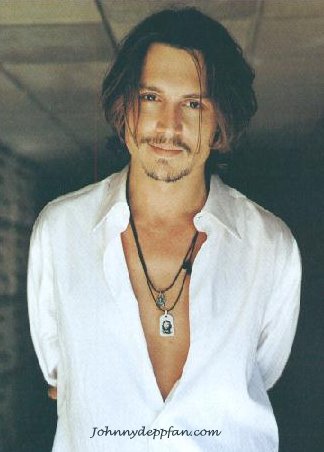 Finally! The Boyfriend of the Week hath returned! But before we actually get into the drooling, I wanted to mention a few things about the redesign. First, let's give credit where credit is due -- reader Elizabeth Morrow is to thank for the new look. Without her nudging and work, I never would've gotten around to doing this and I've been wanting to for a reallllly long time. So, thanks Elizabeth!

Secondly, before we get too carried away with it, I wanted to make sure nobody is having any problems loading the page, viewing it, navigating through it, etc. If your browser is old and the thing looks like heck and you're never coming back, please EMAIL ME! I need to know! It's still a work in progress (for one thing, I haven't applied the design to anything but this page and the current books one so far). But my main goal is to have a site that looks good for everybody, not one that only looks good to those of us who have fancy-pants computers. So, be honest. Send me screen shots of how crappy it looks in Netscape 2.0 (although, to be honest, if you're using Netscape 2.0, we need to talk). Etc. etc. etc. Okay?

Now, let's get down to bidness. Holy heck! Why in tarnation did it take me so dang long to get Johnny Depp up here? Am I nuts? Blind? Stupid? On fire? Trapped under something heavy? No, it took me so long because I'm timid. I'm shy. And I know when I'm totally outclassed.

I know, I know, I'm sure you're all saying, "But Meg, how can that be true? You're the hippest girl I know!" But it's all an act, you guys. In reality, I'm a DORK. And while I spent my early teens drooling over Johnny (as Tom Hansen on "21 Jump Street" -- raise your hand if you're old enough to know what I'm talking about), when I hit my 20's I started to realize something about him: he was cool. No, I mean REALLY cool. And while this is not to say that other Boyfriends have been dwebes in comparison, there's something about Johnny Depp's coolness that shoved him into another realm for me. An untouchable don't-even-THINK-about-it kinda realm.

And there he sat for many, many moons. I sort of stopped paying attention to his career. Stopped following the news stories on him. Stopped keeping track of his girlfriends. He was outta my league. There was even less hope than there usually is in these matters. In short, I knew it was beyond pointless to continue smooching that poster over my bed every night. To continue dreaming that he'd turn that "Winona" tattoo into a "Meg" one instead. Nope, no matter how many times I squinted my eyes closed and prayed, that tattoo went from "Winona" to "Wino" instead, and that was pretty much that.

Lately, though, I've been getting a lot of messages from you guys about Johnny. He's settled down, gotten serious. Had a kid. And continued to stick to his distinctive criteria when it came to choosing movie roles (when was the last time you saw Johnny Depp in a "regular" movie? Uh huh, never!). He's blossomed, ladies and gentlemen. He's given up on hotel room trashing (yeah, it's bad, but it's sorta cool too, really) and dating wafer-thin models. Instead, he's gotten older, started a family, chilled. He's even started to shave and cut his hair short for his next movie (more on that later). In short, he's lost a few punk points (or whatever they called them in YOUR high school), which has brought him down to a much more accessible level.

Not that I'll be holding my breath or anything. But I could see Johnny Depp ego-surfing on the web someday, stumbling across my site and dashing off a nice email, couldn't you? Of course, when I see it, he's also nekkid -- I don't know what you're seeing when YOU see it.

Anyway, the movie that really spurred me back onto the Johnny Depp trail was "From Hell," co-starring ex-Boyfriend Robbie Coltrane (who can do no wrong in my book). It's a fine film about Jack the Ripper. Johnny plays a crack detective on the Ripper's trail. Well, maybe I should describe him as an "opium" detective instead, since that was actually his drug of choice in the film (bah ha ha!). While I had a few problems with the plot (his romance with Heather Graham was totally unbelievable in my opinion, for one thing), overall, it's pretty enjoyable. Johnny looks messy in that really really cool way he has (his talent for controlled messiness is well-touted -- he even calls himself "Mr. Stench" from time to time) and he solves crimes and saves girls. All qualities to admire in a young lad, don't you agree? Of course, what's even better is that he does all this with Robbie Coltrane at his side. Bonus points for Johnny!

Why I liked the movie so much had a lot more to do with the look of the film, which is very comic book-esque (it's based on a graphic novel, so that makes sense), than the actual plot, to be honest. And it was a look that looked good on Johnny Depp. Dark and serious. Intense. With lots and lots of black. Johnny looks good in Black and Serious. Tall, dark, and brooding: a combination that can get tiring if you marry into it, but which can be quite thrilling early on in a dating relationship.

I've also seen a few of his other most recent movies, including "Blow," which was pretty entertaining, although Johnny Depp should never go blond EVER AGAIN, and "Chocolat," which I actually have to confess I couldn't get in to. I'll have to try again when I'm more in the mood for something like that. But Johnny looked great in it, I'll say that much. Though how much that is, it's hard to say. It's sort of a given, actually, that he looks great. I can't think of a time when he hasn't.

Some of my other favorites of Depp's include:

And, of course, how can we EVER forget Johnny's first motion picture ever -- "Nightmare on Elm Street" -- in which he is eaten by a mattress. And he did it with such genius! Such talent! I have never seen anyone eaten by a mattress in quite the same way since. Truth.

Now, of course, rare is it to find an actor who hasn't made a single movie I thought stunk, and Johnny is no exception. For every "Donnie Brasco," there is an "Astronaut's Wife." But that's okay. We all make terrible, horrible, oh-man-what-were-you-THINKING? mistakes like that from time to time. The difference between Johnny Depp's mistakes and ours is that his pay a lot better, right? The good news is, coming up for Johnny are only things that look good. For example, there's the role for which he's cleaned himself up -- playing J.M. Barrie in "Neverland," a film about, uh, J.M. Barrie. Who you might better recognize described as thus: the author of "Peter Pan." Johnny will also be showing up in "Once Upon a Time in Mexico" as a corrupt CIA agent messing around with Mexican drug lords. For every nice author-of-childrens'-books role, he must do an El Stinko role, right?

Other than that, Johnny's just planning on kicking back with his cool new daughter -- doin' the Dad thang. And for that, he scores even more bonus points, because, say it with me now: Dads Are Cool.

A little biography on Johnny (you can find out much more on the web at one of the gazillion fan sites out there about JD): he was born on June 9, 1963 in Owensboro, Kentucky. His parents moved to Miramar, Florida when he was young. At age 12, Johnny's mother gave him a guitar and by the time he was 16, music was his obsession. He dropped out of high school right about the time his parents divorced and began focusing on his music completely, playing for a group called "The Kids," which opened for several prominent acts like Iggy Pop. He and the band eventually moved to LA to try to make it big, but their California rocket never took off and Johnny eventually had to take other jobs in order to pay the bills. At age 20, he married makeup artist Lori Allison, but they soon divorced when Johnny started selling pens over the phone to make ends meet (can you blame her?). Before they broke up, though, Lori had introduced Johnny to actor Nicolas Cage. Nick convinced Johnny to try acting and signed him up with an agent. When Wes Craven asked his daughter to pick someone for the part of Glen in "Nightmare on Elm Street," she pointed her finger at Johnny, and a new career began.

After a couple of little movie roles and then a dry spell, Johnny as convinced by his agent to take the role on "21 Jump Street." The show became a crazy hit and Johnny was quickly propelled to teenage heart-throb status, which he hated (hard to feel too badly for him, though, isn't it?). The show lasted 4 years and left Johnny with a sort of "cutesy" image that he then worked hard to dispel. He started by spoofing his teen idol role in the movie "Cry Baby," and then went on to make a series of movies in which he played odd characters. As his career moved forward, critics began to respect him as a talented and diverse actor, capable of playing just about any part. In 1991, he was awarded the Star of Tomorrow Award and has since been nominated for three Golden Globes.

We all know the story of his relationships with Winona and Kate Moss. Much more quiet has been his relationship with Vanessa Paradis, which began sometime in 1998. On May 27, 1999, Vanessa gave birth to their daughter, Lily-Rose Melody Depp. The family currently resides in Paris.

Aside from acting, Johnny has always maintained his connections in the music world. He owes a club in Los Angeles called "The Viper Room" (ironically, the club outside of which my other major teenage crush River Phoenix died in October 1993) and occasionally plays there in a band called "P." He also co-owns a restaurant in Paris called the "Man Ray."

Despite Johnny's critical acclaim and gigantic, enormous, crazy fan base, he has never been nominated for an Academy Award. Nevertheless, he's an actor who takes his job seriously and has never let himself be pressured by hype. He continues to choose challenging and interesting roles for himself and is constantly growing, both as an actor and as a Boyfriend (wink). Though he's had his share of life's insanity, he seems to be coasting on a pretty peaceful and happy road at the moment. Which, lucky for us, makes him a lot easier to fall in crush with. Well, the fact he looks FABULOUS in leather pants isn't hurtin' him any either, but that's neither here nor there. . .

So, there's your Johnny Depp write-up, y'all. And with a brand new hip layout ta boot. Could you ask for anything more on a drizzly Monday morning? Have a good week and see ya next Tuesday, June 25th.