Note: all photos of this week's Boyfriend were taken by master band photographer Ryan Schierling and are used here with permission. Take a few minutes to check out his web site -- you will be impressed (I command you!). 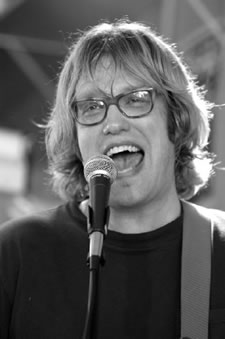 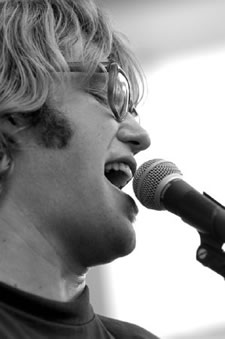 Earlier this week, while I was listening for the dozenth time in two days to the newest album by this great local band I just discovered, I got to thinking about all the Boyfriends I've ever featured who are musicians. It's been awhile since I read most of their old write-ups, but I'm fairly certain that many of them mention the fact that I don't like pop music. I don't listen to pop music. I don't go to pop music shows. Pop music is something I don't keep up with -- something I've had little appreciation for since about, oh, 1988 or so. When I glance at the Top 40 lists, I usually recognize a couple of the performers, but absolutely none of the songs. It took me about two years to figure out that P.Diddy and Puff Daddy are the same person, and even now I wouldn't be surprised to hear I've still got that wrong (my apologies to P. and Puff if I do).

And yet, oddly, many of the musical Boyfriends are pop musicians. At least, as far as my own personal definition of "pop music" goes (classification of music into genres is a pretty subjective thing, in my opinion). But anyway, look at Neil Finn, Bruce Springsteen, Gary Jules, and even Sicko, though I'd actually file those guys under the subheading "poppy punk." Regardless, that's a lot of poppin' Boyfriends for a girl who never watches MTV (you know, except for "Surf Girls" at 10:30 pm Monday nights).

After giving that some thought, I came to a realization about myself. And that realization is this:

Now, in my original draft of this write-up, I went on for about six more paragraphs about why I prefer punk shows to pop shows, but pop CDs to punk CDs. There was a bunch of analysis about live music versus recorded music and some talk about energy and pretension and judgments and raw emotional intensity.

But I got halfway through while I was typing it up and suddenly realized something else about myself: I hate talking about music. Especially when I'm talking about it defensively -- to make sure you understand that though my choices may be questionable on the coolness scale, I AM STILL COOL. And what's even worse is that I don't actually know anything about music. Most of the time, I can't even tell you the name of the band I'm listening to at the time, let alone put into intelligent words why I'm listening to them in the first place. It's cuz I like them. And that's not only reason enough, in my opinion, but it's darn cool too.

Now, actually, that bit about hating musical shop talk isn't quite accurate. I like talking about elements of music. I'm a classically trained pianist, for one thing, and I think that's why I hear music in layers when I listen to it -- each instrument, each voice, each note pulled out and running separately together -- and I love running into the rare person who also listens to music that way and can talk to me about it. I can talk about how a song is put together and I can tell you if I like the end result or not. But I'm just not one of those people who likes to argue about why Song A is better than Song B. Why pop is better than punk. Or vice versa. It's not only boring, but, to me, utterly meaningless. And if that makes me an uneducated dork, so be it. I know what I like. And it's time to stop apologizing for liking it.

Wow, not that this has anything to do with my original point here. Hello, Tangential Central? I'd like to book a ticket on the express train to Off-Topic. Yeah, 'kay, so let's just go back and skip that whole mumbo jumbo part and head on back to the first sentence of this write-up instead. The one about me listening to the new album by this great local band I just discovered.

The album: When I Pretend to Fall

The band: The Long Winters

I first heard about this band about two weeks ago when I finally got back in touch with a friend I hadn't spoken to in a really long time. He casually mentioned that he was about to head out on tour with this great new band he was in called "The Long Winters." Curious, particularly because I'd been such a huge fan of his last band, "Harvey Danger," I went on-line, as librarians are wont to do, to look for more information. I promptly stumbled across the band's web site, which is a lot of fun to kick around on and even has a message board packed with intelligent, funny users who, I'll be damned, can actually SPELL (a rare find in the Internet message board world, I assure you). But, even more importantly to me at the time, the site offers downloads of some of the band's latest tracks.

So, I immediately picked a tune at random (this one, as a matter of fact, courtesy of Barsuk Records), plugged in my headphones, and gave it a listen.

My immediate reaction was that The Long Winters sounded a lot like Guided By Voices, which is a very good thing even though Robert Pollard and I are no longer on speaking terms ever since he badmouthed both Frank Black AND Bob Mould in a single show (philistine!). Liking what I heard, I immediately clicked on the link to buy a copy of the album and then sat back waiting for my CD to show up in my mailbox (long live the World Wide Web!).

When it did, I kind of set it aside at first. I was too busy watching ten hours of "Band of Brothers" for you guys (and for Damian Lewis) to find any time for listening to music. But when the weekend rolled around and I needed to run some errands, I popped it into my car stereo and was on my way. Okay, it's really a Walkman I plug into my tape deck, not a car stereo. I drive a Volvo that is older than Elijah Wood, after all (how's that for ex-Boyfriend name-dropping? Am I good or what??).

It was a beautiful afternoon, that one, sunny and unseasonably warm. I was rolling down the windows as the first track began to play. And the whole scene combined -- the hot day melting onto my forearms, the breeze in what's left of my hair (got a major chop a few weeks ago), the incredible music pumping through my ancient Swedish sound system, the freedom of The Weekend stretched out before me like a cat in a sunny patch -- it was as close to perfection as a mere mortal can hope to come. I ended up taking as many detours as I could, just to keep from having to get out of my car and stop the music. The errand running that typically takes me about 45 minutes lasted more like two hours. And I returned home all jazzed up, with a sunburn on my left elbow and an empty tank of gasoline in my car.

So, next time you see John Roderick, feel free to blame him for all the smog in Seattle. Because his music makes me want to guzzle gas like a Humvee. And I bet I'm not the only one.

It's not only catchy stuff though, it's also clever and extraordinarily well put together. The lyrics are funny, touching, sad, satirical and just plain nuts, all wrapped into one, and the music itself is packed with complex layers and crafty touches that kept making me shake my head in shock and awe (bombs away, George!) (sorry). Like the mandolin that shows up in "Cinnamon" just as the lyrics begin to talk about gondolas and saints. Or the crash and burn at the end of what is otherwise a totally standard, sappy pop ballad called "Blanket Hog." This is clearly music written by a group of guys who are not only talented, but having a damn good time. It comes through on every song. It is infectious.

But enough about that, let's talk about John!

I don't know anything about John.

Well, that is, other than the fact that he's from my neck of the woods and has been involved in music for years both locally and in places like New York and Alaska. In one photo I saw of him, he also appeared to be wearing a wedding ring, but since I am too, I figure that's just another thing we have in common. Other than that, any biographical information I might provide would be solely invented. And while that can be fun (see Secret Agent Jack), it can also get you in a bit of trouble these days. And besides, I know Jayson Blair (not really). And I, sir, am no Jayson Blair.

So, instead, I'm just going to wrap this write-up up with a single command: BUY THIS ALBUM! It's going to make your entire summer. And feel free to send your gas bill John's way. I'm sure he'll understand.