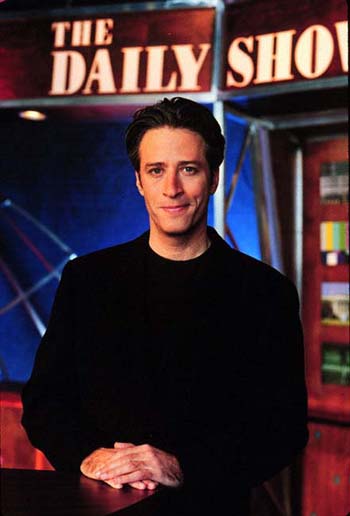 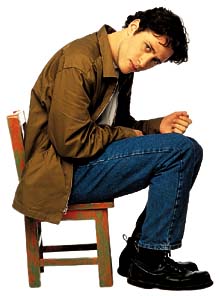 This week's Boyfriend is going to make the entire day for several of my regular readers. How do I know this? Because they have begged. They have pleaded. They have gotten down on their KNEES. Askin' for me to feature their comedic hero, Mr. Jon Stewart!

Two things that happened to me recently have brought about this happy selection. The first was that about three weeks ago, I noticed that Jon's spoof-news broadcast "The Daily Show" was not actually only on after my bedtime. It was also on at 7pm (if you guys had told me that sooner, you wouldn't have had to wait so long, incidentally. Never give incomplete information to a librarian! We hate that!). That day, I made a mental note to tune in to "The Daily Show." A mental note I promptly forgot (this ring any bells for you "Pretender" fans?).

But, luckily, something else has happened recently that got me thinkin' Jon Stewart thoughts again. What was it? Why, it was the presidential election, of course. What ELSE has been going on lately? But it wasn't a clear one-two connection kind of thing. I didn't see Dubya and Gore on television bickering about Florida and immediately think "Hey, Jon Stewart!" What happened was I read an article that was talking about the one good thing to come out of all this chad-crappola. And that one good thing was: comedy.

Becuase, truly, our comedians never had it so good! There's been fodder for more jokes than the airwaves can handle (which is why, I suppose, my email inbox has been jammed with them instead). Nice jokes, mean jokes, dirty jokes, insultingly bad jokes -- every color, every style, everywhere! And of the comedians named in the article as having some of the best "coverage" lately, Jon Stewart was the one most raved about.

The story quoted his quip: "When we decided to call it 'Indecision 2000,' we didn't know the people would really GO with that" -- and that was all it took to get my arse in gear.

So, I've been tuning in a lot lately, though I still fail to catch it daily. And I've also been writing down a few funny things to share with you in this, my Jon Stewart Boyfriend write-up. Here is a sample of just a few (two, to be exact) of the mighty, mighty witticisms of our new favorite comedian (this week, anyway):

Of Bush and Gore's merciless dedication to winning the 25 electoral votes in Florida: "They'd both roast their mothers over Kennedy's eternal flame and feed the meat to JESUS to get this job. Not that Jesus would take it, of course. . ."

Now, naturally, me typing these things out with no facial expressions or tone to go with them will be as effective in convincing you of Jon's knack for funny as putting the words to a good Tom Waits song in another write-up convinced you Tommy was king. But it's my page, the lines made me laugh, and besides, who's in charge around here anyway? Your job is to shuddup and listen!

The point I'm trying to make is that Jon Stewart's "Indecision 2000" coverage has been the only way I've managed to stay relatively informed of what's been happening lately. Because after about the first four days of newscast after newscast ranting about the chad problem, I banned all serious television news from my household. If I had to listen to one more commentator describe the difference between a pregnant chad and a dimpled one, I was going to have to kill somebody. And that's just not a risk I can afford to take.

For some reason, however, Jon Stewart talking about Bush, Gore, and Chad was a lot more tolerable. Maybe it's because of things like this:

"In a statement to the press, Gore announced that if every Florida vote is counted, 'there are more than enough votes to change the outcome and decide the election in our favor,' adding, 'and if we count them twice...man, we're talking landslide!'"

"Meanwhile Bush is going ahead with plans to assume the presidency and move into the White House, as made obvious by his placement of the Bush family lawn jockey, gallows and "all trespassers will be shot" sign on the White House front lawn."

Whoops, I'm doing it again. Suffice it to say you've taken my word on it in the past and you can do it now -- this guy is funny.

But is funny always enough? I mean, after all, Dan Quayle was funny and you don't see HIM being made into a Boyfriend. Yet according to a youngster who wrote me last week, it takes more than looks to make it up here too (I believe her direct quote was "Colin Mochrie is an ugly retard" -- don't worry, though, I know where she lives and I'm gonna go over and TP her house for that). And everybody is right -- it takes more than funny AND it takes more than looks. It also takes quirky expressions and/or interesting foreign accents, hobbies, or talents. For example, Jon Stewart has both quirky expressions AND an interesting talent (did you know he played soccer for William and Mary? (The college, not the couple)).

He also wins major points for having been the host of one of my favorite shows when I was younger -- "Short Attention Span Theater." Anybody out there remember this show? It was made up of clips from stand-up routines, tied together by commentary from Jon and co-host Patty Rosborough. The clips were all less than five minutes long, and usually extremely funny. I LOVED that show. It was brilliant. And therefore, it was also cancelled.

But I hadn't seen Jon Stewart since SAST was on (1992), so you can imagine my surprise when I tuned in to The Daily Show for the first time and noticed Jon's newest charming feature -- gray hair! Just a little sprinkle on the sides. And really not too surprising, since he's now almost forty (born November 28, 1962). Heck, my fiance is only 31 and he's got gray in all the same places!

I like it, though. I really do. It gives him a rather distinguished look which adds a certain sense of irony to the scene when he says stuff like, "I celebrated Thanksgiving in an old-fashioned way this year. I invited everyone in my neighborhood to my house, we had an enormous feast, and then I killed them and took their land."

A little background on Jonny. First of all, did you know his real name is Jonathan Stewart Leibowitz? Yeah, me neither. He was born in New Jersey, which explains quite a bit about his personality, actually. Hah, just kidding (that's for any New Jersey fans I might have). Alos, in case you doubted that I was serious when I said Jon Stewart was a smartie (oh wait, I don't think I got that far -- Jon Stewart is a smartie), I'll have you know he was third in his high-school class and started at William and Mary as a chemistry major.

Granted, he switched to psychology later, but let's not make any assumptions based on that. After all, I start out as a biochem major and ended up an English one, and it doesn't mean I'm a complete loser. Right? You bet your chimichangas, I'm right.

As I mentioned earlier, Jon Stewart used to be an avid soccer player. In fact, one source even said he played on the 1983 U.S. Pan-Am Maccabiah Team in Brazil. I said "one source even said" because it's kind of hard to tell sometimes whether or not the writers of Jon Stewart biographies are ALSO hamming it up just like their subject does. I don't want to say something stupid and then get teased later, so what I'm trying to do there is cover my hiney. And just in general, you should be aware that most of my information on Boyfriends comes from fan sites on the web and that means you should NEVER trust that anything I say is actually a fact.

And that's a fact.

After Short Attention Span Theater, by the way, Jon didn't actually disappear from the planet (he just disappeared from MY planet). He went on to host the MTV shows "Remote Control" and "You Wrote It, You Watch It" and then he went straight to the top with his own late night tv show "The Jon Stewart Show" (points for creativity with the name, there, Jonny). The show started out as a half-hour project on MTV, but quickly was taken over by Paramount and turned into a one-hour nationally syndicated one. It was very highly acclaimed, and thus it was cancelled after only two years. (Notice any trends here? Yeah, me too.)

He did a few more shows, hosted a few episodes of "The Late, Late Show" when Tom Snyder went on vacation, and was considered a shoe-in for a permanent position there when Tom decided to hang up his hat. Luckily for us, however, Craig Kilborn took over that show, and we got Jonny on "The Daily Show" instead.

And so the story ends happily for all the little boys and girls in the kingdom. But actually, it ends even happier than that. Miramax has signed Jon up for two movies a year, and he's also planning to do a little writing and producing while he's at it. That means we'll be seeing a lot more of Jonny around, which is a very good thing. He's also got a book out, if you aren't into watching television or films (you freak). It's titled "Naked Pictures of Famous People" but is actually a compilation of funny essays, not of actual nekkid pictures.

In short, Jon Stewart is everywhere. How I missed him for so many years, I still can't figure out. The good news for you, though, is that you now have no excuse to miss him anymore yourself. Consider yourself filled in, educated, and all warmed up. Time to get back on the Jon Stewart bus, y'all! It's gonna be a long and wild ride!